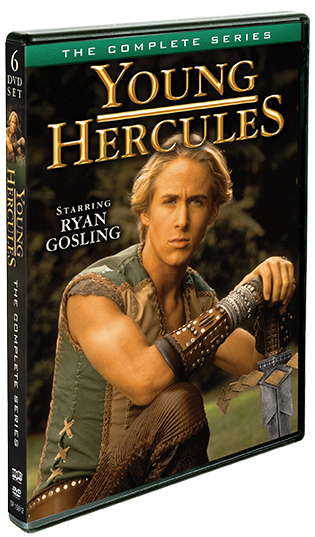 This prequel series to the smash hit Hercules: The Legendary Journeys explores the dawn of an ancient age of light and darkness as the half-god, half-man Hercules (Ryan Gosling, The Notebook) — along with his friends, Prince Jason (Chris Conrad, Mortal Kombat Annihilation) and Iolaus (Dean O’Gorman, The Hobbit Trilogy) — struggles to find his place in the world and learns what it means to be a hero.

I used to love watching Hercules and Xena on the weekends.  Sure, it was cheesy but it was fun and action filled.  Even Anthony, who grew up in Jamaica, used to watch both series.  They were definitely popular series!

The episodes are only 24 minutes long but they managed to stuff plenty of action and character development in to make up for it.  This series is better geared towards families and somewhat younger children as there is almost no sexual content compared to the original series.  There are still plenty of comedic elements just as in the original series however and there are some recognizable characters as well (Ares, Discord and Strife).

I noticed that the episodes are arranged according to airing rather than rearranging them into the correct chronological order.  For some reason when the series was aired there were episodes that came off as being out of place as we are just introduced to characters that Hercules had previously been the best of friends with.  It’s more of an annoyance that they are out of order than anything, and it would have been  nice to see them arranged in a chronological order rather than the airing order.

This is a really fun DVD set worth picking  up whether you were a fun of the original series and didn’t catch Young Hercules while it was on air or if you did catch the series and want to re-watch it.