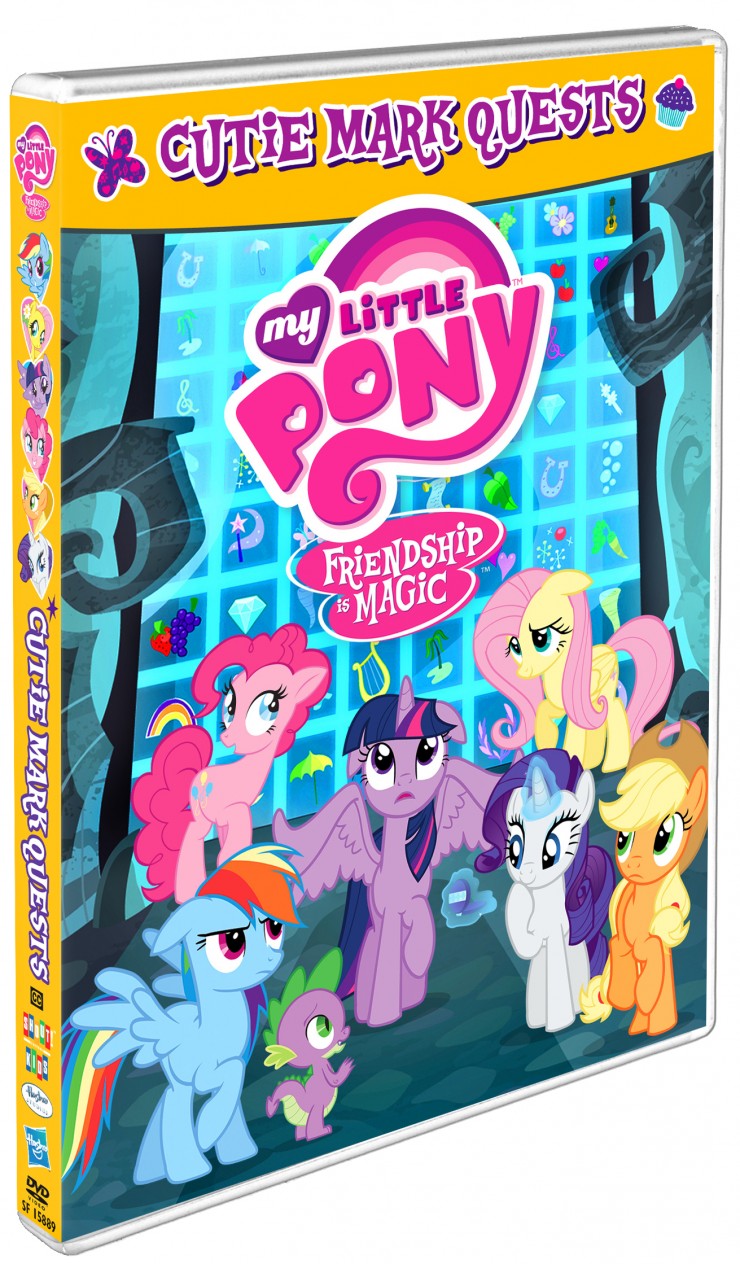 My Little Pony, one of the most popular television series on Treehouse TV, has a new DVD coming June 30th, 2015! In the new release titled, My Little Pony Friendship is Magic – Cutie Mark Quests, join Twilight Sparkle and her best friends as they use their special talents and the magic of friendship to keep Ponyland safe and fun. The DVD includes 5 heartwarming episodes that we know your little princess/prince will love!

Join The Quest That Everypony Must Take: To Find Their Own Cutie Mark!

In Equestria, being true to yourself is the key to earning your cutie mark. But staying true to yourself is just as important! Join Twilight Sparkle, Apple Jack, Pinkie Pie, Rarity, Fluttershy and Rainbow Dash — as well as everyone’s favourite Cutie Mark Crusaders, Scootaloo, Sweetie Belle and Apple Bloom — as they journey to find their own Cutie Marks, take on the spirit of chaos and disharmony and visit a village where… everypony has given up their Cutie Marks?! It’s all here in Cutie Mark Quests!

The Return Of Harmony, Part 1

The Return Of Harmony, Part 2

In the DVD’s first episode, The Show Stoppers,  we find Apple Bloom, Scootaloo, and Sweetie Belle on a mission to get their cutie marks.    They enter a talent contest in the hope that they will discover their true talent.  In the end they realize it’s best to just be content with what they already have.The Return Of Harmony follows the Mane 6 as they work together to stop Discord from creating chaos in Equestria.  This is a really fun episode and Keira loves the part where it starts raining chocolate milk.

The Cutie Map is my favourite episode on the DVD, and takes a look at cults in a subtle way that children will understand.  The ponies are led by a map to a village filled with ponies sporting the same cutie mark and giant creepy smiles.   Conformity is the rule in this village and it a good example of the type of conditioning and brainwashing typically found in cults.

The DVD also includes the sing-along for “In Our Town,”  from The Cutie Map, Part 1.

One Frugal Mom Eh reader will win a My Little Pony: Friendship is Magic – Cutie Mark Quests DVD of their own!  Giveaway ends on July 3rd at 11:59 pm EST and is open to CAN/USA.  See Giveaway Tools form for entry and T&C.

If I were a pony my cutie mark would be a bird. I love birdwatching!

A book because I love to read :)

My cutie mark would be a cupcake because I love to bake.

Mine would be a heart, because I think I have a big one.