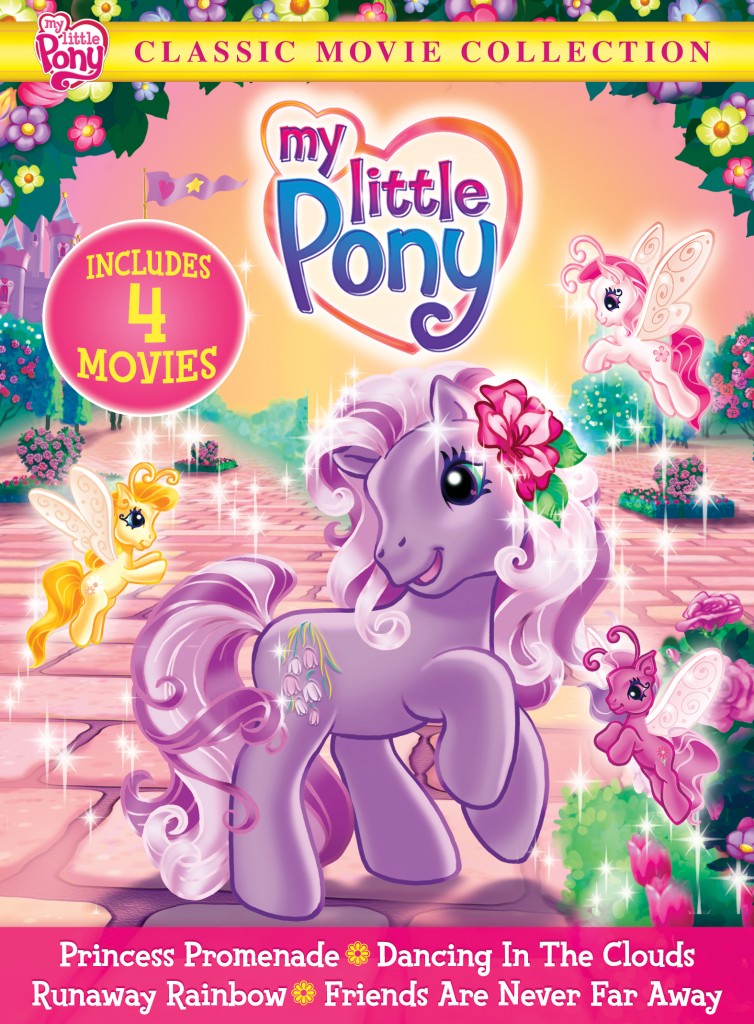 Four beloved My Little Pony films have returned to DVD in the U.S. and Canada with the My Little Pony: Classic Movie Collection! The 2-disc set contains the films Princess Promenade, Runaway Rainbow, Dancing In The Clouds, and Friends Are Never Far Away.

In the highly popular Princess Promenade,Wysteria is beaming with pride! Her gardens are in bloom, her little Breezie friends are in town, and it’s time for Ponyville’s fanciest spring parade, the ultimate celebration of flowers! But things don’t go according to plan when Wysteria accidentally awakens Spike the Dragon, a sleepy, silly, 1,000-year-old dragon! For you see, legend holds that when a dragon is awakened, a new princess is about to be crowned! But who is the Princess of Ponyville?

If it’s all about rainbows it must be about Rainbow Dash. And it is. In Runaway Rainbow,Rainbow Dash loves the time of year when Ponyville and Breezie Blossom are all about celebrating rainbows. Meanwhile, in a new magical place called Unicornia, Rarity is being taught how to be a Unicorn Princess and the importance of making the first rainbow of the season. But Rarity embarks on an incredible ride that includes a magic wand, falling through the clouds right into the middle of Breezie Blossom, a visit to Ponyville, meeting Spike the Dragon, and a huge adventure as she tries to get back to Unicornia. She soon realizes that getting home in time to create the first rainbow of the season is not an easy thing to do – but it is fun!

In Dancing In The Clouds, the Friendship Ball is coming up, and Twinkle Twirl needs to come up with a special dance. A roller coaster ride with friends makes her feel like she’s “dancing in the clouds,” so Sky Wishes helps her make an extra special wish to come up with a dance to make everyone feel that way.

In Friends Are Never Far Away, good friends Sky Wishes and Starcatcher the Pegasus want all of their friends in Ponyville and Butterfly Island to meet. Pegasus ponies are very shy however, so the two plan a special party with music, games and a Pegasus-favorite, ice cream. The party planning doesn’t go so smoothly, but it’s quite an adventure!

I grew up watching My Little Pony thirty years ago, and it is still very popular with children today.  I love that my daughter also has the chance to grow up with my little pony and their positive messages.  My Little Pony: Classic Movie Collection features 180 minutes of classic My Little Pony fun!

Love this movie. My daughter is a huge fan of My LIttle Pony, its such a cute little show!

My girls are huge My Little Pony fans! They'd love this!

Wow, I didn't realize My Little Pony has been around for 30 years! My daughter loves it!!

I loved My Little Pony as a child. Now my little cousins love it.

oh, my granddaughter would love to have these. She love My Little Pony.