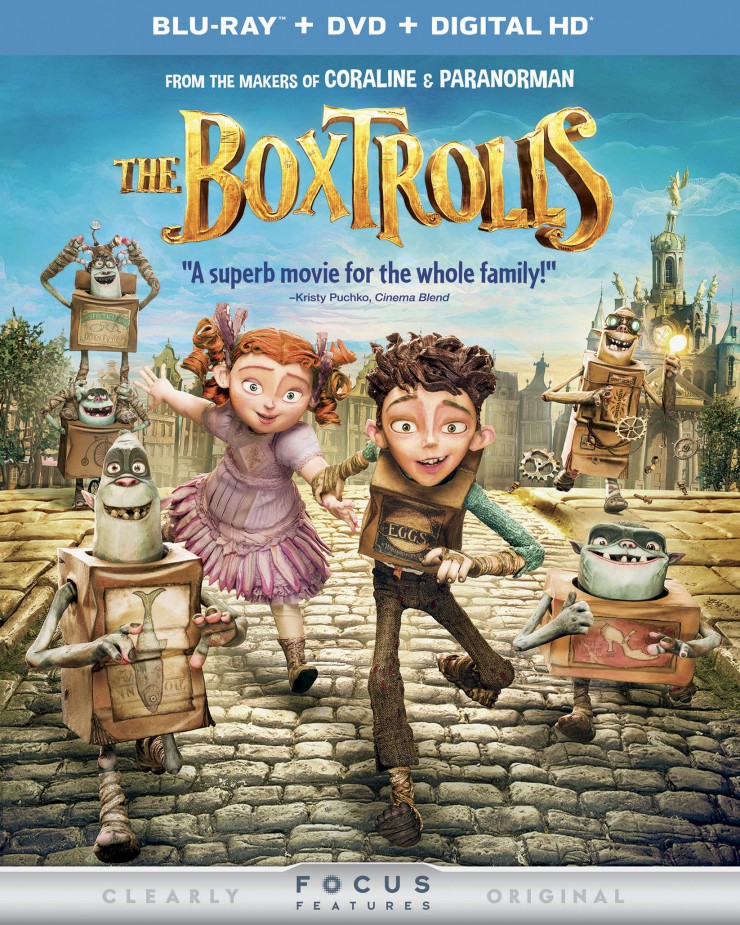 Heroes come in all shapes and sizes in the family movie The Boxtrolls, based upon the book Here Be Monsters by Alan Snow!  Starring, in voice performance, Academy Award winner Ben Kingsley, Isaac Hempstead Wright (Game of Thrones), and Elle Fanning (Maleficent), The Boxtrolls is now available on Blu-ray™ 3D and Blu-ray™ Combo Pack including Blu-ray, DVD & DIGITAL HD with UltraViolet from Universal Pictures Home Entertainment. 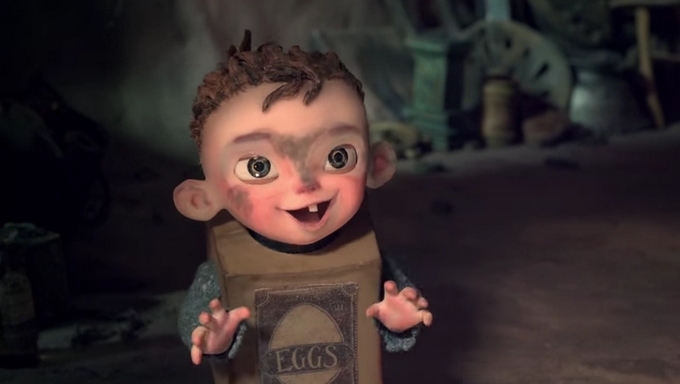 Quirky, mischievous and good-hearted, the Boxtrolls are unique creatures who have lovingly raised a human boy named Eggs in a fantastical charming cavern below the bustling streets of Cheesebridge. But when the evil Archibald Snatcher schemes to capture Eggs’ family, it’s up to Eggs and his feisty new friend Winnie to save the Boxtrolls!

Wearing boxes like turtles wear their shells, the Boxtrolls are kindhearted tinkerers who have used their imagination to build a home and community beneath the cobblestoned streets of the town of Cheesebridge. They are always making unique and creative costumes, using their imagination. Among the Boxtrolls friends – named after what was originally in the boxes they wear – are Fish, Shoe, and an 11-year-old boy named Eggs who thinks he’s a Boxtroll.

“The Boxtrolls” is the latest work of the Oregon-based animation studio LAIKA, who also brought us “Coraline” and “ParaNorman.” If you enjoyed the fun eccentricity of those movies, you will likely enjoy The Boxtrolls as well which strongly reminded me of Roald Dahl.

Part of its charm is that was painstakingly filmed in stop-motion and all the effort required by that particular style of animation really paid off.   The details, especially considering it is stop-motion claymation is incredible.  The Boxtrolls cave in particular is quite apparently steampunk inspired and really quite creative. 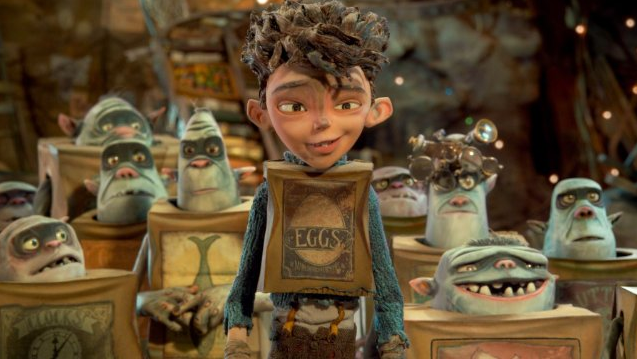 Of course the movie does go beyond the visuals into a weird and wonderful world that children and adults will enjoy alike thanks to the humour that can be found throughout the movie.

It just wouldn’t be a family movie without a lesson to learn and The Boxtrolls teaches us all about the importance of being inclusive and understanding of others as well as about the dangers of fear-mongering. 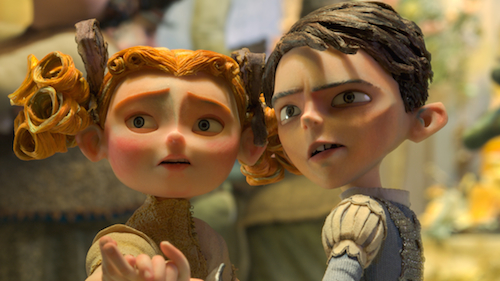 Winnie, an angelic looking little girl complete with ringlets really epitomizes the perversity that reminded me the most of Roald Dahl in this movie.  Despite her outward appearance she is a feisty little girl who is obsessed with all the gruesome details of how The Boxtrolls might go about eating children.

The Blu-ray™ Combo Pack and Blu-ray™ 3D Combo Pack include a Blu-ray™, DVD and Digital HD with UltraViolet™.

The tremendously talented cast members of The Boxtrolls discuss what it’s like to voice an animated puppet, what each actor brought to his/her role, whether their personalities were similar to their characters, and more.

The directors, producers, and creative supervisor of character fabrication Georgina Hayns share the challenges of crafting characters who are inside a box.

The directors and producers are joined by Brian McLean, director of Rapid Prototyping, to discuss how the animation studio LAIKA creates the faces for their puppets. The big story here – literally! – is how Snatcher’s face changes shape due to his cheese allergy.

Discover how LAIKA combined traditional stop-motion animation with visual effects in order to create the beautiful ballroom dance sequence – and how costume designer Deborah Cook met the challenge of creating costumes that could flow during a dance scene.

Standing 5 feet tall and weighing over 75 pounds, the Mecha-Drill is the largest stop motion puppet/prop ever created by LAIKA. Follow its creation from design to completion.

No doubt The Boxtrolls is one of the best animated films I have seen in awhile and likely for awhile to come, this one is definitely worth picking up!

I wasn't keen on this at first but after hearing it was nominated for an Oscar, I thought we might check it out after all.

Thank you for giving us the preview of 'Boxtrolls.' I think children would love this show as will most of their parents.

I would love to be able to watch this with the grandkids.

Looks like a movie that my nieces & nephews would enjoy! Mind you I probably would like it too...lol!