To preface my experience I need to detail what occured prior to my arriving.  I haven’t drove my car for the last week or two.  I’m pretty house bound with the new baby thanks to the cold weather.  I asked my husband to start it up and make sure it was running a few hours before he had to go to work on the night shift.  The car started fine, however my two back tires were about 4 inches deep in ice.  My car was not moving.  He tried digging out the tires and even tried the car mat trick.  At this point he had to go to work.

Meanwhile, I was trying to control my 2 year old and keep my newborn happy while simultaneously trying to straighten my hair and get ready to go.  Of course this doesn’t work well and at some point Keira decided it would be fun to bathe one of her dolls in the wipe solution.  Which ended up all over the floor.  Suffice to say that by the time my mom and sister arrived to watch the the two of them I was a little frazzled.  I ended up borrowing my sisters car and drove into Burlington for the event.

When I arrived at the Burlington Performing Arts Centre I was excited to see all the great food.  I got out my Canon EOS Rebel SL1 and got ready to take some drool worthy pictures.  It wouldn’t turn on.  This was around the time I realized that the battery was still in the charger where I had put it prior to the insanity starting.  Cue having to use my phones camera.  So I apologize for the photos, I can’t even begin to express just how disappointed I feel over this!

Anyway, back to the food! I’m just going to highlight a few of my favourites from the evening. 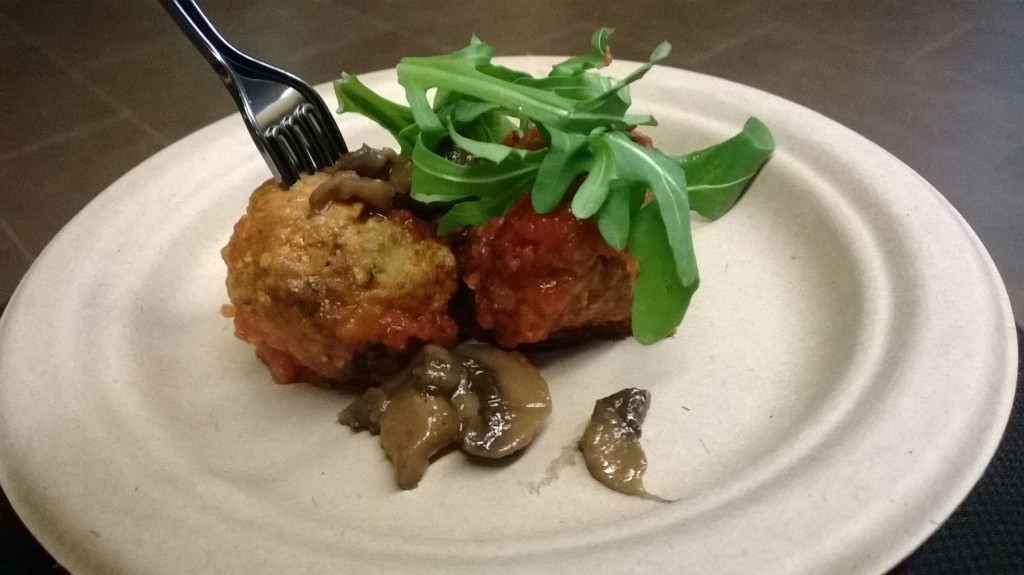 This was my first stop after quickly looking around.  I tend to be extremely shy and can get a little anxious in new situations so I wanted to start with something I knew would be both satisfying and comforting.  I hit the jackpot with this choice, they were moist and full of flavour! 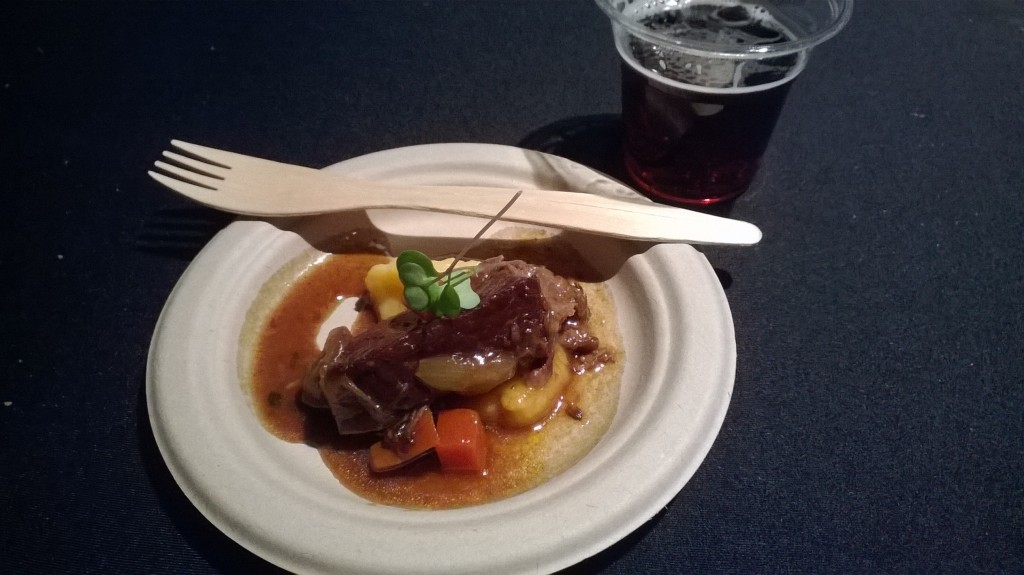 I am not the biggest fan of turnip but this puree had me wanting to go back for more.  It was smooth and creamy without that bitter flavour I find turnip has.  The ribs of course were quite delicious too.  Overall this was just so well put together I look forward to trying out their prix fixe menu!

This little treat was made with an icewine marshmallow, chocolate ganache and quinoa graham cracker.  I would happily go camping every day if this was the sort of food that got served!  Between the crunch of the cracker, the silky smooth ganache and the sweet marshmallow lightly toasted on top with the icewine flavourings, I was pretty certain I was in heaven. 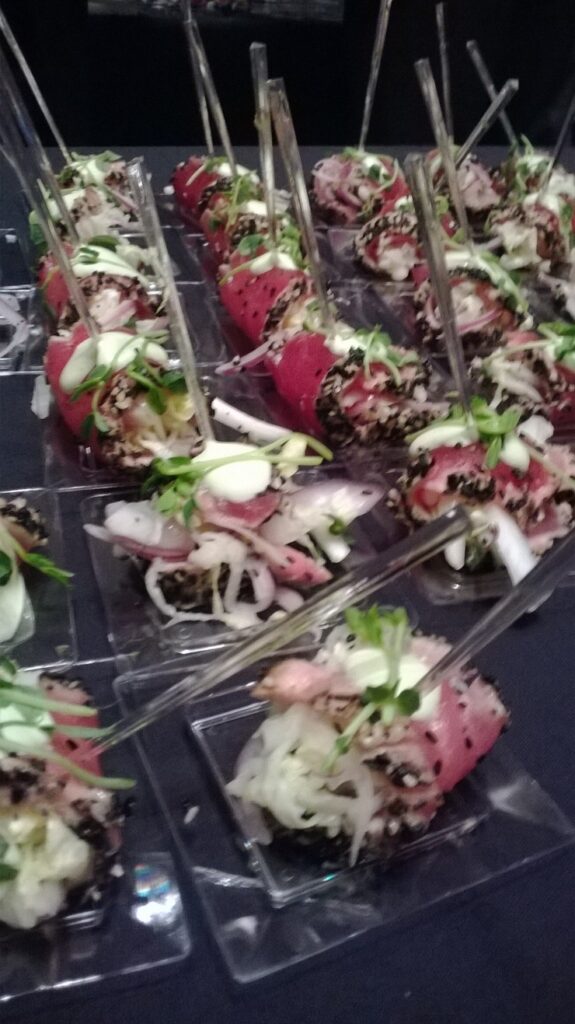 These canapes looked so amazing and the seared tuna was really fresh and soft.  I honestly felt like I was on Iron Chef as a judge eating this.  It just looked and tasted that good. 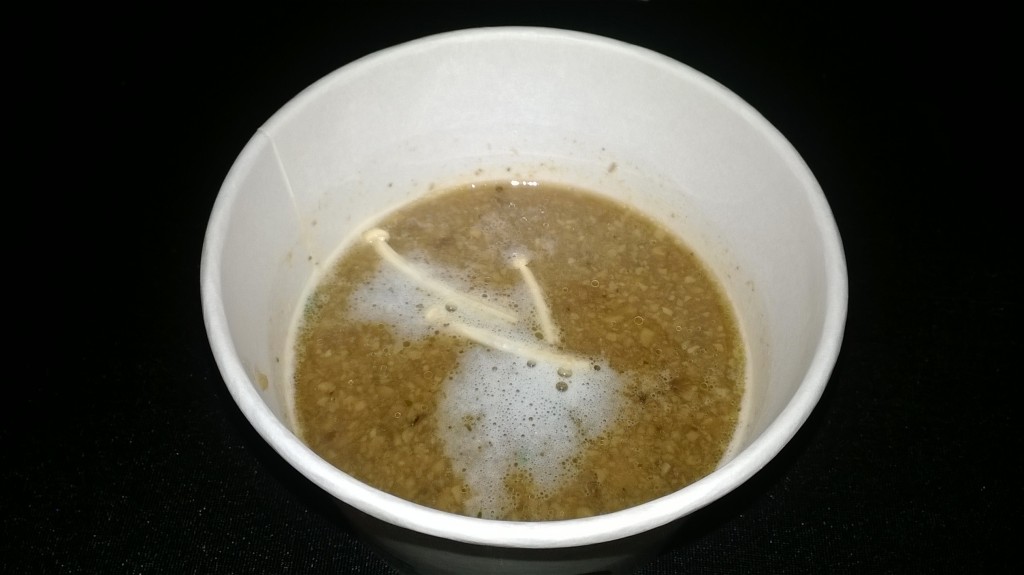 This Wild Mushroom Soup was described as a truffle scented soup with parmesan “foam” and garlic biscotti.  I loved the complex flavours of this soup.  It was broth based but surprisingly creamy in texture with a lightly spicy flavour.  This soup really hit the spot and I was fascinated by the foam aspect. 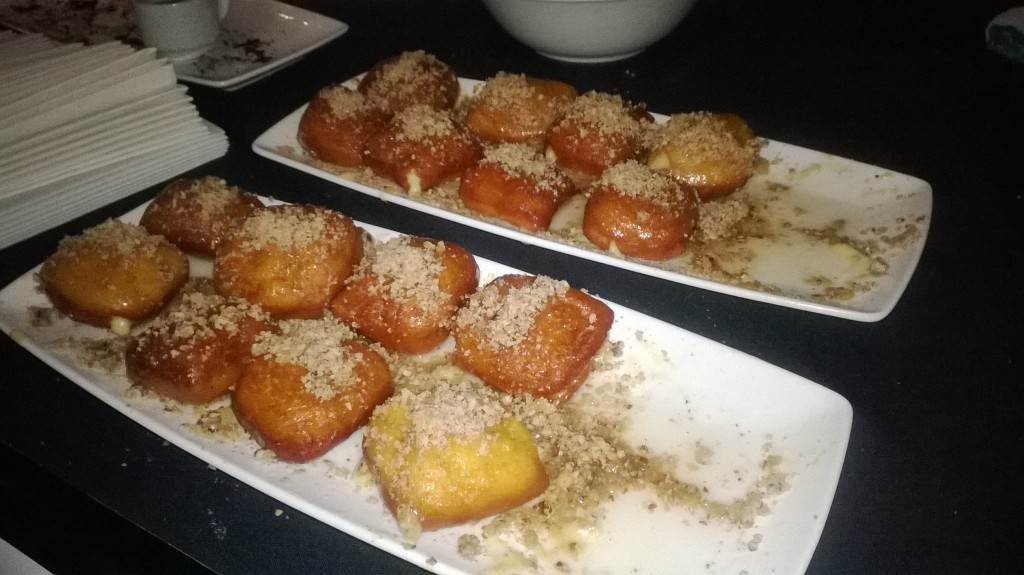 This house made sweet potato donut with Ontario maple cream and pralines was served with an espresso brewed from in house roasted Cuban green coffee beans.  I was really impressed with this pairing and not even just because of the flavour but also because of the obvious love for food from the Queens Head Pub team.   There was a lot of thought put into this dish and it really showed.  I couldn’t help myself but start tasting right away and only remembered part way through to take a picture.  The donut was surprisingly light with just the right amount of sweetness and the satisfying bitter end of the espresso shot went perfectly together. 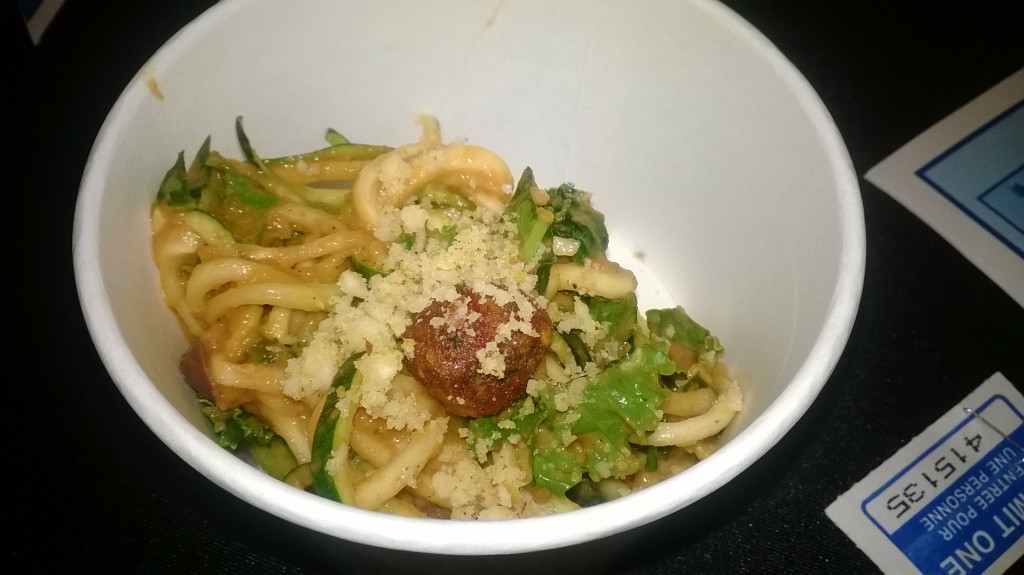 “Spiralized” zucchini tossed in a sundried tomato marinara sauce garnished with tomatoes, Kalamata olives and a cashew meatball, sprinkled with a brazil nut parmesan.  I was really impressed by the amount of imagination that went into the dish and surprised by just how satisfying and full of flavour this dish was.

Also present was Cameron’s Brewing Co. with their award winning craft beers.  I sampled their Auburn Ale as well as their Rye Pale Ale.  I’m not a beer drinker at all but I have to say that I really loved the Auburn Ale.  I could actually see myself buying a case to enjoy ice cold on a hot summers day which is saying a lot coming from me.  I don’t know how to describe the flavour but it is a darker beer with what I suppose is best described as a smooth and rich deep flavour.  The Pale Ale was also good but I don’t do well with pale beers, I suspect though that beer drinkers would really love it.

I finished the night off with an amazing cup of fair-trade coffee from Lakehouse Coffee House.  I chose to try the Reunion Island French roast and it was brewed to absolute perfection.  A perfect end to a perfect evening.

If you want to experience all the great tastes of Burlington be sure to visit A Taste of Burlington for all restaurants, prix fixe menus and pricing.

It all looks delicious.

I gotta say, despite forgetting the battery the pictures turned out great! This is one of those events you just don't eat all day waiting to attend ....

Oh my goodness...this is my kind of event! I wouldn't be able to stop :)

So happy you got to go even with all the mishaps. :) P.S. I often forget to put my SD card inside my camera... duh!!

Everything looks sooooooo yummy! What I would do to try the Tuna Canapes, they look delicious! I really need to check out A Taste of Burlington! Thanks for sharing.