I’ve been in love with my Samsung Series 9 Ultrabook to the point where I don’t look at my other laptops or desktop anymore.  The one thing I don’t like about it is lugging it around when I go visit my parents.  I mean it is light and so very thin and it is definitely easily portable, but the problem for me is that I have it plugged in constantly to an outlet behind my couch.  (Yeah, my couch is my office space!)  It’s just a pain to have to move the couch to unplug it when I want to take it somewhere.

When Staples offered me a Samsung Chromebook  (XE303C12-A01CA) to check out I was thrilled for the opportunity for another device from the same brand I already loved.  Bonus points for how easy it is to throw in my purse and carry along with me on the road to get work done while out and about.

The Samsung Chromebook is best described as a laptop-tablet hybrid and retails for only $269.96 which makes it a really affordable and far more productive alternative to a tablet.  If you are looking for a device to run apps on, browse the internet and create cloud-based content then this is the perfect device for you. 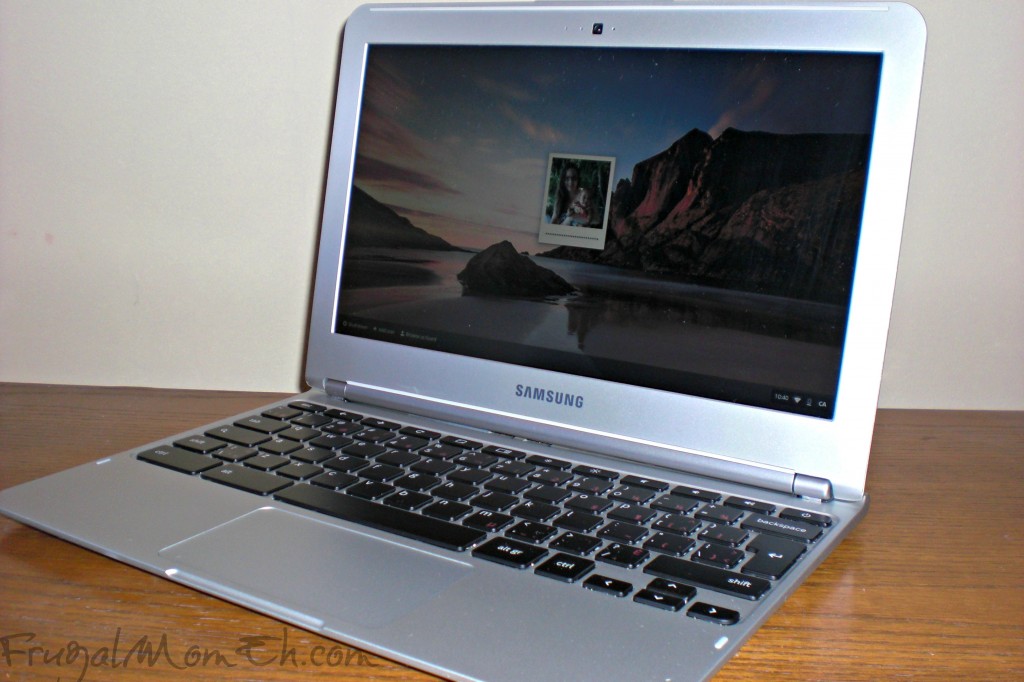 On the surface it appears to just be a small laptop, but it is not.  It comes equipped with a mobile processor and a relatively small flash drive, just like a tablet would.  It also runs the browser based Google Chrome Operating system rather than one of the typical platforms seen on laptops and desktops (I.E. Mac OS, Windows, or Linux).  It functions much closer to a tablet because of this, but affords all the convenience of a laptop thanks to the integrated keyboard.

The XE303C12-A01CA has a 1.7 GHz Samsung Exynos 5 dual (or 5250)  processor which is the same processor found in the Google Nexus 10 tablet. Also, just like the Nexus 10, this Chromebook also sports 2GB of memory and 16GB of internal storage.  The differences?  The Chromebook is larger, has a keyboard and retails for $139 less than the Nexus 10.  Chromebook users also get 100GB of free Cloud Drive storage for two years.

The keyboard is a full-sized QWERTY keyboard, but is has been optimized for use with Chrome.  There is a dedicated search key as well as a row of web-enabled keys.  The  keys themselves are chiclet-style and fairly comfortable to use, although just like any keyboard, it took me some use before it felt comfortable to type on.

The Search key functions much like the traditional windows key as, when pressed, it brings up a display of all the apps installed.

The touchpad is a large single button with some multi-touch functionality.  This is one feature I am not a huge fan of compared to the functionality of the touchpad on my Series 9.  It does require some adjustment from how you would intuitively use the touchpad on a lot of laptops.  Right-clicking is enabled by tapping the touchpad with two fingers rather than simply click in the lower right hand corner.  It does not support some (what I consider to be) key functions such as pinch-to-zoom.

Get stuff done with Google and the web

The Chromebook comes with several built-in apps including the Chrome web browser, Gmail, YouTube, Docs (word processor), Sheets (spreadsheet application), Slides (slide presentation application), Hangouts and more.  It is easy to find and download additional apps, both paid and free from the Chrome Web Store.
Chromebooks require almost no setup, and what little there is to do can be done in minutes by even the least tech-savvy person. Since it features built-in security you’re protected against viruses and malware without having to worry about researching and installing protection.
While the Chromebook may not suit the needs of everyone, it is certainly worth looking at if you are in the market for something more functional than a tablet without having to go up to a traditional laptop.  It is a less expensive and far more productive alternative to the Nexus 10 which is technologically similar.  Although you do not get a touchscreen, you do get a fully functional keyboard, extra cloud storage, and a fully functional web browser which, unlike the mobile version of the chrome browser, does support flash.

You can purchase the Samsung Chromebook online through Staples or in-store for only $269.96.

Does the Samsung Chromebook Sound like it suit your Needs?

Disclosure:  I was provided with the above mentioned product by Staples in order to facilitate this review.  All thoughts and opinions are honest and remain my own.

What a great design with wonderful features! I could really use this!

no way, that is a really nice price! it looks amazing as well!

Thinking this is a must try! Sounds like it's what I'm looking for

That's a great price for a great product. I'm trying my best to be able to get one for an 8 year old with vision problems. He loves to read and the zoom feature is what I need... Great review by the way!