When I was pregnant with Keira I suffered from horrible morning sickness until part way through my second trimester.  I ended up losing about 10 lbs during that period because all I could keep down was water and a few crackers a day.   I was taking a prenatal vitamin but being roughly the size of a horse pill they were so hard to keep down. It was important that I at least get those down if nothing else so I persevered with them.  Little did I know that I could have been taking Premama the entire time and wouldn’t have suffered so much.
Premama is a prenatal vitamin drink that comes in the form of a flavourless powdered drink mix and contains all the goodies normally packed into a giant prenatal vitamin pill.  Each packet of Premama can be broken down into two smaller packets which is great if you want to take it as two servings throughout the day. This would be the best option for those battling morning sickness.

Premama recommends you mix the packets with your favourite drink (no hot drinks or soda though).  I tried with water first and you can see the result below.  It looks gritty but I didn’t notice a texture difference at all which is good.  Textures can sometimes cause a frantic race to the toilet.  I also found it really had no flavour, I just tasted water.  Also great.  However I found it had an odour that reminded me of the smell of spring rain when the worms come out that I’m sure would have made me gag during my morning sickness.  That said, when I mixed it into an actual drink I didn’t notice the odour at all so the key seems to be not to mix with water.  Duly noted. 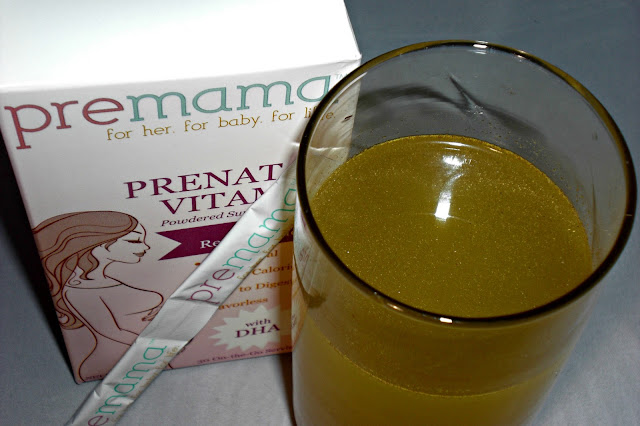 Buy it:  Premama is available directly through the company online or check out one of their retailers.

I love that it has ginger for nausea relief. I prefer liquid vitamin supplements because there is better absorption.

i love that it helps with morning sickness

That it helps with the nausea.

I love that its tasteless. I able able to drink (decaf) coffee in the AM, but cant eat/take pills. This is perfect.

I love that it has no taste and it isnt a pill.. Im the sort of person that can not swallow pills for the life of me.. This would be perfect for me