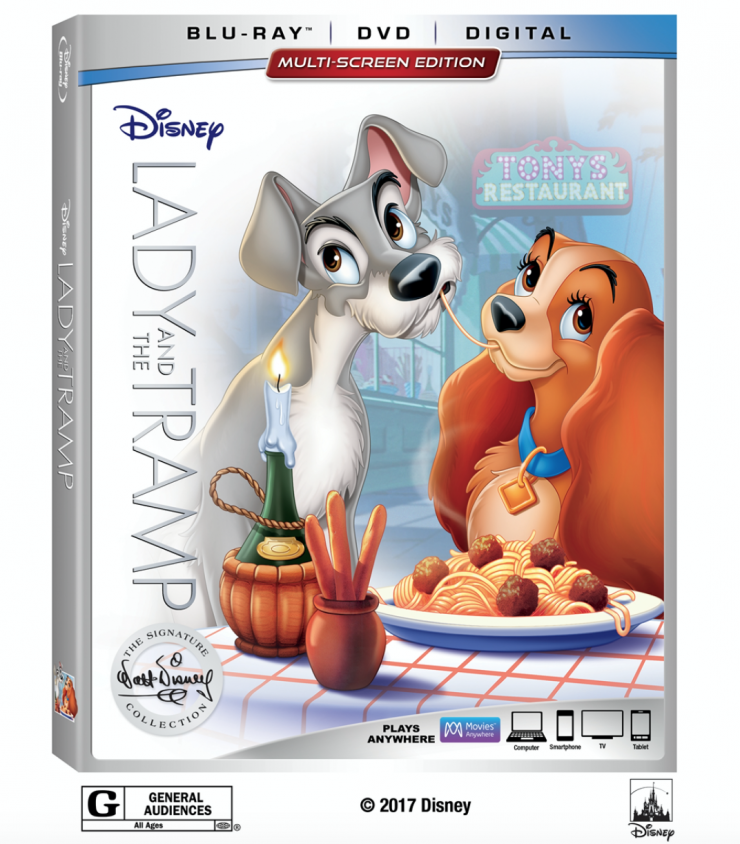 This February, Disney’s cherished animated classic, “Lady and the Tramp,” joins the highly celebrated Walt Disney Signature Collection. Every member of the family will treasure this timeless tale—loaded with three versions of the film, classic bonus material and three all-new features available on Blu-ray and Digital now.

As one of the greatest love stories ever told, “Lady and the Tramp” is sure to melt the hearts of generations with its beloved characters, brilliant animation, memorable music and sweet sentiment. The animated treasure tells the story of Lady, a lovingly pampered cocker spaniel, and Tramp, a freewheeling mutt with a heart of gold. Through the Signature Collection edition, viewers can relive the pair’s thrilling adventures, sing along with the film’s unforgettable songs like “Bella Notte,” and swoon over one of the most memorable movie moments of all time—the iconic scene in which Lady and Tramp share a plate of spaghetti and an accidental kiss.

“Lady and the Tramp” is the sixth title to join the Walt Disney Signature Collection, which includes groundbreaking films created or inspired by the imagination and legacy of Walt Disney, featuring timeless stories and characters that have touched generations. The film takes its place alongside “Snow White and the Seven Dwarfs,” “Beauty and the Beast,” “Pinocchio,” “Bambi” and “The Lion King.”

Classic Bonus Features on Digital Only*

Lady and the Tramp was a childhood favourite film of mine and I was excited to share this Disney classic with my girls.  It was heartwarming to watch the girls fall in love with this classic movie amd despite a few dated scenes, I really enjoyed watching it with them – twice in a row even.

There are a lot of fun extras included with this edition that I enjoyed watching on my own including deleted scenes, Walt’s stpry meetings etc.. The irls on the other hand absolutely love the songs included in the bonus features.

This edition is well worth picking up if you don’t already own a copy of this classic movie.