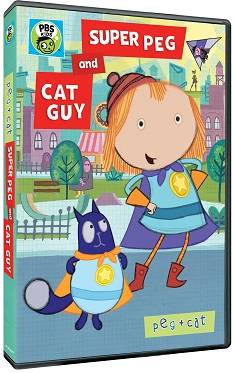 PBS Distribution recently released four stories from PBS KIDS’ popular PEG + CAT series on the new DVD “PEG + CAT: SUPER PEG AND CAT GUY.”  In this action-packed DVD, Super Peg and Cat Guy defend the bustling city of Mathtropolis from three meddlesome foes – Arch Villain, Triangulo, and Flat Woman. In order to save the day, this dynamic duo will have to use their peculiar super powers, Peg’s sphere of focus, and Cat’s ability to do nine clumsy things before scraping his knees, as well as their problem-solving skills to prevent these evil doers from creating havoc in the city. As Super Peg and Cat Guy solve the city’s problems, they learn about shapes and do lots of counting. Join these two friends as they put their minds together to fight these dastardly villains and discover that using math to save the day is TOTALLY AWESOME!

“SUPER PEG AND CAT GUY” is available on DVD now.  The DVD run time is approximately 50 minutes, and its SRP is $6.99. The stories included on this DVD are listed below.

When the Arch Villain wreaks havoc on the city of Mathtropolis by turning everything into arches, Super Peg and Cat Guy come to the rescue.

“The Straight and Narrow Problem”

Super Peg and Cat Guy trail the Arch Villain, who has given up his arch ways and gone on a rampage with straight and narrow shapes instead.

Super Peg and Cat Guy face their greatest challenge yet: Triangulo and Flat Woman have teamed up to triangulate and flatten the entire town!

Peg and Cat must find a way to pass three super powerful race cars in their little race car made out of junk.

My girls, 2 and 4, both love watching Peg + Cat. I, on the other hand, constantly have the theme song running through my head.  It’s a serious problem.  Peg + Cat! brdoo dodododoodoodoo!  Not to mention the Problem Solved song. I mean these are songs I find myself humming even on the rare occasion where my kids go a few weeks without watching an episode. This is on the same level of catchy-ness as The song that never ends. Remember that?

Anyway, the kids love the show and this DVD went over really well with them. They especially loved the “The Arch Villain Problem” episode with Super Peg and Cat Guy. My 4 year old is really into Super Heroes right now so she thought it was really thrilling to see Peg be a super hero.

What a cute DVD my granddaughter would be sure to enjoy it,she loves Peg + Cat.

First I have heard of this but I am thinking my niece would enjoy it.

Peg + Cat is a big favourite of my niece. I am sure that she would enjoy this DVD.