What do Bert & Ernie, Forrest & Jenny and Thelma & Louise have in common? They go together like a bowl of cereal and milk of course! For the 78 per cent of Canadians who eat cereal for breakfast, cereal and milk are practically inseparable. In fact, according to the Kellogg’s Cereal & Milk Survey, 85 per cent of cereal lovers say they can’t have one without the other.

Watch Kellogg’s latest commercial to see just how perfect a pair they really are. (Just don’t blame me if you find yourself singing the song later!)


Although it’s clear that Cereal & Milk are best friends in a bowl, the survey revealed that across Canada, star-crossed cereal lovers actually disagree on the ideal cereal to milk ratio. Forty per cent (40%) say that one third of the bowl should be filled with milk. Thirty per cent (30%) maintain that you should add milk only until your cereal begins to float. And a small but mighty six per cent (6%) of cereal experts are adamant that there should be more milk than cereal in the bowl.

Canadian cereal lovers were more definitive about whether they like their cereal crunchy or soggy. With 83 per cent of respondents saying so, crunchy cereal is what Canadians crave. Still, that means nearly one-out-of-five (17%) favour soggy cereal. Yes, you read that correctly: soggy cereal. 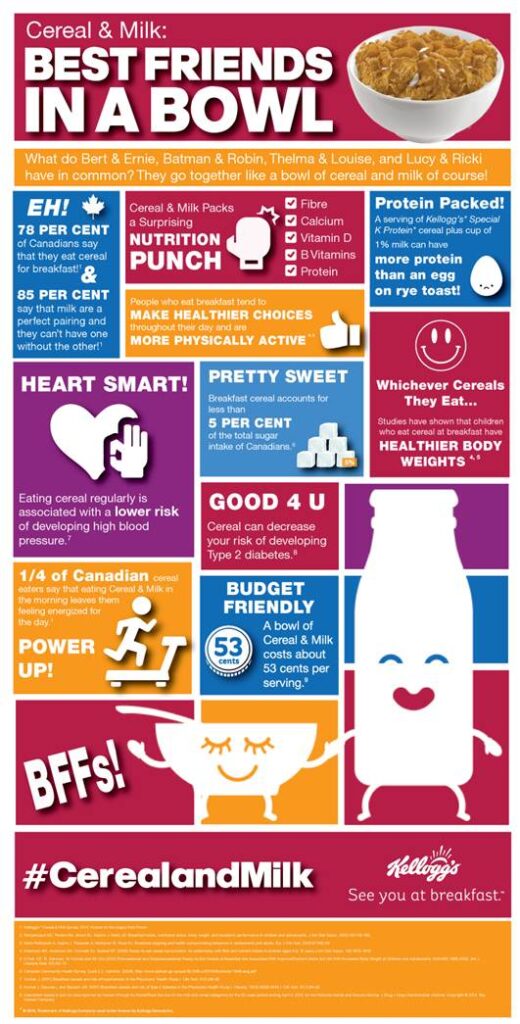 No matter how you enjoy your simple bowl of Kellogg’s Cereal & Milk for breakfast though, one thing is certain — it’s a great way to start your day.

When you know the simple facts, it’s clear that it offers a big nutrition punch. For example, did you know that studies have shown children who eat cereal at breakfast have a healthier body weight. This fact holds true regardless of the type of cereals children eat.  Check out the Kellogg’s Cereal & Milk website to find out more interesting facts that demonstrate just how good a simple bowl of Cereal & Milk is!

Kellogg’s wants you to tweet and/or instagram using the hashtag #CerealAndMilk and link to the Cereal and Milk Infographic.   Share how you prefer your cereal and milk! 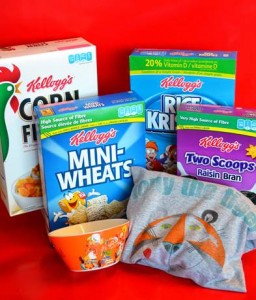 One Canadian Frugal Mom Eh reader will win a Cereal & Milk Prize Pack!  The prize pack is valued at approximately $50, and includes a vintage Kellogg’s ceramic cereal bowl, vintage Kellogg’s t-shirt, and an assortment of Kellogg’s cereals – all to celebrate Cereal & Milk! See below for an example of the prize pack – prize may not be exactly as shown. Giveaway ends on August 3rd at 11:59 pm EST.  See Giveaway Tools form for full T&C.

Frosted Flakes for sure.