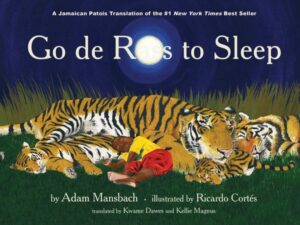 The best-selling Go the F*** to Sleep has been translated into over thirty languages worldwide. Now it is finally translated for Jamaican and other Caribbean parents of the world.

Go de Rass to Sleep is a bedtime book for parents who live in the real world, where a few snoozing kitties and cutesy rhymes don’t always send a toddler sailing blissfully off to dreamland. Profane, affectionate, and radically honest, California Book Award–winning author Adam Mansbach’s verses perfectly capture the familiar—and unspoken—tribulations of putting your little angel down for the night. In the process, they open up a conversation about parenting, granting us permission to admit our frustrations, and laugh at their absurdity.

With illustrations by Ricardo Cortés, Go de Rass to Sleep is beautiful, subversive, and pants-wettingly funny—a book for parents new, old, and expectant. You probably should not read it to your children.

As you may (or not) know, my husband is Jamaican.  I mean… really Jamaican.  To the point where I get to play translator a lot of the time between his constant use of patois and his thick Jamaican accent.

When I saw the e-mail in my in-box announcing this title I just knew we had to check it out.  Which says a lot because my e-mail is inundated daily with book review requests.

I had Anthony sit down and read the book to me just because I figured it would be at least twice as funny to hear it out loud vs.  in my head.  We were both cracking up, especially since Keira has been difficult to put down to sleep since we moved.

I didn’t have any issues understanding or reading the story, although to be fair I also have no issues understanding dance-hall lyrics, conversations among Jamaicans, Jamaican movies etc.. Which, by the way, is hilarious because nobody ever suspects that the little white girl knows Patois.  I think most English speakers could muddle their way through the book though.  Hey, there is always google right?

Anthony was a little bit picky over some of the spelling, me vs mi and de vs di, fe vs fi, etc..  but I think that is probably just preference more than anything.

“Me know seh yuh not tirsty a rass.  Yuh too lie.  Lie de rass down, boonoonoonoos, an sleep.”

I’m fairly certain I’ve heard Anthony say similar to Keira most nights which is what makes it so funny.  Her favourite thing to do right now is refuse milk during and after dinner and once in bed she will ask for “Muk” which seems to be a really effective way to get him going.

I’m really impressed with the translation, after reading over it myself again.  It really captures the yardie style in a fun way and is sure to be a hit with Jamaican (and other Caribbean) families.

I love that you enjoyed it so much! I must pick up the English version!

this is a hilarious book

This sounds like a book my son would love.