Whether you love Disney princesses, superheroes or Jedis and droids, DK’s Visual Guides, Essential Guides and Character Encyclopedias are the perfect way to bring the excitement of your favourite movies home. Full-page profiles of characters, behind-the-scenes information and page after page of fantastic amazing photographs and images from the films make each of these books a must-have for any film fan!

For a limited time only the books featured in the Movie Maniacs Boutique are 30% off!

I was able to check out the Disney Princess: The Essential Guide and the Disney Pixar Character Encyclopedia. Both titles I knew Keira would be crazy for. 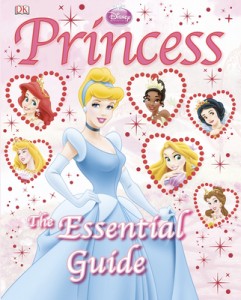 Now with a fresh, new look, and including Disney’s most recent princesses: Tiana and Rapunzel!

With Disney Princess: The Essential Guide, fans will be able to relive the excitement and charm of their favorite heroines.

Chronicling the lives and friends of all the Disney princesses — from Snow White, Cinderella and Belle, to the two newest, Tiana from The Princess and the Frog and Rapunzel from Tangled — this essential guide provides insider knowledge on the princesses and the magical worlds they inhabit. Young readers will delight in the new design, as the beautiful princesses dance off the page — right into happily ever after!

Ok, so I love Disney Princesses.  I grew up with Snow White, Ariel, Belle, Cinderella, Jasmine and Pocahontas.  I definitely got this title as much for myself as for Keira and (eventually) Ava.

So first… Sparkles!  Keira and I both kind of oohed and awed at the sparkles on the cover.  Yes.  I do like shiny things.

The Book itself is full of gorgeous illustrations and captures straight from the movies themselves. It has been setup as a sort of memory book with sections for each princess detailing their “lives”.

Definitely recommended for the little (and big!) princesses in your lives.  This is a fun one for Disney fans! 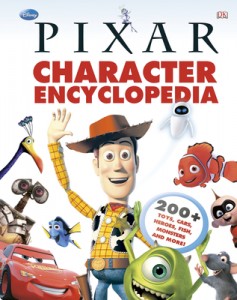 Meet Sully, Nemo, Woody, and all of your other favorite Disney•Pixar characters in DK’s Disney•Pixar Character Encyclopedia!

Each page gives you instant access to everything there is to know about 200 Disney Pixar characters from classic Disney•Pixar films like Finding Nemo, Cars, and Monsters Inc. to some of the lesser known like A Bug’s Life and Ratatouille. And don’t forget about the endearing characters from the newest addition to the Disney•Pixar collection, Brave.

With tons of fun facts, images, and movie stills along with information on each character’s role in the movies, the Disney•Pixar Character Encyclopedia will be the go-to guide for young Disney•Pixar fans everywhere.

This is a surprisingly detailed and thorough title covering characters from Pixar films from Toy Story to Brave and everything in between.

It is well organized and I love the colour coded and labelled page edges for each film which makes it easier to tell which characters belong to which movie at a glance.

It is brightly coloured and full of great illustrations and fun facts about each character.  I love that they look at even lesser known characters and don’t just focus on the Nemo’s of the Pixar world.

Disclosure: I received the above mentioned products in order to facilitate this review.  All thoughts and opinions are honest and my own.

What great referral books, if you are unsure about something in a movie refer or read all about it

My little cousin would adore Disney Princess: The Essential Guide

Amazing idea, get all the back scene info on the movies you love

That encyclopedia would be awesome to look through. Awesome coffee table book.