Make This the Best School Year Ever with DK’s Back to School Boutique!

Whether you are looking for answers to questions about science or math or simply looking to discover more about the animal kingdom or the natural world DK has you covered with a full range of reference books. Fully illustrated and expertly researched each of these specially priced titles (for a limited time only!) ensures that kids (and adults) will have something fun to share when there’s homework to be done!

We were sent Smithsonian Dinosaur! and Dinosaurs: a Visual Encyclopedia to check out.  I was kind of excited because I don’t know very much about Dinosaurs.  I mean I know the basics; I can point out a T-rex and a Triceratops but I wanted to know more!  Plus, how handy would these be for research projects once the girls are in school? 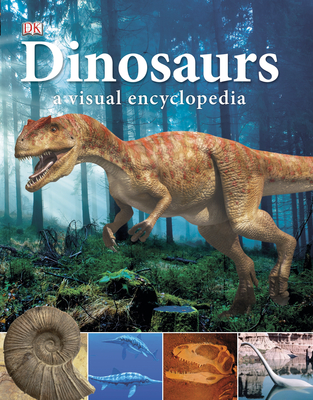 Dinosaurs: A Visual Encyclopedia will spark the curiosity of young readers, taking them to a time where Tyrannosaurus rex ruled the land, pterodactyls flew in the skies, and packs of velociraptors prowled the jungles. Filled with up-to-date discoveries about prehistoric life, this tome includes comprehensive material about biology, geography, history, and other scientific information from prehistoric times. Dinosaurs: A Visual Encyclopedia is not a catalog of facts, but a celebration of the wonders of the world from the beginnings of our planet’s existence.

This book is gorgeous to start.  It is a paperback with big glossy pages full of the beautiful photographs and illustrations that DK are so well known for.

The books is organized by time period and then by family and colour coded for each main section which makes it super easy to navigate just by flipping through it.

Dinosaurs actually covers far more than just dinosaurs which gives the reader a much more comprehensive look at pre-historic life.  Invertebrates, Early Vertebrates, Dinosaurs and Birds as well as mammals including primates and human ancestors are also covered.

Each Family features a “Family Fact File” including key features. I love that each dinosaur in the family features a more detailed summary including the phonetic pronunciation of their often long names, when they lived, where the fossils were found, habitat, length and diet plus a to-scale illustration compared to a man.

Each family also shows computer generated illustrations of the creatures as well as photos of fossils.

There is just so much information in this encyclopedia and it has been done so thoroughly that it is a definite must have. 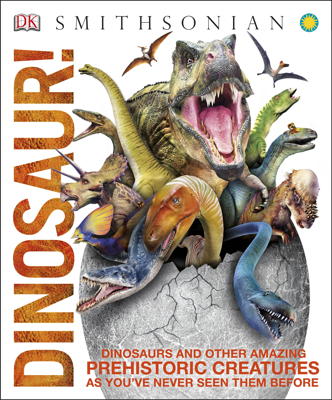 Created in conjunction with the Smithsonian Institution and packed with fun facts on fossils, amphibians, sea creatures, woolly mammoths, Neanderthals, insects and more, Dinosaur! will intrigue readers and provide an experience that will redefine natural history for kids.

The lost world of velociraptor, stegosaurus, allosaurus, and other prehistoric monsters come to life as never seen before in Dinosaur!

Packed with photorealistic computer generated images, detailed cross-sections and cutaways revealing the inner workings of dinosaurs, simple annotations, and clear concise definitions explaining each dinosaur and prehistoric beast at a glance — Dinosaur! revives the Triassic, Jurassic, and Cretaceous Eras and brings young readers into the action.

This title is hardcover with plenty of illustrations.  I was interested to see how it would compare to Dinosaurs, and what would really set it apart.

This book focuses only on the Mesozoic Era and part of the Cenozoic Era which basically means it covers only dinosaurs and the very first mammals aside from some brief coverage at the beginning of the book.

Dinosaur is again organized by time period but isn’t as thorough in the number of dinosaurs that are covered.  I like that there is a “slider” at the top of each page showing what time period you are in.  I am unsure of how the dinosaurs are organized within each time period though as it seems a bit random.

I like that the spreads are quite big and feature little pops of text that are easy to take in.  There are also quick facts listed including when they lived, their habitat, their length and diet as well as a to-scale illustration compared to a man.

There is also a lot of generalized information about dinosaurs throughout the book which is interesting.

Overall, this is a nice addition to a Dinosaur collection but if  you had to pick only one reference book… Dinosaurs: A Visual Encyclopedia would be my pick.

I would love to look at the dinosaur book myself

I love the DK catalogue! Such a great selection of educational and informative books.

DK publishes such amazing informational books, I and the grandkids love them