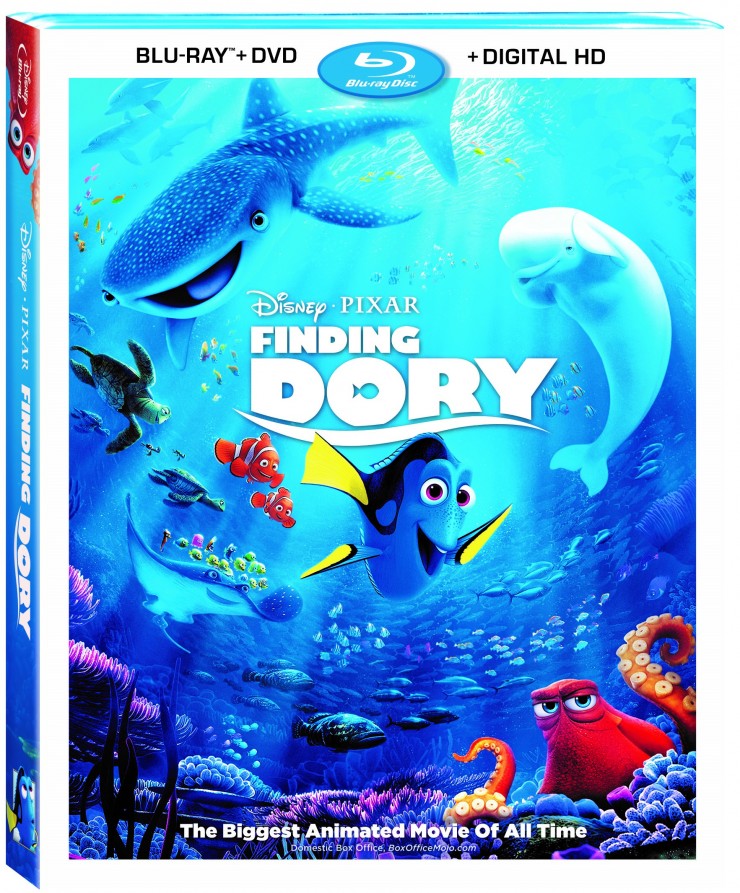 The summer blockbuster hit, Disney•Pixar’s Finding Dory, swam home just in time for the holidays. Viewers can watch Dory’s hilarious and heartwarming quest to find her family and continue the underwater adventure with hours of immersive bonus features.

The film’s playful and plentiful bonus offerings include “Piper,” the theatrical short film starring an irresistible sandpiper hatchling; an all-new mini short featuring interviews with Dory’s pals from the Marine Life Institute; a behind-the-scenes look at the most challenging character Pixar has ever created; never-before-seen deleted scenes, including a digital exclusive featuring the Tank Gang from “Finding Nemo” who make it their mission to get Marlin and Nemo to the Marine Life Institute; and much, much more.

Thirteen years after the original, audiences get a new chapter in the story of their favourite forgetful blue tang. As returning director Andrew Stanton describes, “I realized that I was worried about Dory. The idea of her short-term memory loss and how it affected her was unresolved. What if she got lost again?” His response is a touching tale of friendship and family that’s truly unforgettable … perhaps even for Dory.

Dive deep into the kelp to find out more about the making of the film with extensive extras featuring the creative talent of Pixar and the all-star cast! Bonus features include*:

From the Academy Award®–winning creators of Disney•Pixar’s “Finding Nemo” (Best Animated Feature, 2003) comes an epic undersea adventure filled with imagination, humor and heart. When Dory, the forgetful blue tang (Ellen DeGeneres), suddenly remembers she has a family who may be looking for her, she, Marlin (Albert Brooks) and Nemo (Hayden Rolence) take off on a life-changing quest to find them … with help from Hank, a cantankerous octopus; Bailey, a beluga whale who’s convinced his biological sonar skills are on the fritz; and Destiny, a nearsighted whale shark. Bring home the movie overflowing with unforgettable characters, dazzling animation and gallons of bonus extras.

It’s not often that I love a sequel as much as I love the original film. It was hard to imagine that my kids would enjoy Finding Dory as much as they enjoyed Finding Nemo. Well we watched it and we all unanimously agreed that it was a fabulous watch in its own right. It’s beautiful and vivid with a story that tugs on the heart strings but still manages to be fun. It’s a very entertaining movie and certainly worth picking up for watch with the family. Viewers with adopted children should probably beware though as it’s a story of young Dory losing her parents and (spoiler) finally being reunited with them.

This movie looks adorable. I still haven't seen it.

We missed this in the theaters so can't wait to watch it on DVD. It is on top of our daughter wishlist :)