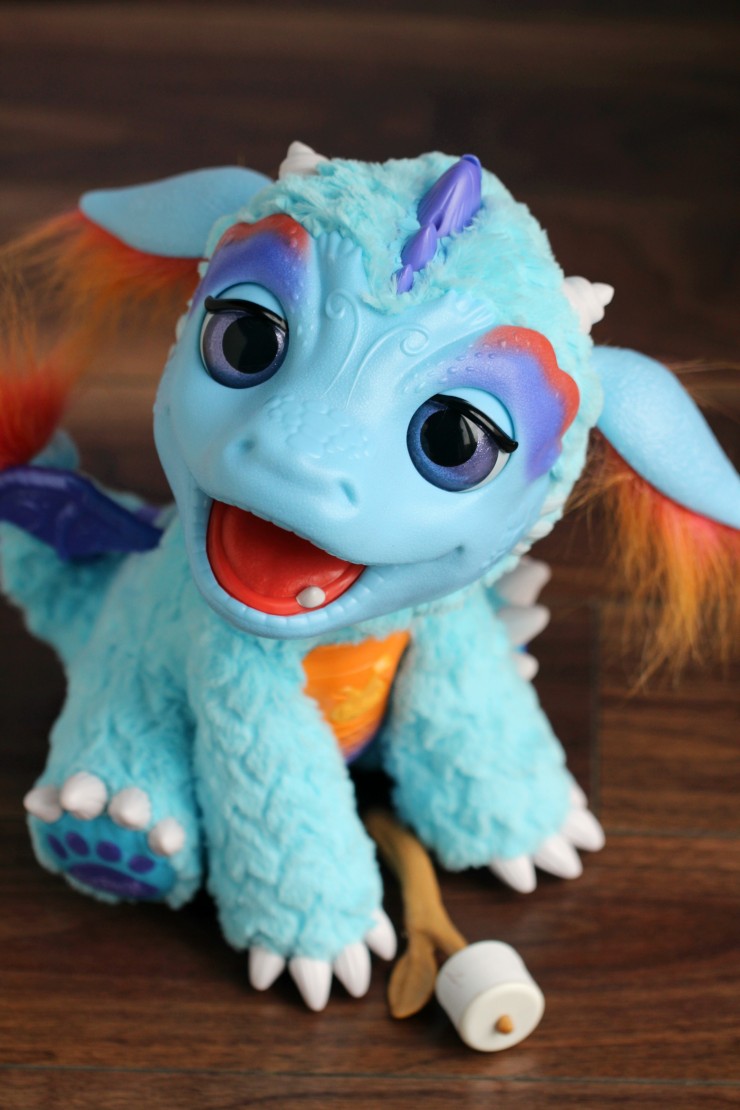 One of the top toy gifts for kids this year is FurReal Friends: Torch, My Blazin’ Dragon. Last year StarLily: My Magical Unicorn Pet was a top gift, and I do think she will be on many lists again this year.

The FurReal Friends line is always a huge hit with kids, especially with kids who may desire a pet of their own.  Like others in the line, Torch, My Blazin’ Dragon. is an engaging plush pet capable of so many things that is easy for any child to imagine themselves in a fantastical world full of Dragons. 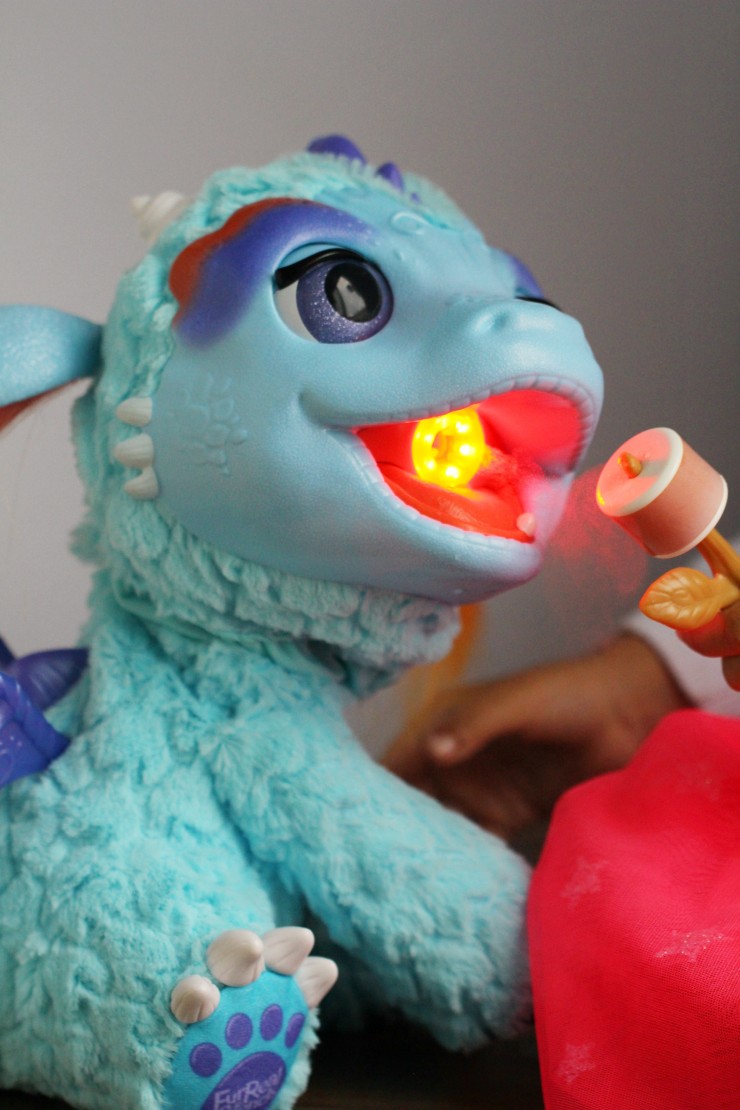 Blaze includes a colour-changing marshmallow treat on a stick. As he breathes “flame” onto the treat, it changes colour as he breathes onto it. Of course, he doesn’t really breathe flame, but instead a mist coloured by a red LED in his mouth. It is a fairly realistic effect for kids though, it had my girls concerned they were going to burn themselves at first until they realised that the mist was cool.

You need to fill Torch up with water using the “jewel” included. Simply touch his charm to have him breathe his red flame.

This is the feature my kids love the most about Torch. They can spend ages getting him to roast the marshmallow, dry it off and wait for it to return to white so that they can roast it all over again. I think the only thing my kids dislike is that it does take quite a while for the marshmallow to turn white again. 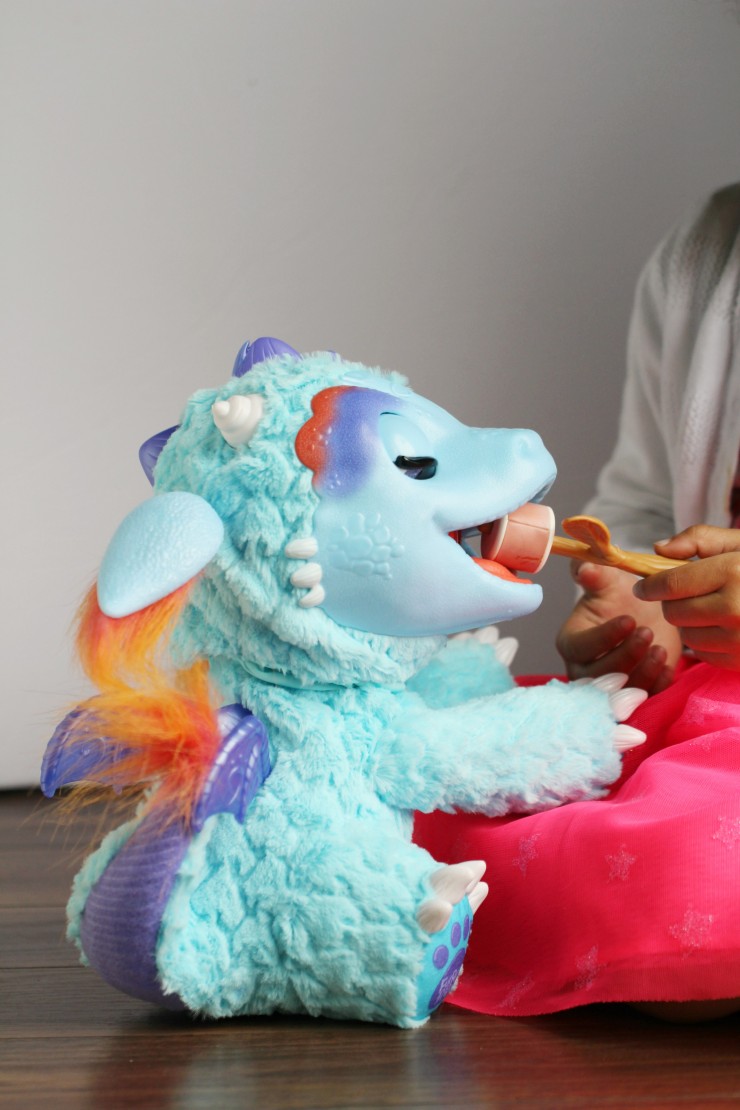 Once he has roasted his treat, you can place it in his mouth for him to eat, complete with chomping sounds.

Torch responds with 50-plus sound-and-motion combinations when you press his charm, pet his nose, or give him his treat. Some of the responses include breathing flame-colored mist, giggling, snorting, moving his head, and other sounds and movements. He even lets go a rude little burp every now and then!

Like Starlily, Torch does not walk, but his front legs are poseable so he can sit up or accept a great big hug. 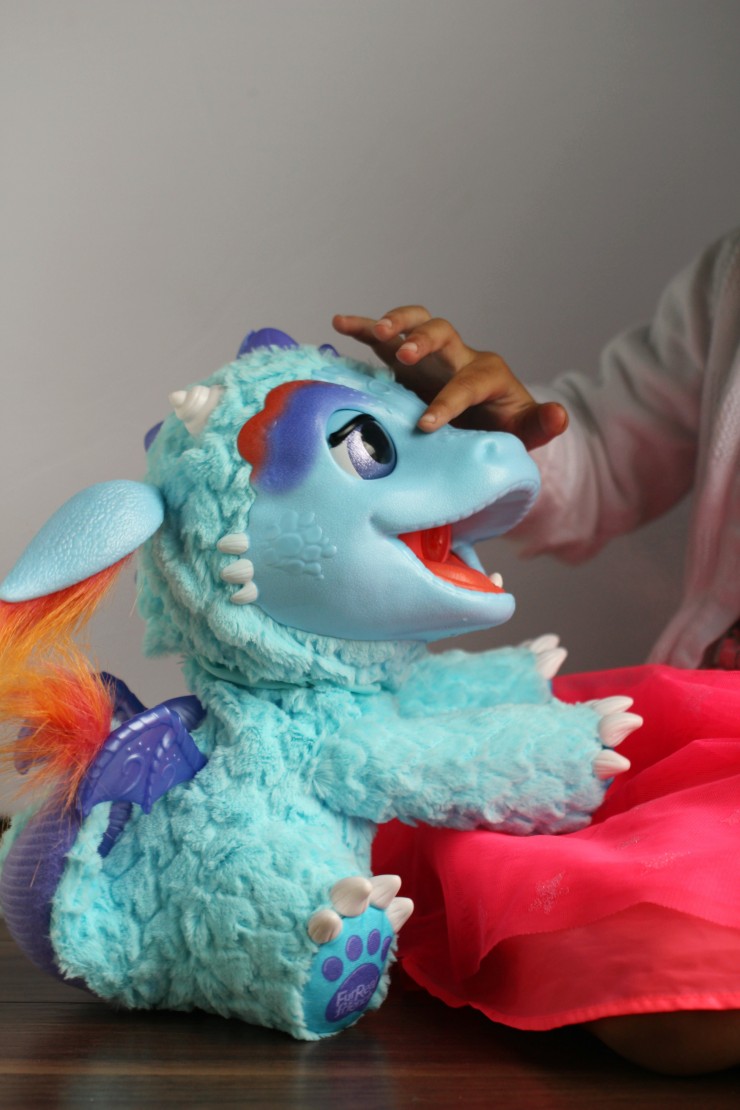 The sounds he make include infant-like sounds that are simply adorable right down to cute little snoring sounds right before shutting down into battery saving mode.

His Dragon roar is adorable too and sounds rather like a toddler playing at being a lion.

His ears move and wiggle, his eyes open and close and his head moves around in a fairly realistic manner. It is easy to see why my kids love playing with him so much, and I expect that they will be playing with him a year from now in the way that Starlily sees at least weekly play still.

Like Starlily, Torch does require 4 “C” batteries which are not included, so be sure to pick up some to avoid forcing your child to wait to play with him. (Trust me, they won’t want to wait!)

Mi girls have the dragon and he just started roaring like a big dragon, not those cute baby dragon roar, but more like a JP T-Rex roar. I was wondering if this is a normal sound ? Has anyone else heard it ?

OMG,the kids would love this guy!

Ohh he is soo cute! I think my nieces would really love one but so would I, lol. I am adding him to our gift list.

I have been eyeing this one up myself. I love how cute the dragon is. Such a great present. Maybe someone will get me one. LOL.

These are so cute! My little cousins would love it.