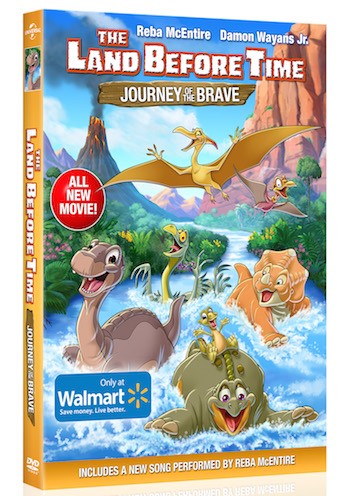 Five best friends set out on a courageous rescue packed with laughter, thrills and music in the all-new animated movie, The Land Before Time: Journey of the Brave coming to DVD and Digital HD on February 2, 2016, from Universal 1440 Entertainment, a production entity of Universal Pictures Home Entertainment. In this exciting and heartwarming adventure, young Apatosaurus Littlefoot and his four dinosaur pals, Cera, Ducky, Petrie and Spike, embark on an ambitious quest to find Littlefoot’s missing dad, making new friends and learning valuable life lessons along the way. New to the hugely popular franchise is the Queen of Country Music, Reba McEntire voicing one of two new characters, Etta. The Golden Globe and Grammy nominee also performs 1 of the 4 all new songs in the movie, “Look for the Light.” Voicing the second new character is none other than Critics’ Choice TV Award Nominee, Damon Wayans Jr. as Wild Arms.


I remember when the first Land Before Time movie came out.  We got it as a Christmas gift on BETA.  Yeah.  BETA. We didn’t know it then it, but that was the start of a Christmas/Boxing Day tradition. The next movie didn’t come out until a couple years later but after that a new movie was released yearly and we always received a joint gift of the latest movie for Christmas.
We would then spend boxing day sitting together in the living room as a family watching the latest movie.

It’s now been nearly a decade since the last instalment in the series and I’m excited to be able to introduce my girls to The Land Before Time!

I was pleased with the quality of animation and the storyline – and although some elements were somewhat familiar it just wouldn’t have been the same otherwise. This film works well as a standalone film so even if your children haven’t seen the previous 13 movies in the franchise they will still absolutely enjoy what this film has to offer. As with previous films, the film shares a message of friendship and hope that families will really enjoy.

The Land Before Time XIV: Journey of the Brave includes four all-new original songs including “Look for the Light” performed by Reba McEntire.

I totally forgot about The Land Before Time! Thanks for the reminder!

We just watched this on VHS last weekend |!

This sounds like a super fun movie for my grandchildren, I'm sure they'd love it :-)