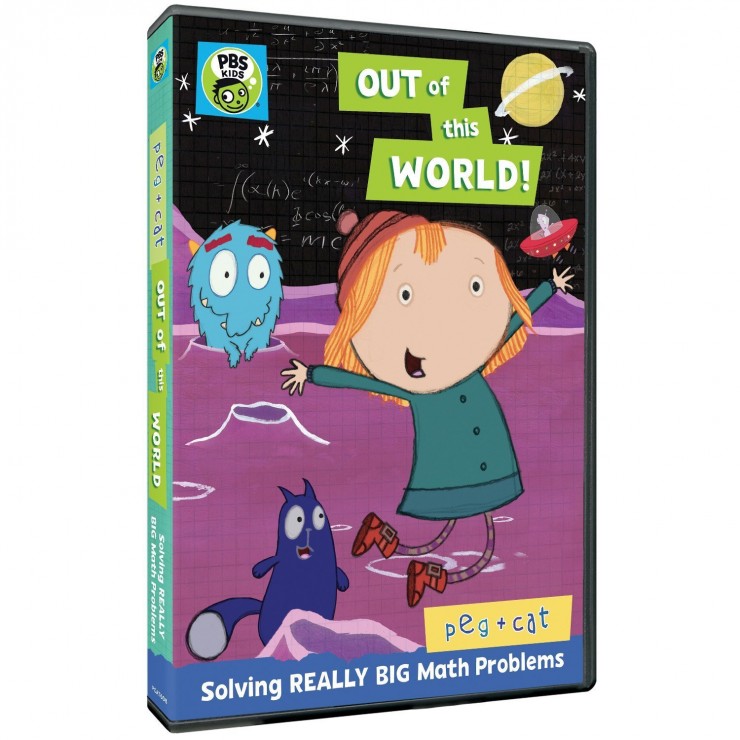 PBS Distribution recently released four stories from PBS KIDS’ popular PEG + CAT series from The Fred Rogers Company on the new DVD “PEG + CAT: OUT OF THIS WORLD.” Solving problems is even more amazing when you’re doing it on another planet! In this DVD, Peg and Cat have to put their heads together to fix their spaceship, outsmart Big Mouth (a crafty space alien who loves to dance), and win a cosmic t-ball game. Good thing they’re great at spotting patterns and working together as a team! Join Peg and Cat as they visit the Purple Planet and use their TOTALLY AWESOME math skills to solve problems and have fun-filled space adventures.

The run time of the new DVD “OUT OF THIS WORLD” is approximately 60 minutes, and its SRP is $6.99. The stories featured on the DVD include:

When their space ship is smashed, Peg and Cat must reassemble its variously shaped parts, and retrieve 16 stolen doohickeys.

While waiting in a long line, Peg and Cat try to help Richard realize his dream of being first in line for the first time.

At Richard’s family’s highly competitive annual picnic, Peg and Cat try to help Richard achieve his dream of not coming in third in every single event.

Peg’s t-ball team, the Mighty Nine, have no chance against a team of alien all-stars – unless Peg can use the aliens’ t-ball cards to predict where they’ll hit.

PEG + CAT is my granddaughter all-time favorite,this sounds like a nice watch!