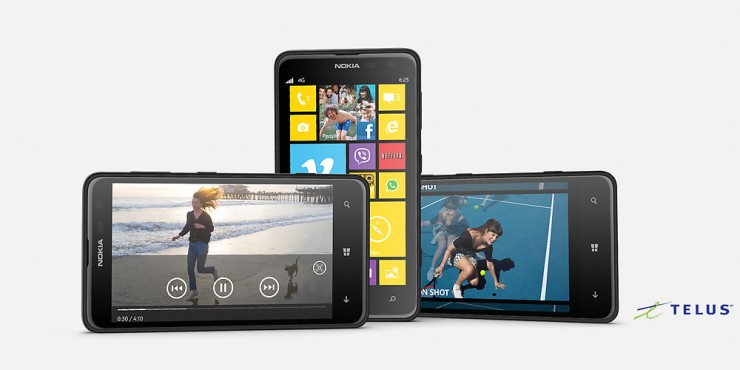 The Nokia Lumia 1020 and the Nokia Lumia 625 are now available in Canada and I was given a Nokia Lumia 625 to check out for myself.    The Lumia 625 combines a large 4.7-inch screen, Windows Phone 8, and high-speed 4G LTE Internet access that gives a high-end smartphone experience at a very affordable price.

I was a little worried at first switching to a phone with no keyboard, I was worried that I would not be able to adjust to touch screen only.  When I tried to use the touch screen keyboard on my previous smart phone I felt like I had the clumsiest fingers ever.  I was actually able to pick it up pretty quickly thanks to the nicely sized qwerty keyboard.  The Touch Screen also features Nokia’s super sensitive touch technology so it is easy to use wearing gloves – perfect for cold weather!

The phone features a large screen that runs almost edge to edge, however it uses only a 480 x 800 pixel resolution so rather than having more surface area on the screen thanks to the large screen size, everything just looks big.   Despite this, I love the vibrant colours it is able to display and since it is a Windows Phone everything just pops because of the Live Tiles on the Start Screen.  The screen itself is slightly curved at the edges and made with Corning® Gorilla® Glass which adds scratch-protection and damage resistance.

Although the Nokia Lumia 625 is much larger than my old smartphone, it is also much thinner so I have had no issues using it, even with just one hand to text.  The phone is a little heavy but I personally don’t mind as it gives a real sturdy feel which gives me confidence that it can survive a few drops.  (I will not be performing a test to determine how well it survives a drop, and I don’t recommend you test this either!)

The back of the Nokia Lumia 625 is a rubbery-feeling changeable polycarbonate shell which wraps around everything but the screen and is available in a variety of bright colours.  You can find the Back, Start Screen and Bing Search buttons on the front bottom end of the phone with the volume, power/lock and two-step camera buttons down the right edge.  With a black shell it is hard to see the side buttons but a quick change over to one of the more vibrantly covered shells would easily correct that.

The Lumia 625 has a 5-megapixel camera, and Nokia’s Smart Cam app.   The Smart Cam app takes 7 photos at once when you press the shutter which allows you to choose the best shot and use some cool effects.  Despite the relatively low megapixel count, the quality of photos are still pretty good.

The battery life on the phone is excellent which is a relief as I rely on my phone for everything when I am not at home, and I am known to forget my charger!  Here are the specs I found which seem about right from what I have seen:

The Nokia Lumia 625 runs Windows Phone 8 which features the Windows Store.  While the Windows Store lacks apps easily found on Apple and Android phones such as Instagram, it is easy enough to find alternatives.  For example, I was easily able to find “Instance”, which is a free and fully featured Instagram app for Windows Phone.   So while you may have issues finding “official” versions of an app, it is generally easy enough to find a more than adequate app to do the same thing.

One built in app that I love and definitely recommend setting up right away is Data sense which allows you to track your data usage on the phone.    It also with full global navigation (the latest versions of Nokia’s HERE experiences), and with ad and subscription-free Nokia Music streaming.

I also love the built in Kids Room app which allows me to lock off the phone for my daughter to use and restrict its use to specified music, videos and apps.  This way I can give her the phone to play with, without worrying about her calling someone in my contact list and other such fun things.

I am a little disappointed that the battery is not user-accessible, and although the phone hasn’t frozen yet, I am a little curious as to how well the power button will function to correct an issue that would normally require a battery pull in every phone I’ve ever owned.  Hopefully I will never find out, fingers crossed!

Overall though, I have been pleasantly pleased by the Nokia Lumia 625 and can honestly say it has completely replaced my other Smartphone.  This is a great phone performance and feature wise, especially considering the fabulous price point.

The Nokia Lumia 625 is available exclusively in Canada at TELUS in black (please visit www.telusmobility.com/NokiaLumia625 for full pricing details).

It looks like a tablet. What a nice phone. Would love to have one

I have a Lumia 520 and I absolutely love it. And its my first cell-phone ever hahah

I just entered a contest to win one, I just love it !!

I love it! It looks like a little tablet! Love that it has cool colours too!