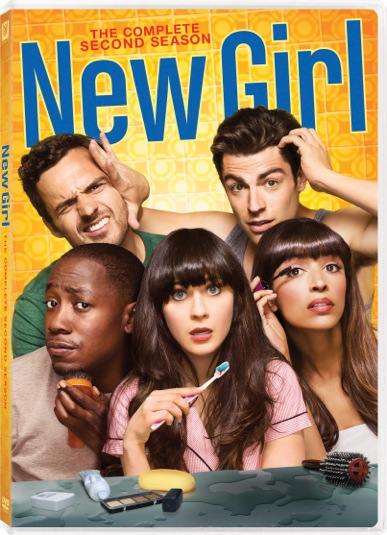 The romantic tension between Jess (Emmy® Nominee Zooey Deschanel) and Nick (JakeJohnson) escalates in the hilarious, quirky second season of “New Girl” — but will they ever hook up? Meanwhile, Schmidt fails to be hip, Winston isn’t “prepared” for a hot date, and Nick faces a death in his dysfunctional family. While Jess does her best to replace Cece on a modeling job and a drunk Elvis impersonator at a funeral, Schmidt and Winston hope to rearrange Cece’s arranged marriage. Relive all 25 outrageous episodes featuring guest stars like Jamie Lee Curtis, Rob Reiner and Dennis Farina, and enjoy fun bonus material — including the extended version of the hugely popular “Virgins” episode — only available on the DVD.

Any fan of FOX’s hit comedy television series “New Girl” will be happy to know that the Complete Second is now out on DVD.

New Girl is the kind of show that you will either really love or really hate.  I personally think it is pretty hilarious.  The characters are quirky, well acted and just plain funny.  The show is pretty much character driven vs. situation driven so if that is your thing, and you haven’t caught New Girl on tv yet this DVD is worth snatching up.  This is one series that holds up well to second (and more viewings) so it is worth just buying the DVD.  Especially if you are like me and can never remember to just sit down and watch TV at the right time to catch new episodes in a series!

In addition to the 25 episodes in season two of New Girl, New Girl: The Complete Second Season also includes deleted scenes, Cooler (commentary), Full of Schmidt, gag reel, and an extended version of the Virgins episode.

Just for fun, you and your friends can photobomb the cast of New Girl in three easy steps! Visit http://www.newgirlphotobomb.com/ and choose your favorite scene from New Girl Season 2 to add your photo to!

My fave character has to be Jess. Thanks for letting us know the Season 2 DVD is out. This will be a perfect Christmas gift for my sister! :) She loves the show even more than I do.

(New Girl Season 2 DVD Review) My husband & I watch this one every week on TV, that Jess is a nut!

Never seen it but I've heard such good things!

I have never seen this show. What would you say it is similar to?