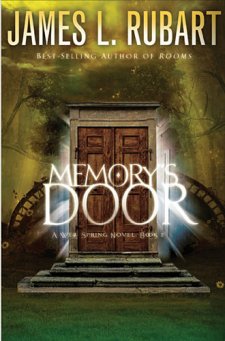 The prophecy brought them together. But the Wolf has risen, and now their greatest battle begins.

The four members of Warriors Riding have learned to wage war in the supernatural, to send their spirits inside people’s souls, to battle demonic forces, and to bring deep healing to those around them.

But their leader Reece is struggling with the loss of his sight. Brandon is being stalked at his concerts by a man in the shadows. Dana’s career is threatening to bury her. And Marcus questions his sanity as he seems to be slipping in and out of alternate realities.

And now the second part of the prophecy has come true. The Wolf is hunting them and has set his trap. He circles, feeding on his supernatural hate of all they stand for. And he won’t stop until he brings utter destruction to their bodies . . . and their souls.

I hadn’t realized until I received this title that it was the second in a series.  I usually try to read a series in order and not start part way through so I was worried that I wouldn’t be able to follow along.   I think I would have been able to get into the story easier had I read the first book, however this title does manage to stand on its own.

This is a Christian fantasy novel, and the four main characters are all very devoted to the point where they act completely on faith alone at times.  As someone who reads a lot of fantasy fiction I found that this brought an interesting facet to the novel but nothing really unusual as many fantasy series focus a lot on “made up” religions so it wasn’t much of a leap for this to be based on Characters following the Christian faith.

I was a little bit disappointed with the reveal of the wolf and the end of story.  It wasn’t really what I had been imagining, however the novel was still pretty good.

Disclosure of Material Connection: I received this book free from the publisher through the BookSneeze.com®  book review bloggers program. I was not required to write a positive review. The opinions I have expressed are my own. I am disclosing this in accordance with the Federal Trade Commission’s 16 CFR, Part 255 : “Guides Concerning the Use of Endorsements and Testimonials in Advertising.”

I'm not a huge fan of fiction, but you seem to have such a love of reading that it's inspiring!

This isn't my kind of read but it is my oldests! I'll have to find out if she's read the first one, she too likes to read series in order.