In Skyfall, Bond’s loyalty to M is tested as her past comes back to haunt her. As MI6 comes under attack, 007 must track down and destroy the threat, no matter how personal the cost.

The movie opens with a botched mission to Istanbul that leaves the names of undercover M16 spies in the hands of a villain.  Bond, presumed dead, is in emotional crisis but makes himself known to M when M16 comes under fire.The villain in Skyfall is “Silva” (Javier Bardem), a smooth and creepy foe blending a mix of intelligence and quirk in an effectively eerie manner. 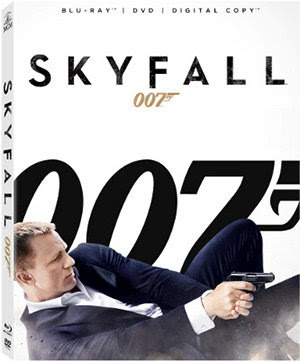 Director Sam Mendes reassures viewers who were disappointed in Quantum of Solace early on in the film that Bond is back in earnest when a train car crashes behind him and Bond (Daniel Craig) coolly adjusts the cuff of his shirt and carries on in true 007 style.   The action in Skyfall is riveting, driven by the plot and characters leaving the viewer breathless.


Cinematographer Roger Deakins has also managed to create a Bond film as visually stunning as it is exciting.
Skyfall is dark, sleek and sensual and must be placed alongside the other great 007 films: Goldfinger, Thunderball, Live and Let Die, Licence to Kill and Goldeneye.
Skyfall is now available from Metro-Goldwyn-Mayer Studios, Sony Pictures Entertainment and Twentieth Century Fox Home Entertainment on Blu-ray, DVD and Digital Copy.

Check out the Skyfall Lodge and access behind the scenes videos, stills and more.

I’m not a big fan of James Bond movies. but hubby would love to see this!

I loved this movie -- first Bond movie I ever saw, and it was really good.

I saw this movie and it was really good! I would love for my husband to see it when it comes out on DVD/Bluray.

I'm a big fan of James Bond movies. Would love to see this!