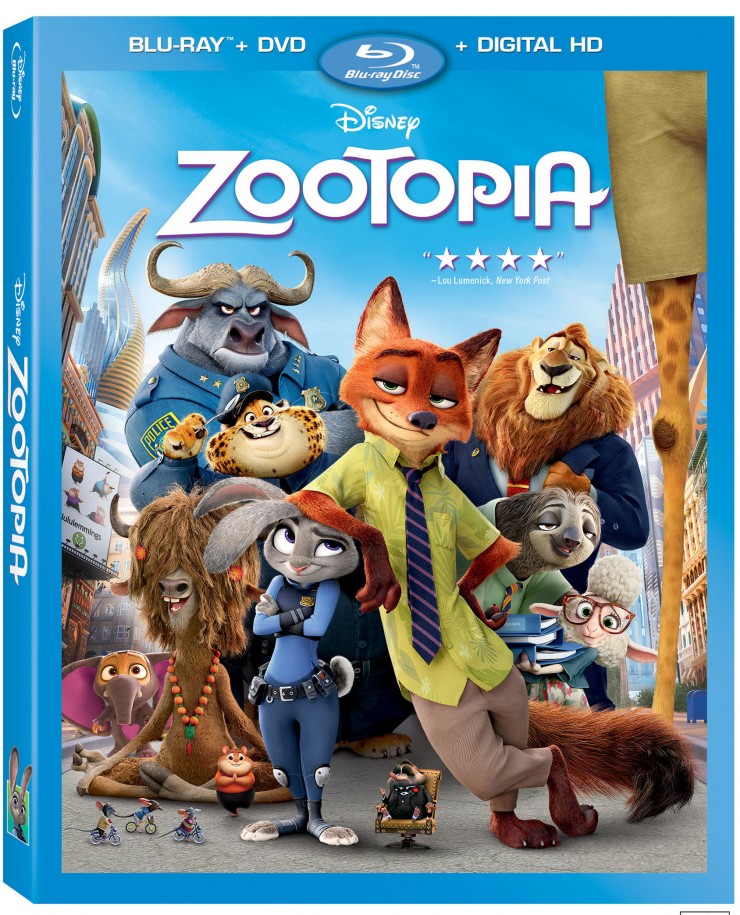 The progressive mammal metropolis of Zootopia is a melting pot where animals from every habitat live side by side and “anyone can be anything.” But when new rabbit police officer Judy Hopps (voice of Ginnifer Goodwin) arrives in town she discovers that being the first bunny on a police force of tough, hulking animals isn’t so easy. Determined to prove herself, she jumps at the opportunity to crack an unsolved, challenging case even if it means working with a fast-talking, scam-artist fox, Nick Wilde (voice of Jason Bateman), to solve the mystery. But the case leads these two unlikely partners to an uneasy conclusion that Zootopia’s “evolved” society is being pulled apart by unseen forces determined to use fear to take control of the city by turning predators and prey against each other.

Disney’s “Zootopia” has broken records worldwide earning more than $900 million at the global box office to date. The best reviewed movie of 2016, critics and audiences around the world have fallen in love with the wonderfully innovative animal metropolis of “Zootopia” and the comedic chemistry of rookie rabbit officer Judy Hopps (Ginnifer Goodwin) and scam-artist fox Nick Wilde (Jason Bateman).  It’s been called one of the best buddy cop comedies in years!  Thankfully, there’s more—much more.

The runaway hit is available today on Digital HD, Blu-ray™, Disney Movies Anywhere, DVD and On-Demand (does not include bonus). Viewers will not only be able to enjoy the vibrant world of Zootopia and reunite with their favourite characters, but also discover more about the evolution of this extraordinary tale through in-depth bonus offerings.

Features include candid conversations with filmmakers and artists behind Zootopia, an alternate opening, never-before-seen characters and deleted scenes and a sneak peek at some of the hidden Easter Eggs that make reference to Disney Animation’s most beloved films and characters.

•    Zoology: The Roundtables – Ginnifer Goodwin hosts an in-depth look at the movie’s characters, animation, environments and more. The artists at Disney Animation give a rare and in-depth look at the complexities of bringing an all-animal world to life from the ground-breaking technology behind the characters’ fur and clothing to the varied and vast environments of Tundratown, Sahara Square and the Rainforest District as well as the deep thought and research given to bringing 64 unique animal species to life through animation.

•    The Origin of an Animal Tale – Follow the story’s development from its origins to a big story shift that turned the film upside down. In this feature-length documentary, filmmakers give a candid look into the difficulties of creating the story of Zootopia and the bold decision to switch the main character late in the production process, putting one resolute rabbit center stage.

•    Research: A True-Life Adventure – The filmmakers traveled the globe to find inspiration for the diverse characters and amazing city of Zootopia. They reflect on the importance of research and how a deep dive into animal behavior at Disney Animal Kingdom theme park and a deep immersion into animal society on the African savanna shaped and inspired the characters of Zootopia and changed the filmmakers’ lives forever.

•    Z.P.D. Forensic Files – Find the movie’s hidden Easter Eggs. Every city has its hidden gems, especially when it has been created by the filmmakers of Disney Animation who love nothing more than sprinkling hidden references to some of Disney’s greatest animated features throughout the story.

•    Deleted Characters – Directors Byron Howard and Rich Moore introduce citizens of Zootopia who did not make the final cut.

Alternate Opening – Young Judy Hopps rescues a fellow classmate and realizes she can reach beyond a life in carrot farming to a future in law enforcement.
Wild Times! Pitch – Nick desperately pitches the bankers of Zootopia on funding Wild Times!, an amusement park made exclusively for the predators of Zootopia and a sure-fire, money-making scheme for Nick and his friends.
Alternate Homesick Hopps – After a frustrating first day on the force, Judy has a conversation with her parents.  See how this scene changed from a heartfelt conversation with her parents to tough love when her parents discover their daughter is only a meter maid and not a “real cop.”
Detective Work – Judy borrows a fellow police officer’s computer to conduct research, which turns out to be no small task.
Alternate Jumbo Pop – In this early version of the story where Nick was the main character, the filmmakers and Jason Bateman were able to take hustling to a new level.
Hopps’ Apartment – When Judy’s entire family pays her a surprise visit they are shocked to discover the company she’s keeping.
The Taming Party – In this emotional clip from an early version of “Zootopia,” Judy attends her first “taming party” and gains a deeper understanding of the plight of the predator.

•    “Try Everything” Music Video by Shakira

I wasn’t sure what to expect the first time I viewed this movie.  I am not huge on the talking animal type movie as they aren’t usually my type of thing but my 4 year old had seen the previews and really wanted to watch it. I expected an overload of cute and a fun movie for the girls, however I did not expect to find such a clever commentary about our society that I actually enjoyed watching. Zootopia tackles some difficult topics in the form of satire from ethnic profiling to mistrust of police.

Of course, for kids its a family friendly buddy-cop film with an amazing, strong and well-written female lead character.  Kids will find the scene with the DMV staffed by sloths hilarious while adults will get a good laugh at the joke. There are plenty of nods to the adults in the audience that I thought went beyond the usual Disney fare, and it was all so well done.

Many within my generation will find Judy’s tale rather poignant – that is believing she can achieve her dreams through hard work and determination only to learn that the world does not want her to succeed.

The animation is gorgeous, with plenty of painstaking detail – can you imagine the work that went into animating all that fur?

I highly recommend this film – especially on blu-ray so you can fully enjoy the attractive and details animation work. Zootopia is definitely another Disney hit, and perfect for the whole family.

Have not seen this one yet but i have heard its a fun watch!