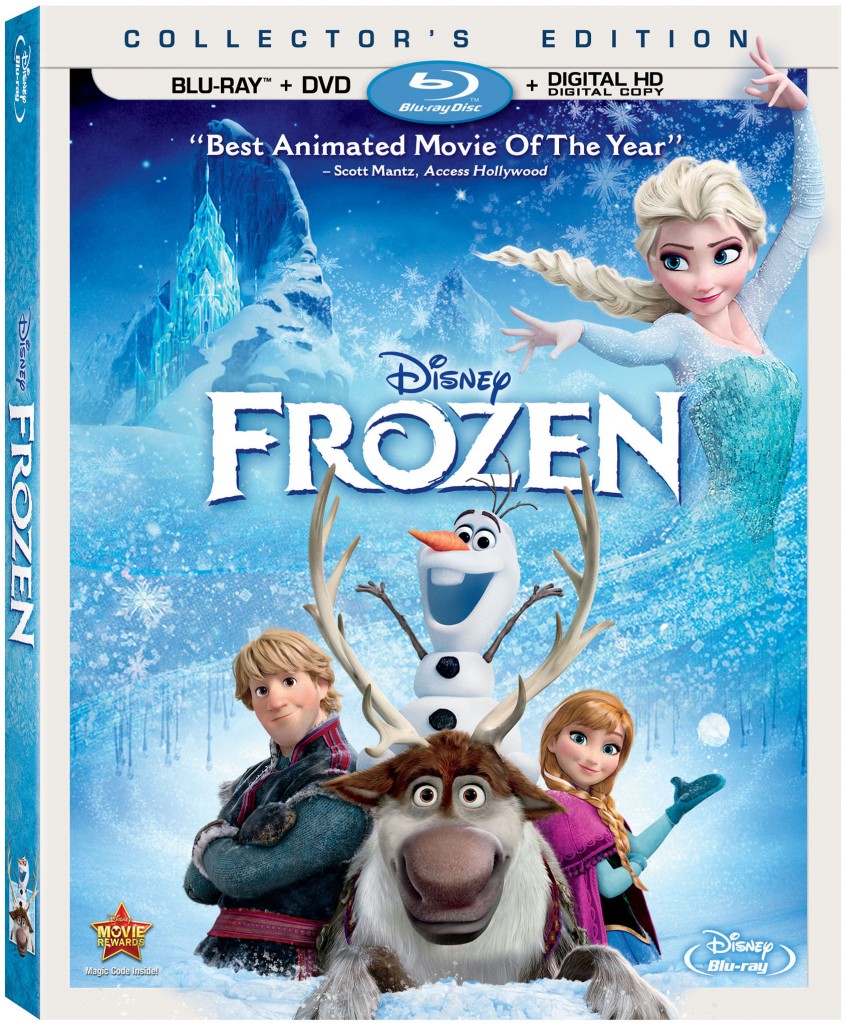 Walt Disney Animation Studios presents a chilly twist on one of the most humorous and heartwarming stories ever told. “Disney Animation’s best since The Lion King” (William Bibbiani, CraveOnline) will melt your heart.

Fearless optimist Anna sets off on an epic journey — teaming up with rugged mountain man Kristoff and his loyal reindeer Sven — to find her sister Elsa, whose icy powers have trapped the kingdom of Arendelle in eternal winter. Encountering Everest-like conditions, mystical trolls and a hilarious snowman named Olaf, Anna and Kristoff battle the elements in a race to save the kingdom.

We sat down on the weekend to watch this DVD and Keira actually managed to sit down for the entire movie from start to finish.  Quite a feat for a just turned two year old girl.  Of course there was the time when she got up to get the phone so we could call Auntie so that Auntie could “watch” it with us.  Yes, there was that.  Other than that though.. she was captivated by Frozen.  As was I.

The animation, from start to finish is dramatic and stunning – from tall stony peaks to swirling snow and ice.  As a young girl Elsa has a close call with her powers of shooting ice and snow from her fingertips.  She hides away in the castle, even from her beloved sister, Anna.  When their parents die Elsa must take over but at her coronation she loses control of her powers when she learns her sister has gotten engaged to a prince she just met.  Elsa runs off into the mountains away from the scared people in the city below, leaving blizzards and ice in her wake.

Anna travels into the mountains in search of Elsa to convince her to return and stop the strange weather when she teams up with Kristof, an Ice salesman.  Don’t worry though, while there is a little romance between Kristof and Anna, the story remains one about Anna and Elsa.  This is a story about sisterly love.

This is sure to be the next classic Disney princess movie given time thanks to its beautiful animation, catchy songs and emotional story.  Disney’s still got it!

sold out everywhere near where I live ugh!

We can't wait to watch this movie!

I'm seeing this movie absolutely everywhere. I think I better watch it.

I haven't seen this movie, but would like to! I heard that they used the music to shape the movie (like in the days of Beauty and The Beast and The Little Mermaid). I love great songs that go with a Disney movie...they really make the movie for me!

I still haven't seen this movie! My daughters watched it while we were out for a few hours one evening.. maybe this weekend.