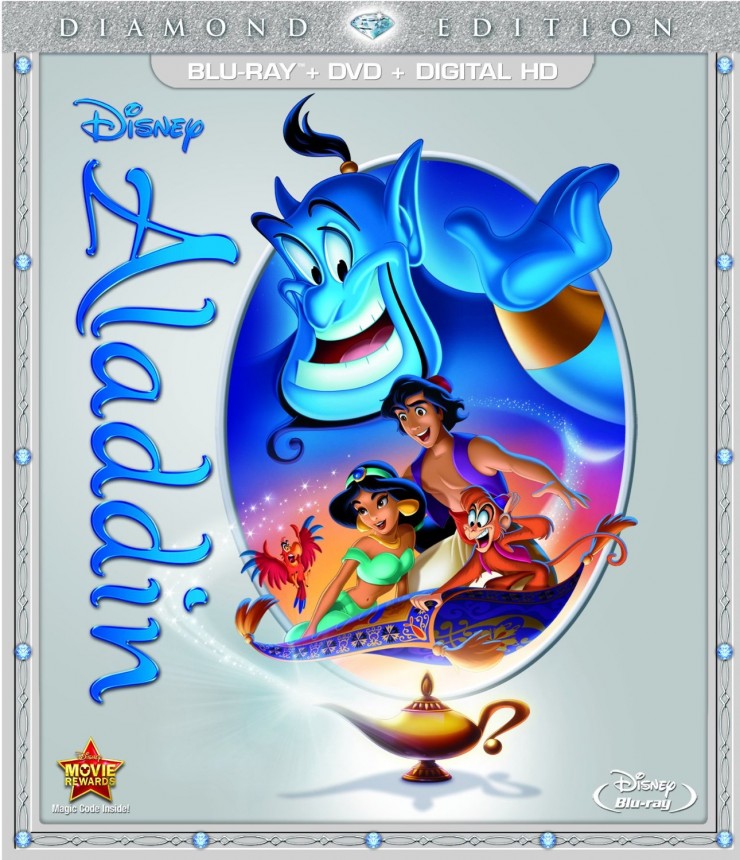 Climb aboard for a magical carpet ride with non-stop laughs, action-packed adventure and Academy Award-winning music that will make your heart soar (1992: Best Music, Original Song, “A Whole New World,” Original Score). Now for the first time ever, a whole new world of Disney’s ALADDIN is revealed in a whole new way on Blu-ray and Digital HD — with never-before-seen bonus!

With the help of a hysterically funny, shape-shifting, 10,000-year-old Genie, street-smart commoner Aladdin and clever, confident Princess Jasmine join forces against the evil sorcerer Jafar to put an end to his plans to take over the kingdom!

One of the first movies I remember seeing in theatre was Aladdin.  I remember going with my family to watch it at the Theatre in the mall – long gone now!  I fell in love with Aladdin and come Christmas we were given the VHS copy of it as a “family gift”.  That VHS tape saw a lot of action between me and my siblings.

What really makes Aladdin special is Genie, played by Robin Williams.  He was my favourite character from the movie and I was even given a Genie stuffed toy for my birthday.  His silly, over the top but completely loveable character won me over all over again watching this Blu-ray with my own kids.  Talk about bittersweet!

When it comes to Disney Princesses, Jasmine is one of my favourites personality wise.  I love that Jasmine is so strong willed, determined and so down to earth.

Jafar and Iago are the perfect pair of villains or “bad guys” as I used to call them.

Really, Aladdin has it all – adventure, a captivating story, characters to fall in love with, characters to hate and songs meant to be sung along to! 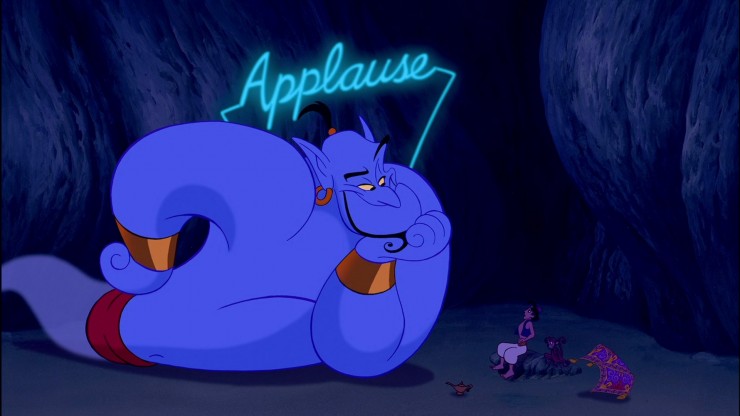 Why pick up the Diamond Edition though?  Aladdin looks great in HD – the colours are vibrant and the details are noticeable.  The audio is also sharp with immersive sounds throughout the film.  A definite step up from my old VHS version for sure!

There are of course the bonus features included which make upgrading to this release worthwhile.  The classic extras are there plus “Aladdin: Creating Broadway Magic” which explores the creation of the musical production. “Unboxing Aladdin” is an overview of some of the Easter Eggs included in the film, and “Genie 101” is an explanation of the pop-culture references made by Genie that definitely went over my head as a child.

What really stood out for me though was the inclusion of “The Genie Outtakes” – these are Robin Williams improvisations accompanied by animated storyboards that will have you laughing pretty hard.

I’ve been waiting for this release for awhile and it definitely did not disappoint.  I am sure it will be under more than just a few trees this year!

Disclosure:  I received the above mentioned product for review.  However, all views and opinions are genuine and my own.

My grandchildren would love this

This was one of my son's favorite movies while growing-up. Now we can share it with his son and my grandson. So exciting because this would be a great gift for the Holidays & his birthday (the day after Christmas). Thanks for the fun information. :)

My kids have never seen Aladdin so we are excited to see it on DVD!

My grandchildren would love this, I know I did the first time I saw Aladdin, many many years ago.

I am so excited to see Aladdin again :) It was one of my favorite Disney movies growing up