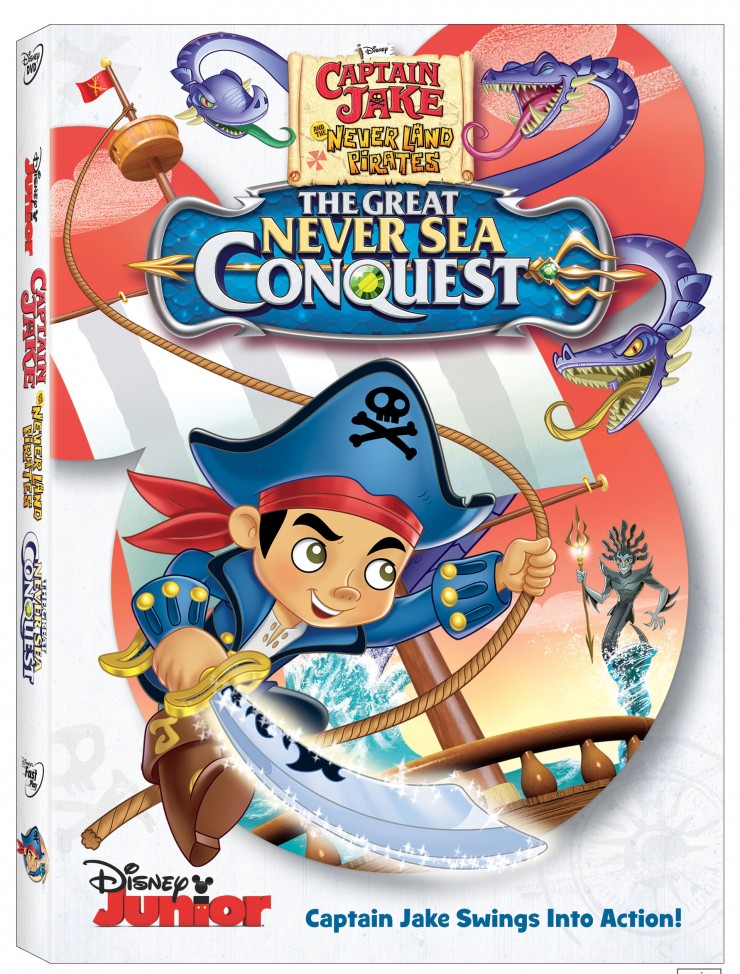 Join the Newly Promoted Captain Jake and His New “Never Land League of Pirate Captains” as They Battle the Evil Lord Fathom in CAPTAIN JAKE AND THE NEVER LAND PIRATES: THE GREAT NEVER SEA CONQUEST!

This adventure-filled DVD includes The Great Never Sea Conquest plus 6 additional episodes of the hit Disney Junior series, over two hours of fun! Plus FREE inside every DVD is an exclusive 3D Colossus puzzle ship you can’t get anywhere else!

Join newly promoted Captain Jake as he unites Never Land’s all-time greatest pirates! When evil mer-witch Ezmeralda tries to take over the Never Sea by awakening the Strake, a legendary three-headed sea serpent, Jake and his crew try to intervene but encounter Lord Fathom and his sidekick Sinker. Jake forms a team of “Never Land League of Pirate Captains” to battle them all and in the process, outfitted with a magical new sword and a powerful new ship, (the Mighty Colossus), he becomes a Captain himself. Loaded with excitement, additional adventures and a powerful message about believing in yourself, this high-stakes, high-seas adventure is oceans of swashbuckling fun for everyone!

The DVD starts off with the 46 minute season 4 première – The Great Never Sea Conquest which sees Jake joining the League of Pirate Captains and taking on Mer-wizard Lord Fathom. The adventures continue from there with a selection of episodes that little Jake fans will really enjoy.

The DVD case comes with a shimmery, embossed slipcover like most of the newer Disney Jr DVDs.  It’s a feature I like because the kids can easily tell which DVDs are OK to watch without having to ask, plus the slip covers are pretty.

It does include a cardboard cut-out puzzle of the pirate ship Colossus.  It does require an adult to assemble and isn’t likely to last long as it is built from cardboard, but it is a fun bonus the girls have enjoyed playing with.

Overall, this DVD is a great pick for fans of Jake and the Never Land Pirates.

One Frugal Mom eh reader will win their own copy of Captain Jake and The Neverland Pirates: The Great Neversea Conquest DVD.  Giveaway open to CAN/USA and ends on Feb 12th at 11:59 pm EST.  See giveaway tools form for entry and T&C.

My daughter likes Jake! It would go to her if I were to win!

I would give this super cute DVD to my little grandson!!

My grandson would love this movie and Jake is my favorite

This would be for my son. He loves Jake.

I would like to win this for my nephew, because he loves this stuff. He would think I am so cool if I could win this for him.