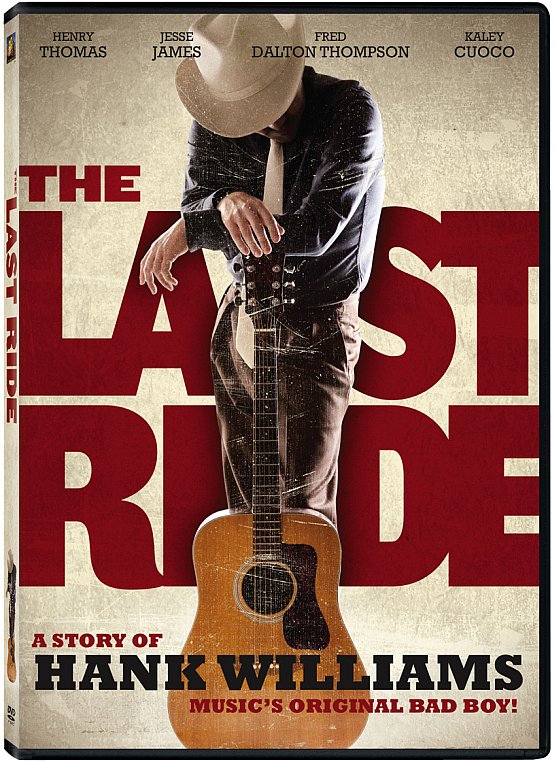 The Intimate Look at the Final Days of One of the Greatest Singer-Songwriters in American History Debuted on Blu-ray and DVD June 4th 2013.

Based on the controversial life story of singer-songwriter, Hank Williams, The Last Ride tells the powerful tale of country music’s original bad boy. The man, the myth and the music come together when Williams travels from Alabama to a series of New Year’s shows in West Virginia and Ohio. This remarkable journey leads straight into the heart and soul of the legendary performer…as he takes one last shot at redemption. Featuring all-new versions of Hank Williams’ greatest songs, this emotional tale of hope and truth is one you’ll never forget.

With 11 number one songs throughout his career, Williams’ music continues to touch people’s lives long after his passing 60 years ago. Former President Bill Clinton has said of The Last Ride that it “takes us back to rural America in the 1950s, tells the story simply, and uses the music deftly, both to intensify the drama and to remind us of the timeless genius of Hank Williams.” Former Arkansas Governor Mike Huckabee added “it’s a beautifully crafted and creative vehicle for telling the story of almost every gifted musician or actor who must reconcile the desire within to simply be a great artist and the demands of the public to be an accessible and accommodating celebrity.”

When I first heard of this movie I was expecting a movie along the lines of “Walk The Line” (2005, Twentieth Century Fox Home Entertainment) and since I loved that movie, I decided to give this one a try.

While it was definitely different from what I expected I did find myself truly enjoying the movie for what it was.

Without giving any spoilers the movie focuses on Hank Williams and a boy he takes on as his driver.

Hank’s name is never actually given during the movie and he refers to himself as “Luke” – an alter-ego Hank Williams did actually use; “Luke the Drifter”.

This left me feeling unsure at first as to what was happening.  Although I felt the movie focused more on the driver than Hank, it did give me a good feel for the man that Hank Williams was.

This movie is more character driven than action driven and Hank never actually performs during the film.

I've heard this was a good film