I recently had an experience with synchronicity that I want to share with you all.

About a month ago I was flipping through the channels and then on through Netflix to find something to watch.  I started thinking about how much I wish they would play Road to Avonlea reruns on the tv again.  I then started looking online for DVDs of the series.  I came across the Sullivan Entertainment online store and found they were selling the complete 7 series in a DVD box set. I almost bought it then and there but decided to put it down on my Christmas wish list since the season where people would begin asking me what I wanted was quickly approaching.

The very next day I found in my inbox an e-mail from the Canadian Film and Television company Sullivan Entertainment asking if I was interested in including them in my holiday gift guide.  I was offereed the opportunity to review one of the box sets of either Road to Avonlea or Wind At My Back.  I also loved Wind At My Back but synchronicity was pointing me towards the Road to Avonlea box set. Isn’t life funny?

Sullivan Entertainment offers a variety of items, including jewellery, perfume, DVDs, books, home decor and gift packages from their movies and shows such as Anne of Green Gables, Road to Avonlea, and Wind At My back.

Over the last couple of weeks I have looked forward to and enjoyed watching the Road to Avonlea box set I was sent to review. 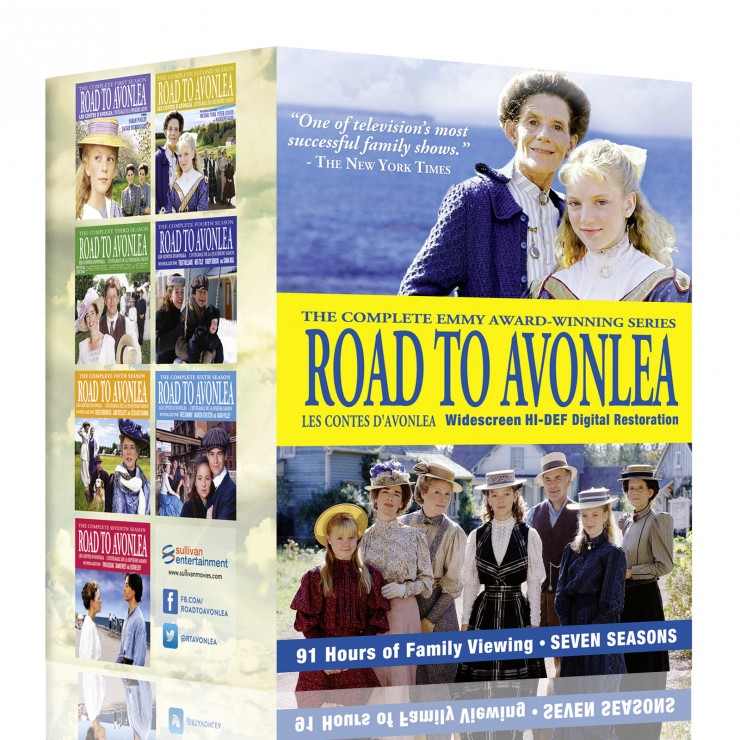 The adventure begins in 1903 when a sheltered city girl, Sara Stanley, is transplanted to a rural community to stay with the relatives of her late mother in this Anne of Green Gables spin-off. The perfect gift for the Avonlea enthusiast in your life. This bundle includes all seven seasons of the show, remastered in widescreen format. Allow yourself to be swept away by the vibrant characters, picturesque scenery, and compelling tales of Avonlea.

This set includes all seven seasons of the Emmy Award-Winning series, Cast Bios and 21 special feature documentaries including: A Fond Farewell: The Cast Looks Back, The Origin of a Series, The Kids of Avonlea, The Scripting of Avonlea, A Tour of the Kind Farm, Gifted Guest Performers + more!

When Road to Avonlea first ran it was a show my family looked forward to sitting down and watching together. Over the years I felt I was growing up with the King children as we were similarly aged, and I really felt connected to the characters. I was disappointed when it came to an end – but what a finale it was! I miss watching such high quality, family friendly television and Road to Avonlea is hands down my favourite show of all time.

I just finished watching the entire Road to Avonlea: The Complete Emmy Award-Winning Series Box Set and I am so thrilled to be able to watch through it over and over again.  It is one series I will never tire of.  The series is presented in widescreen, high-definition format and each episode has been completely remastered.  Let me tell you they have done a superb job with this presentation – it is great from the sound right down to the video quality! Watching the box set, if you didn’t know better you might even think this was a current series, and not 20+ years old.

What I realised watching the series over again was just how incredible the acting was and how dimensional and true to life the characters were. I felt as connected now watching the series as I did when I was a kid. I also discovered some episodes that never seemed to have been played as reruns although I do remember having watched them during the original run. The only downside of this box set, and the series is that there isn’t any more, (well aside from An Avonlea Christmas) and I always find myself wanting more.

All 91 episodes of the series are included as well as 21 special features including the retrospective series called “A Fond Farewell: The Cast Looks Back”.  The Road to Avonlea: The Complete Emmy Award-Winning Series Box Set is well worth picking up for yourself or as a gift, it is sure to be enjoyed for years to come.

If you want a nice family series to watch this is the one.

Road to Avonlea was a favorite of mine growing up

Wow - what a blast from the past. I totally remember this show!

I like when my kids watch old fashion shows that have good messages and morals. This looks like one of them!

I loved the Anne of Green Gables books when I was growing up. Adding this to my wishlist or maybe just my shopping cart & buying it for myself.