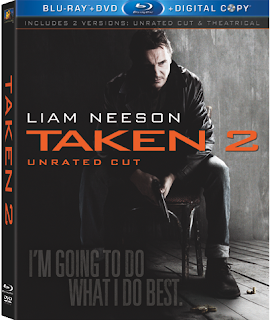 Taken starred Liam Neeson as Brian Mills, a security expert and former special-ops guy whose daughter Kim (Maggie Grace) is kidnapped while on a vacation trip to Paris. So he becomes a one-man wrecking crew, smashing his way through a ring of Eastern European human traffickers who are about to sell his daughter to a sheikh as a sex slave.

Taken 2begins with Brian as a more regular feature in his daughter and ex-wife Lenore’s lives.  He is teaching his daughter to drive and even invites the pair of them on vacation in Istanbul, Turkey when he finds out Lenore’s marriage is on the rocks.


Unfortunately the father of one of the traffickers killed in Paris vows revenge and tracks Brian down in Istanbul.  This time it is Brian and Lenore who are taken and it is up to their daughter Kim to save the day.

While I didn’t find Taken 2 to be as surprising or intense as Taken, it was still very entertaining and worth watching.  We get to see Neeson playing the ever calm, cool and collected super dad using his CIA skills to save the day.

As a testament as to how entertaining this film is, my husband managed to stay awake right through to the end.  This is such a rare event for us as he typically falls asleep during movie-nights somewhere between the 5-30 minute mark.

Have you seen Taken 2 yet?  How did it compare for you to the first movie?

Disclosure:  I received the above mentioned product in order to facilitate my review.  All thoughts and opinions remain honest and my own.

Thank you for the review. Anything that Liam Neeson is in I will certainly watch.

I haven't seen this one yet, I can't wait it should be even better then the first!

I just found out from a friend that Taken 2 was getting released this week, so I’ll definitely have to put it at the top of my Blockbuster @Home rental queue. I like the realism that comes with good action flicks like the first Taken, and I haven’t seen the second one yet, but I’m really looking forward to watching it based on the good things my friends say about it. While working at DISH I’ve tried to stay informed on all DISH products and services, that’s why I tried Blockbuster @Home, and like how I can afford to rent this movie (plus thousands of other movie titles and video games they have) for a flat, low monthly fee.

I haven't seen either but they sound like good movies. They're definitely on my watchlist.