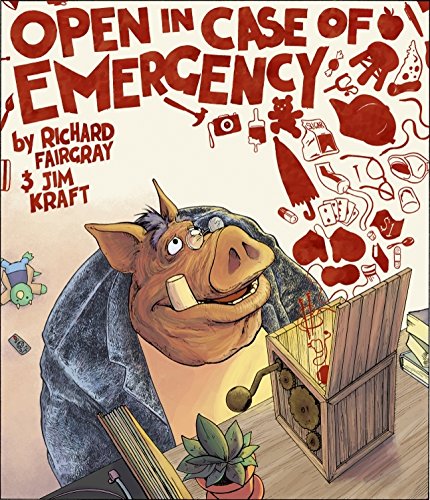 A mysterious box arrives at the door marked OPEN IN CASE OF EMERGENCY. That sure is handy for Zachary J. Warthog. Need a packet of sugar? Just open the box and it’s there! Clean underwear? Check.

Cyrus P. Rhinosaur gets a box, too. When he has real and true emergencies, like a tornado that hits his house, he decides the save the box for an even bigger emergency.

When Zack loses his box, suddenly—a real emergency! But no box to open . . .

Ava, my 3 year old, has a pretty decent collection of Richard Fairgray children’s books by now and she was excited about getting a new one to read. Open in Case of EmergencyOpen in Case of Emergency, like his other books, is full of imagination and fun. The illustrations work really well alongside the text, and they are really cute.  Ava loves discussing all the possibilities the box provides and filling in the rest of the story herself as it leaves you with a bit of a cliff hanger. Will there be a follow up? Time will tell!

Open in Case of Emergency is perfect for any child with a bright imagination in need of nurturing.

Richard Fairgray was born and raised in New Zealand and has been publishing since he was seven years old. His main focus since then has been comic books, but he has taken time out during his life to work on films, to perform stand-up comedy, to teach high school, and to stick labels on honey jars. He has been working exclusively in comics for the last six years with long-time collaborator Terry Jones. Their main work together is the on-going series called Blastosaurus. He lives in New Zealand.