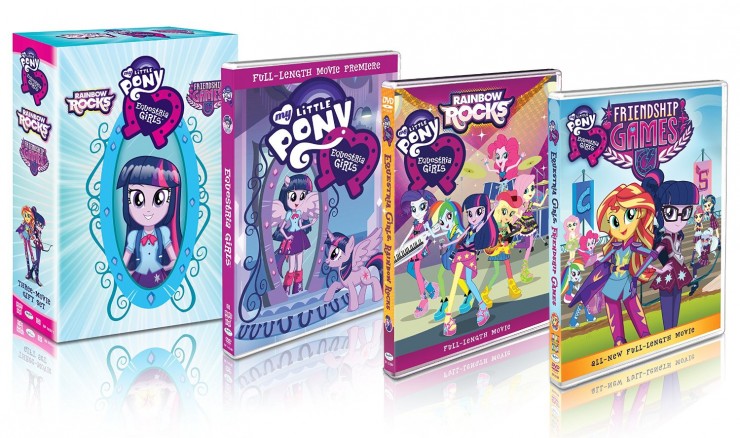 I’ve already reviewed each of the three movies so just click the title to see the review of each.

When a crown is stolen from the Crystal Empire, Twilight Sparkle pursues the thief into an alternate world where she transforms into a teenage girl who must survive her biggest challenge yet…high school. With help from her new friends who remind her of Ponyville’s Applejack, Rarity, Rainbow Dash, Pinkie Pie and Fluttershy, she embarks upon a quest to find the crown and change the destiny of these two parallel worlds.

Canterlot High is hosting a musical showcase and Rainbow Dash, Applejack, Pinkie Pie, Rarity, and Fluttershy are going to be performing with their new band, The Rainbooms. A new girl group, The Dazzlings, arrive at CHS and convince everyone to turn the friendly showcase into a Battle of the Bands. Tensions mount and a reformed Sunset Shimmer realizes that the Dazzlings may not be ordinary girls and are after something far more sinister. The Rainbooms call on Princess Twilight to return to their world to help them perform a musical counter-spell so that they can win a battle that now determines the fate of the entire school.

Canterlot High meets its rival school, Crystal Prep Academy, in a competition that’s a long-standing tradition — the Friendship Games. Sunset Shimmer is tasked with keeping magic out of the games to avoid the appearance of impropriety while she and her friends compete against Crystal Prep’s top students led by someone with an equal amount of interest in Equestrian magic — this world’s Twilight Sparkle.

This 3 DVD Gift Set is perfect for My Little Pony fans who may not have the feature length films on DVD yet, or for the MLP collector who just has to have everything MLP.  The lenticular cover is a nice touch! In stores everywhere, the 3-DVD set is also available to order on Amazon!

I'm sure that my granddaughters would love to have this 3 DVD Gift Set, they are big MLP fans.

My Little Pony fan would love this 3-DVD set ,will check it out on Amazon,thanks