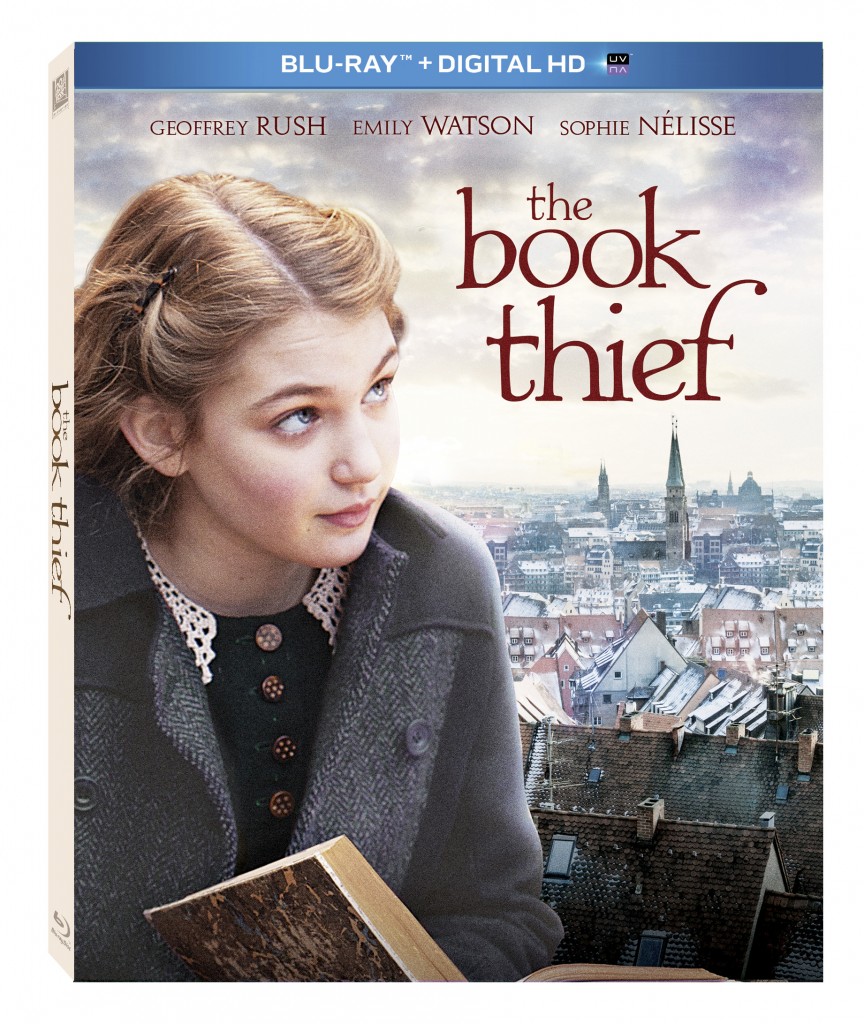 Based on the beloved best-selling book comes an “extremely moving” (Leonard Maltin, Indiewire) story of a girl who transforms the lives of those around her during World War II, Germany.  When her mother can no longer care for her, Liesel (Sophie Nélisse) is adopted by a German couple (OSCAR® Winner Geoffrey Rush and OSCAR® Nominee Emily Watson).  Although she arrives illiterate, Liesel is encouraged to learn to read by her adoptive father.  When the couple then takes in Max (Ben Schnetzer), a Jew hiding from Hitler’s army, Liesel befriends him.  Ultimately, words and imagination provide the friends with an escape from the events unfolding around them in this extraordinary, acclaimed film directed by Brian Percival (Downton Abbey).

I wasn’t sure what to expect when I first put in The Book Thief to watch, perhaps something like Anne Frank.  A story about Nazis, hiding a Jew, a story about a girl.  I soon found out how much more than that this movie is.  The Book Thief is adapted from the novel of the same name written by Marcus Zusak and directed by Brian Percival (Downton Abbey).

The film starts off with the narrated line “Here’s a small fact: you’re going to die.”  Before long you will realize that the narrator is Death who has an interest in Liesel (Sophie Nélisse) a young German girl travelling on a train with her ill brother to go live with foster parents in a small town in the German countryside.  Her brother dies on the way and is buried.  After the burial, Liesel finds a dropped book and takes it as a reminder of him.  This is first stolen book.

We then meet Liesel’s foster parents, Hans (Geoffrey Rush) and Rosa (Emily Watson) Hubermann.  I was immediately struck by how kind and welcoming Hans was compared to Rosa who is stern if not a bit harsh.  It is revealed that Rosa’s stern and hard nosed mannerisms is only a cover.  (Don’t judge a book by it’s cover?)

We soon learn that Liesel is illiterate and Hans lets her know that he’s not such a good reader himself and suggests that  they can learn to read together.  So The Book Thief learns to read.  She later earns her moniker when Liesel is tempted by her newfound love for literature and begins to “borrow” books from the Bürgermeister.

The story is moving and full of depth, brought to life by the capable cast.  Nélisse really shined as Liesel and proved herself to have a place beside veterans Rush and Watson.

This movie definitely comes recommended by me.  Just make sure to have a box of kleenex nearby, this one is a tear jerker!

(The Book Thief Blu-Ray Review) My brother saw this movie not too long ago and told me that it was very good. One that I would want to see too. I am hoping it's as good as The Boy In The Striped Pajamas was.

Thanks for the review! It sounds like a movie I would love!

I want to see this movie sooo bad!!!

I have read the book and loved it so I have been hesitant to see the movie! Your review makes me think that next time I have a night to myself I am going to watch this! Thanks for the review!

I havent seen this movie yet but I heard it was really good.