Ahoy, matey! Blue Sky Studios unveils a brand new chapter in one of the most successful film franchises of all time. Bringing together the visually epic and the emotionally powerful, ICE AGE: CONTINENTAL DRIFTsets sail on Blu-ray™ 3D, Blu-ray™, and DVD from Twentieth Century Fox Home Entertainment on December 11, just in time for the holidays.
The largest addition to the “crew” in Ice Age: Continental Drift is a band of pirates led by Captain Gutt and his first mate, Shira. They join the pirate ranks of many other swashbuckling tales, including Muppet Treasure Island, The Pirates! Band of Misfits and, of course, Peter Pan. 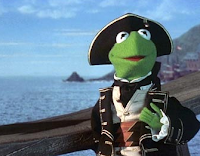 Muppet Treasure Island
The Muppets came back in a big way in this action packed movie based on Robert Louis Stevenson’s infamous novel, Treasure Island. Kermit the Frog and his motley crew set sail on the high seas to find a treasure only to engage in war with some pretty ruthless pirates.

The Pirates! Band of Misfits
Even pirates want recognition! Despite several failed attempts, The Pirate Captain takes his crew out on a mission to claim the most booty and win the coveted Pirate of the year Award. The film features the voices of some serious British acting royalty like David Tennant, Martin Freeman and Hugh Grant.

Peter Pan
Practically everyone knows the tale of Wendy, Michael and John Darling who are whisked away to mystical Neverland by the boy who will never grow up, Peter Pan. With the help of their new friends, the Lost Boys, Tinkerbell and, of course, Peter, they are able to bring down the evil Captain Hook and return home.

The Goonies
This epic adventure featured some of the 80’s best loved actors like Josh Brolin, Corey Feldman and Sean Astin, hot on the trail of legendary pirate One-Eyed Willy. If they can avoid capture by the notorious Fratellis and find the treasure in time, they might be able to save their hometown from a wealthy country club’s hostile takeover.

Hook
Years after his adventures with the Lost Boys, Peter Pan is a hardened litigator with absolutely no memory of his time spent in Neverland. So it’s not going to be easy for him to find his footing when Hook kidnaps his children and demands a rematch.

The Princess Bride
Was any movie ever as romantic as this tale of true love so great, it could not even be derailed by death?  Kings, castles, swamps, giants, con artists, wizards and, of course, pirates, make up this amazing, beloved film, which recently celebrated its 25th anniversary. 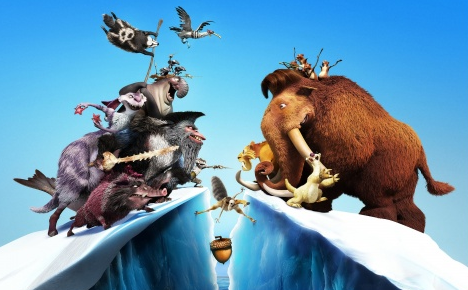 Everyone is back and then some! When Scrat’s nutty pursuit of the cursed acorn gives way to earth-shattering consequences, a continental cataclysm that triggers the greatest adventure of all for Manny, Diego and Sid begins. In the chaos, the herd is separated from their friends and family and the only way home seems to be through a ragtag menagerie of seafaring pirates determined to stop them.

Haven't seen this yet, but I think "iceberg" is a pretty safe bet, lol!

They use a iceberg