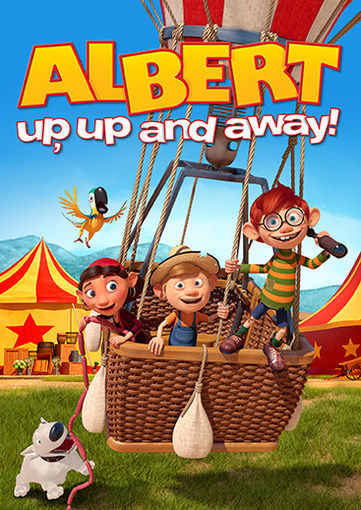 Join in the non-stop fun and breathtaking adventure that is Albert – Up, Up and Away when Shout! Kids releases a brand new DVD of the animated film on April 19, 2016.

Inspired by the beloved children’s book, Albert by Ole Lund Kirkegaard, and written and directed by Karsten Kiileric, this lively, animated tale whisks you on a journey that has to be seen to be believed!

Albert is a smart and cheeky boy, but his taste for mischievous pranks make him a menace in his small hometown. When he accidentally destroys the statue of a local hero and famous hot-air balloon captain, Albert is determined to make up for his mistake. He decides to venture into the world with his best friend Egon… and return as a hot-air balloon captain himself! But Albert and Egon’s quest takes a detour when a mean bandit takes advantage of the clueless boys to help him steal the world’s largest diamond. Adventure and excitement hit an all-time high in Albert – Up, Up and Away!

“Albert: Up, Up and Away!” is a fun animation about two best friends and their adventures. Albert wants to become a hot-air-balloon captain so that he can replace the statue that he destroyed when he was younger. His best friend, Egon, on the other hand, wants to become a pirate captain. This of course leads the boys towards the series of events that follow – ending with Albert getting his hot air balloon.

This is an amusing story of friendship that the whole family can enjoy.  My girls, 2 and 4 years old, really enjoyed watching this movie although I do not anticipate many requests from them asking to watch it over again – at least not in the way some of their favourites get asked for

I've not heard of this DVD before, not too sure if my grandchildren would want to watch this one, they have their favourites and seem seldom to watch anything else :-)

Looks like a cute DVD our girls would just love :)