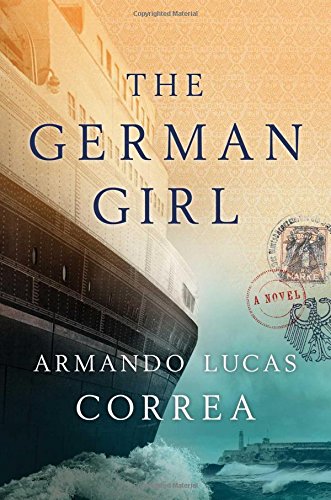 A stunningly ambitious and beautiful novel, perfect for fans of The Nightingale, Schindler’s List, and All the Light We Cannot See, about twelve-year-old Hannah Rosenthal’s harrowing experience fleeing Nazi-occupied Germany with her family and best friend, only to discover that the overseas asylum they had been promised is an illusion.

Before everything changed, young Hannah Rosenthal lived a charmed life. But now, in 1939, the streets of Berlin are draped with red, white, and black flags; her family’s fine possessions are hauled away; and they are no longer welcome in the places that once felt like home. Hannah and her best friend, Leo Martin, make a pact: whatever the future has in store for them, they’ll meet it together.

Hope appears in the form of the SS St. Louis, a transatlantic liner offering Jews safe passage out of Germany. After a frantic search to obtain visas, the Rosenthals and the Martins depart on the luxurious ship bound for Havana. Life on board the St. Louis is like a surreal holiday for the refugees, with masquerade balls, exquisite meals, and polite, respectful service. But soon ominous rumors from Cuba undermine the passengers’ fragile sense of safety. From one day to the next, impossible choices are offered, unthinkable sacrifices are made, and the ship that once was their salvation seems likely to become their doom.

Seven decades later in New York City, on her twelfth birthday, Anna Rosen receives a strange package from an unknown relative in Cuba, her great-aunt Hannah. Its contents will inspire Anna and her mother to travel to Havana to learn the truth about their family’s mysterious and tragic past, a quest that will help Anna understand her place and her purpose in the world.

The German Girl sweeps from Berlin at the brink of the Second World War to Cuba on the cusp of revolution, to New York in the wake of September 11, before reaching its deeply moving conclusion in the tumult of present-day Havana. Based on a true story, this masterful novel gives voice to the joys and sorrows of generations of exiles, forever seeking a place called home.

The German Girl is told from two perspectives: Hannah – the German Girl whose story begins in the streets of Berlin during 1939 – and Anna, her only living relative 70 years later. It is written in the vein of The Nightingale and All the Light We Cannot See in that the story being told is riveting and envelopes you in the forever changed life of a girl affected deeply by the Nazi regime. The writing is beautiful, descriptive and strings you along right up to the masterfully written and satisfying ending.

I enjoyed the parallels between Nazi Germany and Communist Cuba – I had no idea that Cuba sent “enemies of the state” to work camps.  I’ve been to Cuba several times, the first time was in the late 90’s when I spent two weeks among the locals in Havannah, Varadero, Cardenas and a small town named Itabo. The descriptions of Havana were very familiar (The author is Cuban) and brought me back to when I was 16 and walking through the streets of Old Havana… particularly while walking down the Malecón waterfront promenade as waves crashed against it, spraying water up at us.

Hannah’s story is a unique and heartbreaking story of loss and it does an incredible job of bringing to light the story of the St. Louis and it’s hero captain Gustav Schroder. This is a truly exceptional piece of historical fiction that you are sure to enjoy if you loved The Nightingale and All the Light We Cannot See.

This book sounds very interesting. Hope to read it soon.

I love Cuba too but I had no idea about this piece of history. I'll have to read the book to learn more!

This does sound like a book i would enjoy reading even though it's a heartbreaking story.Thanks for the review.

I really like the sound of this book, interesting, intriguing and sad too.

This sounds like a great book. I am going to look for it at my local library.