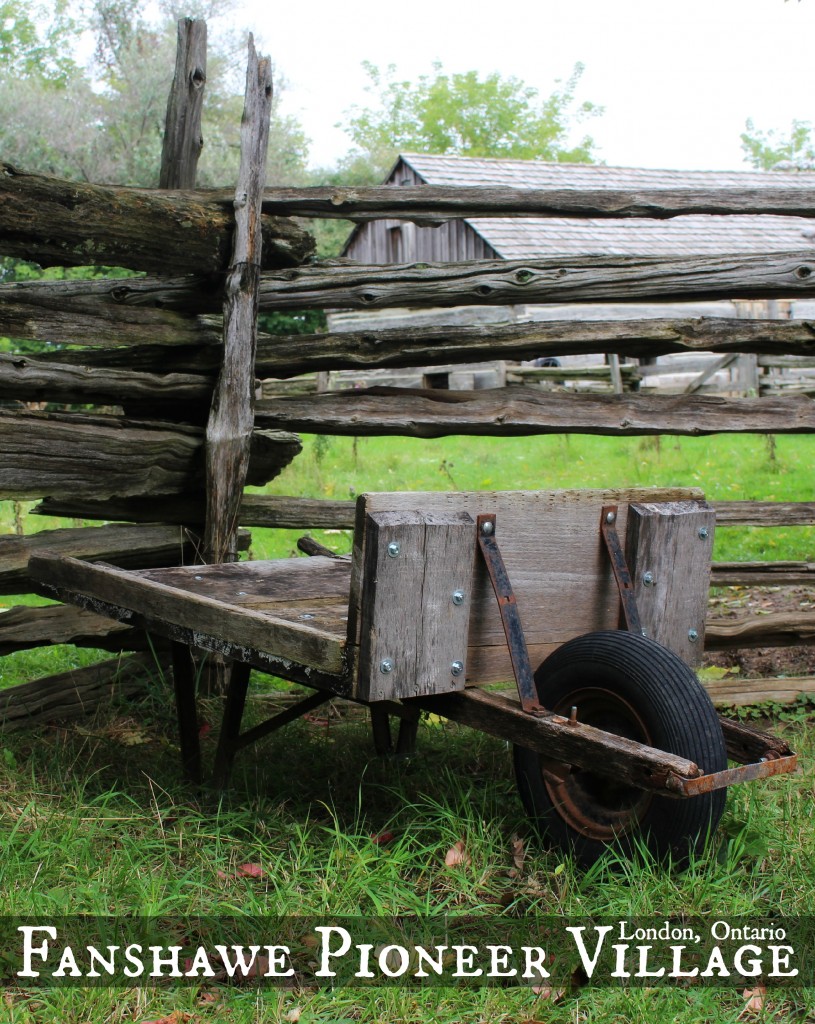 We took a much needed family road trip to London in South Western Ontario this weekend and stopped at a few fun destinations for families.  The first attraction we took in was Fanshawe Pioneer Village.

Fanshawe Pioneer Village is an interactive museum that allows visitors to explore the story of rural communities in South Western Ontario from 1820 to 1920 as well as the founding and development of the City of London up to 1840.

The village is staffed with costumed historical interpreters who demonstrate daily life in the 19th century through trade-work, farming, domestic chores and social pastimes.  There are original houses, churches, a woodworking shop, a school and more. 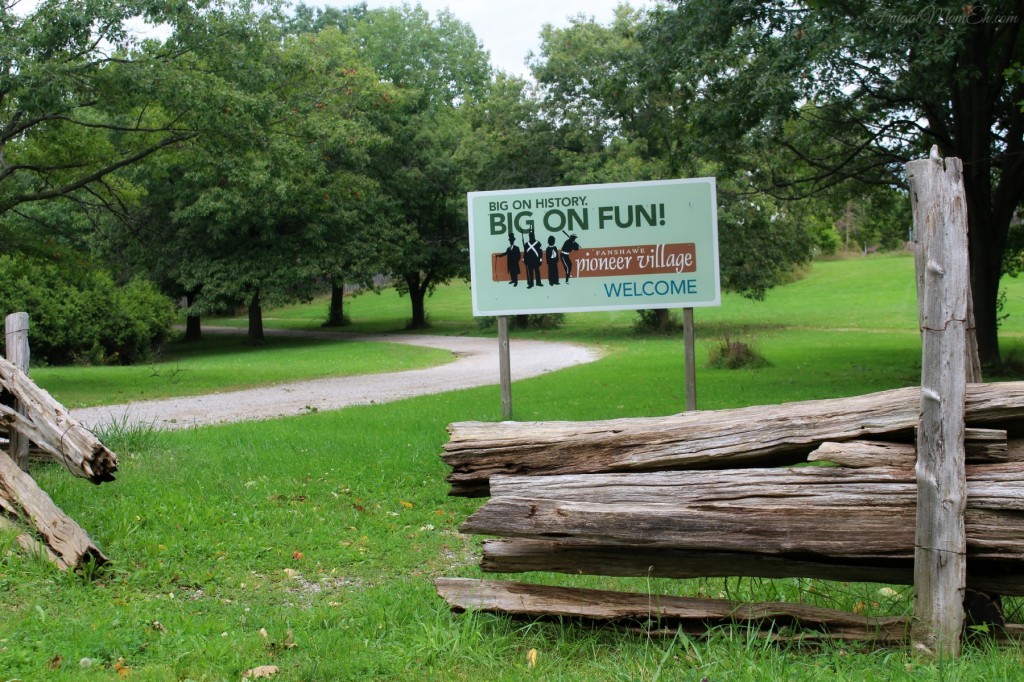 Many of the buildings are wheelchair and stroller accessible however it is a good idea if you are bringing a baby to take along a baby carrier instead or be prepared to take baby in and out of the stroller repeatedly to view buildings that are not accessible or have an upper floor.

There is also a Village Café which offers homemade soups, baked goods and other fare perfect for stopping in for lunch or even just a little snack.  The Denfield General Store  operates as a full gift shop offering a unique variety of hand crafted gifts and souvenirs. 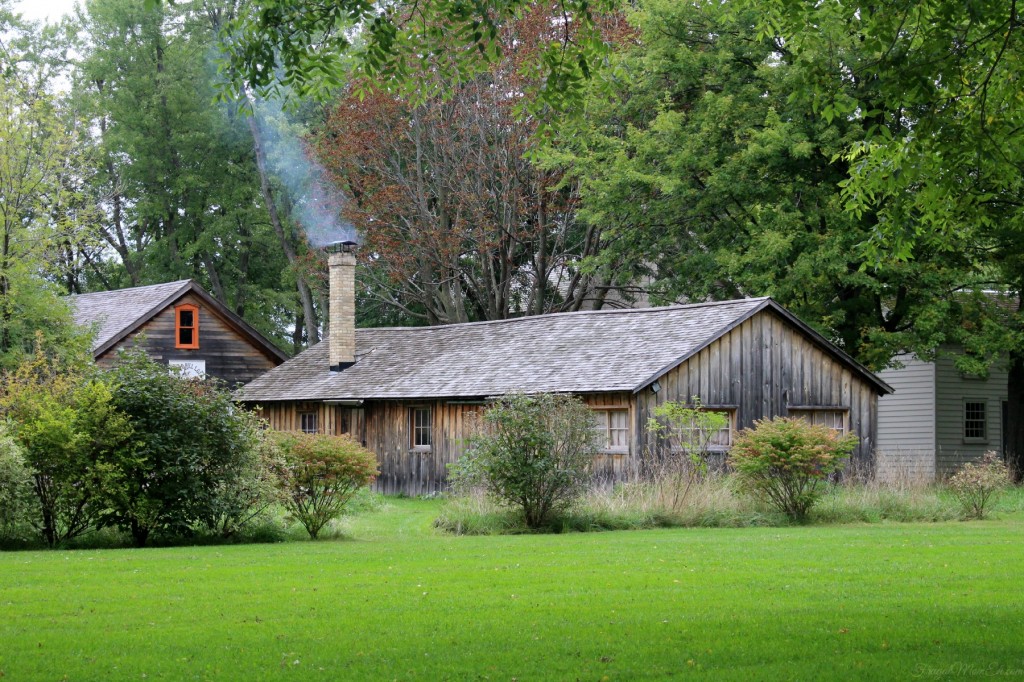 One of the many buildings you can explore is the village’s blacksmith shop which is a working reproduction, designed by Park Superintendent Rex H. Bishop, and constructed in 1958 by the Upper Thames River Conservation Authority.   You will find a historical interpreter on site happy to demonstrate how a smithy worked his trade during the 19th century with plenty of examples of what would have been produced at the time.  The Blacksmith shop is also used to fabricate metal pieces for maintenance around the village as needed. 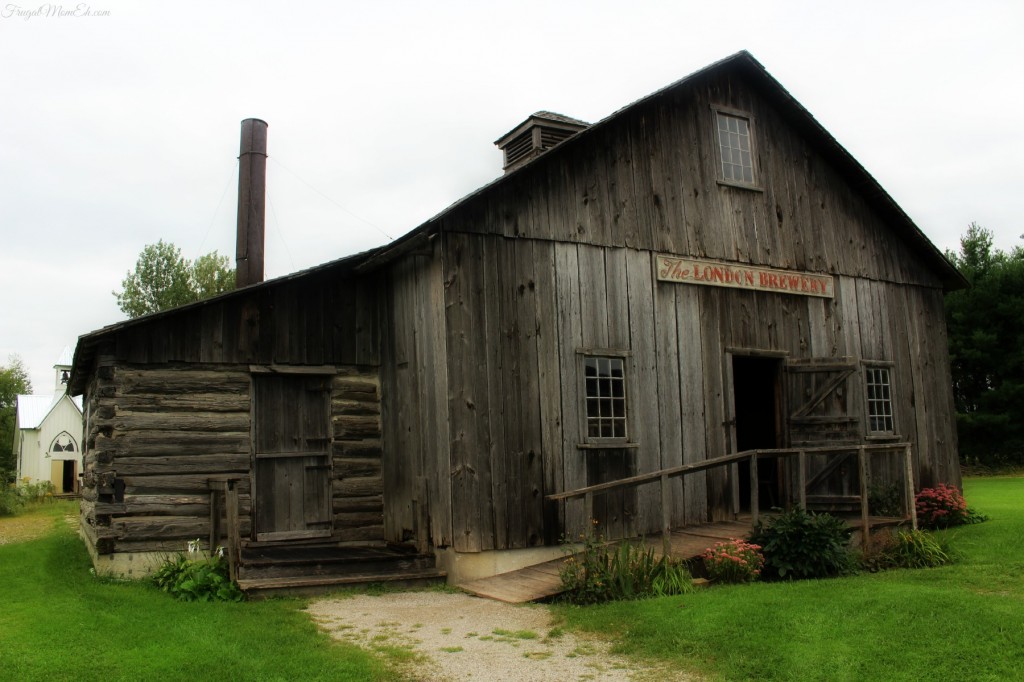 The history of Labatt’s Breweries is unequivocally linked with the history of London.  The two have shared a long and prosperous relationship that dates back to 1828, when John Balkwill first opened his London Brewery on Simcoe Street.  The London Brewery, as it was called, produced 400 barrels of beer a year, and much of it was sold through Balkwill’s own tavern.  In 1847, Samuel Eccles purchased the operation from Balkwill and his brother-in-law, George Snell.  Eccles later partnered with his friend John Kinder Labatt, an Irish immigrant who had returned to England to study the craft of the brewmaster. 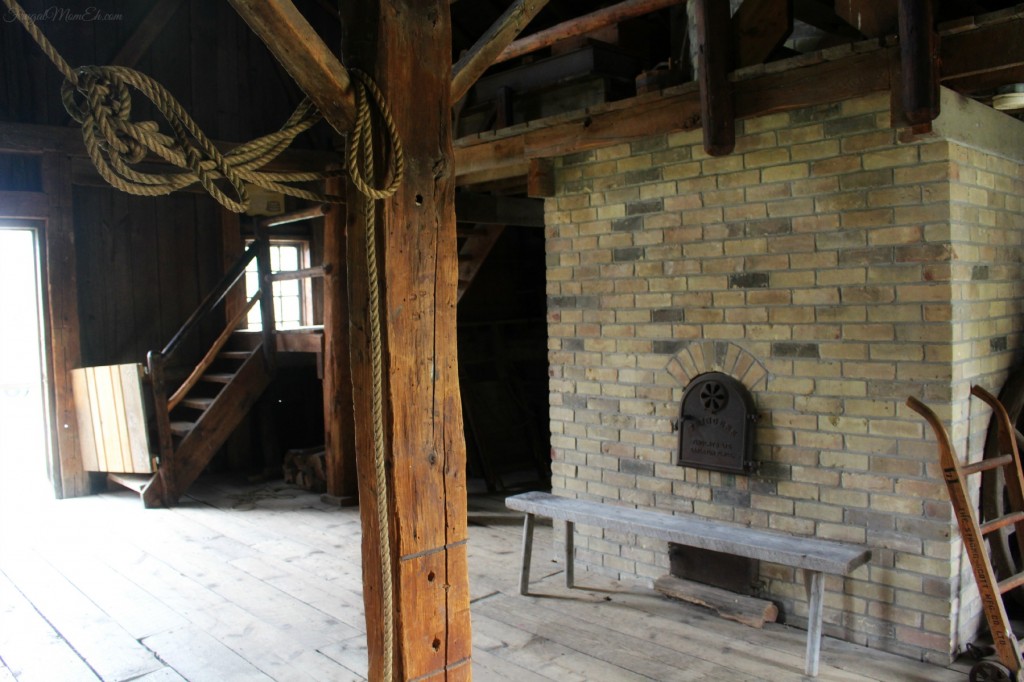 The London Brewery in Fanshawe Pioneer Village is a replica of the original brewery.  When we visited there were no historical interpreters but we were able to freely look around the brewery and with the help of information posted outside we got a good idea about the history behind the Original brewery. 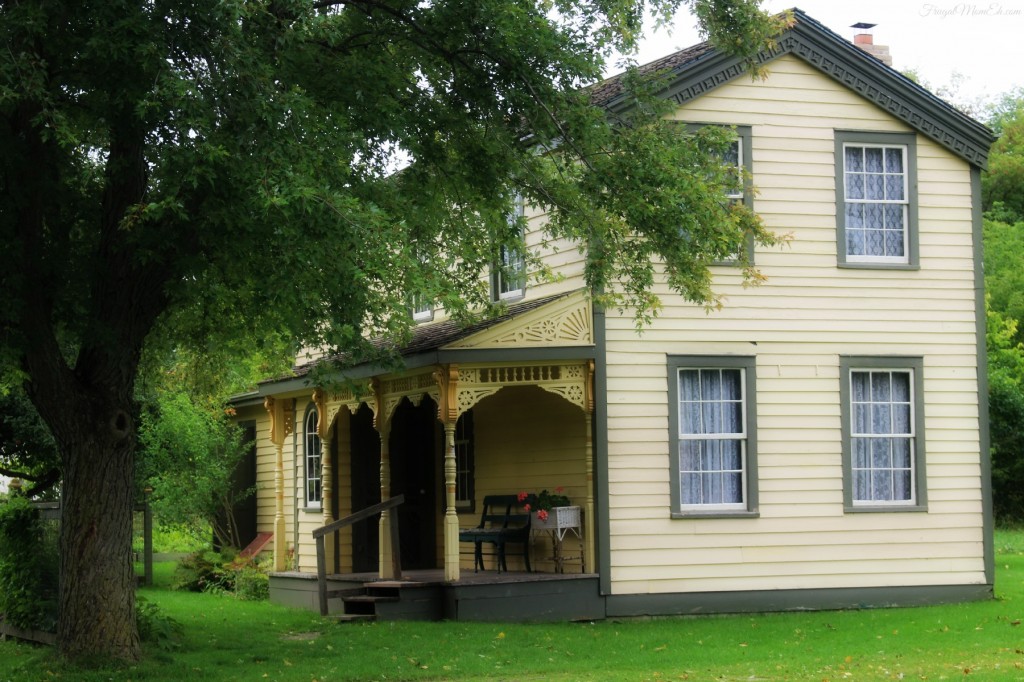 Paul Peel (1860-1892), the London-born and world-renowned artist, lived in this home during his childhood.  The house was originally located at 230 Richmond Street, south of Horton Street.  Paul’s parents, John and Amelia Peel, bought the house in 1865, when Paul was five years old. The family resided at this house for approximately two and a half years. In 1868, the Peel family moved to a house at 167 Oxford Street where Paul lived for the remainder of his adolescent years. 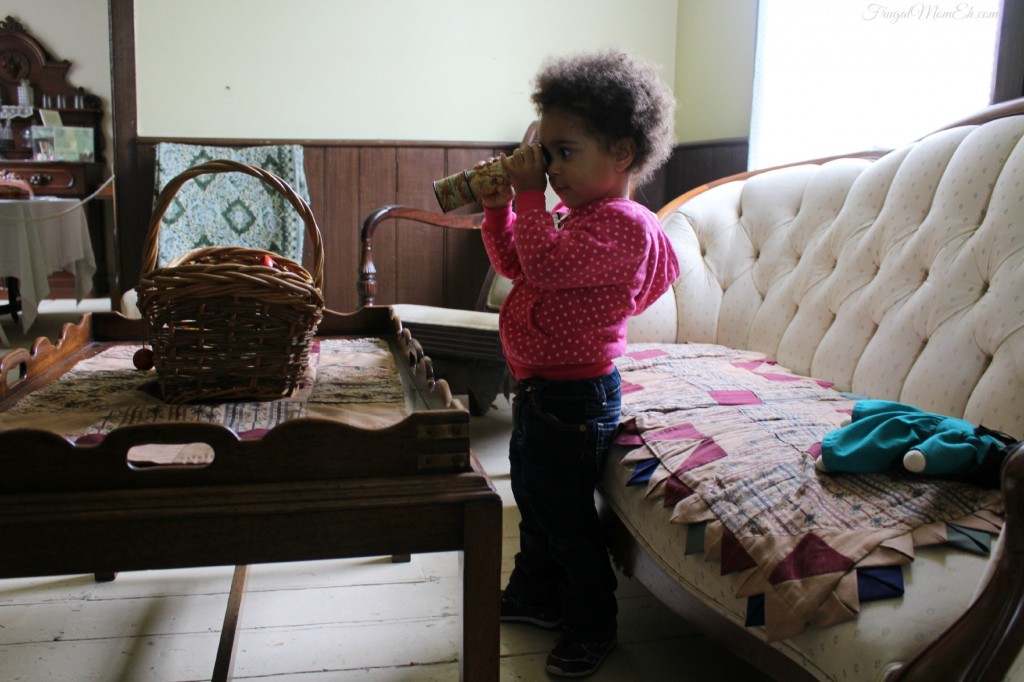 Inside the Peel home we found another costumed interpreter who explained the history of the home to us.  It was also an opportunity for Keira to play with replica’s of toys that would have been available at the time.  While most of the buildings follow a look but don’t touch rule, at times the interpreters will invite you to a hands on experience such as this.

Upstairs there is also a bedroom setup with real toys from the 19th century; set up as if a child had just been playing with them. 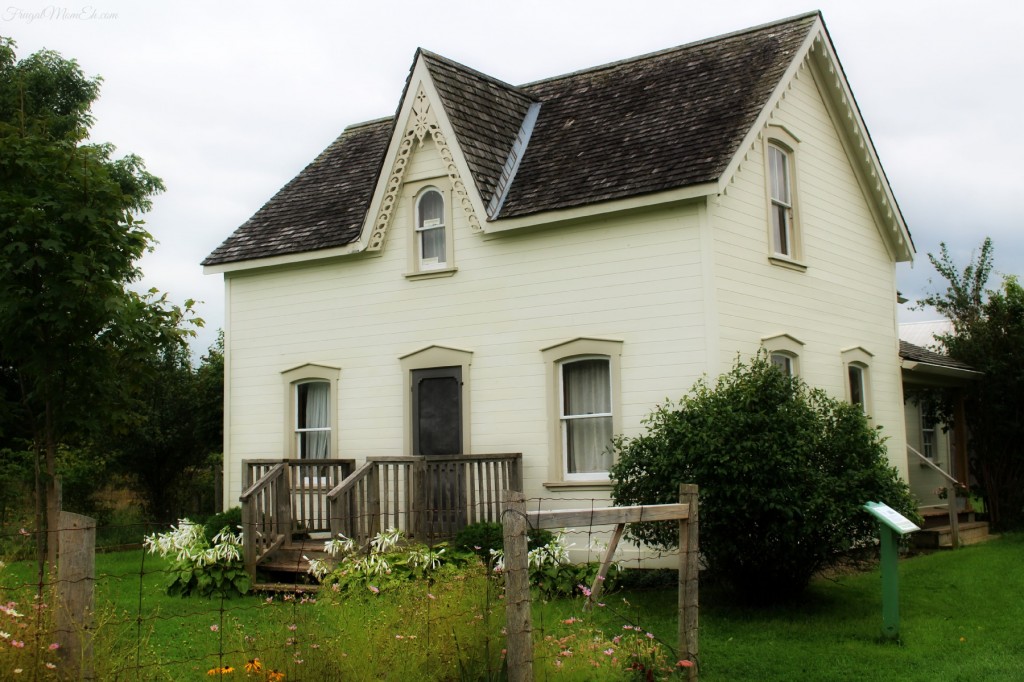 Boyhood home of Wilfrid Jury, the founder of Fanshawe Pioneer Village.  It is an excellent 1888 example of a typical Ontario farmhouse.

The Jury house was built on Lot 12 Concession 2 of Lobo Township and is the childhood home of Wilfrid Jury, the founding curator of Fanshawe Pioneer Village. William Jury Jr., built this home in 1888 for his son Amos on the occasion of his marriage to Charlotte Julia “Jewel” Alder, the daughter of the weaver Thomas Alder. The house was occupied by the Jury family until Amos’ death in 1964. The farmhouse was rented to various tenants before it was sold in 1968 to Murray Manson. When Manson donated the house to Fanshawe Pioneer Village in 1973, the building had to be cut in two with a chain saw and the roof removed in order to transport it. 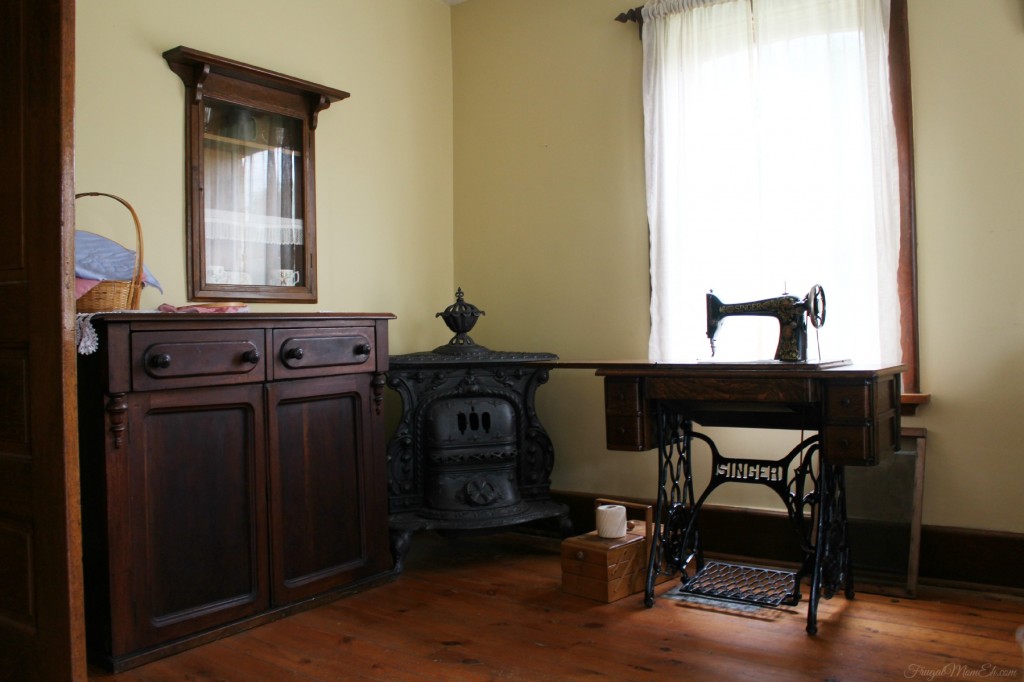 This house was pretty interesting as the furnishings belonged with the home and it was returned to how it would have looked under the guidance of Wilfrid Jury.

I was also intrigued by the fact that one of the bedrooms had a window out over the stairwell with a view of the other two bedrooms.  I found out after asking the historical interpreter in the home that the bedroom was part of a later addition and at the time they would not have been able to fill in the window to instead it was just left. 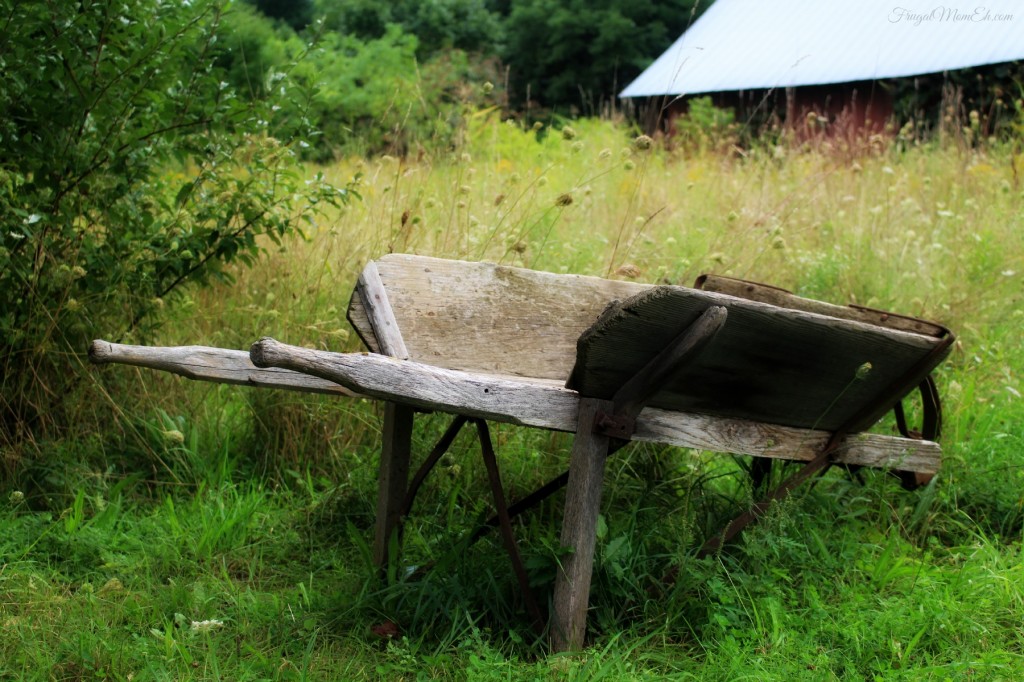 The village also offers a look into farming life in the 19th century with plenty of farm equipment and barns located in the village. 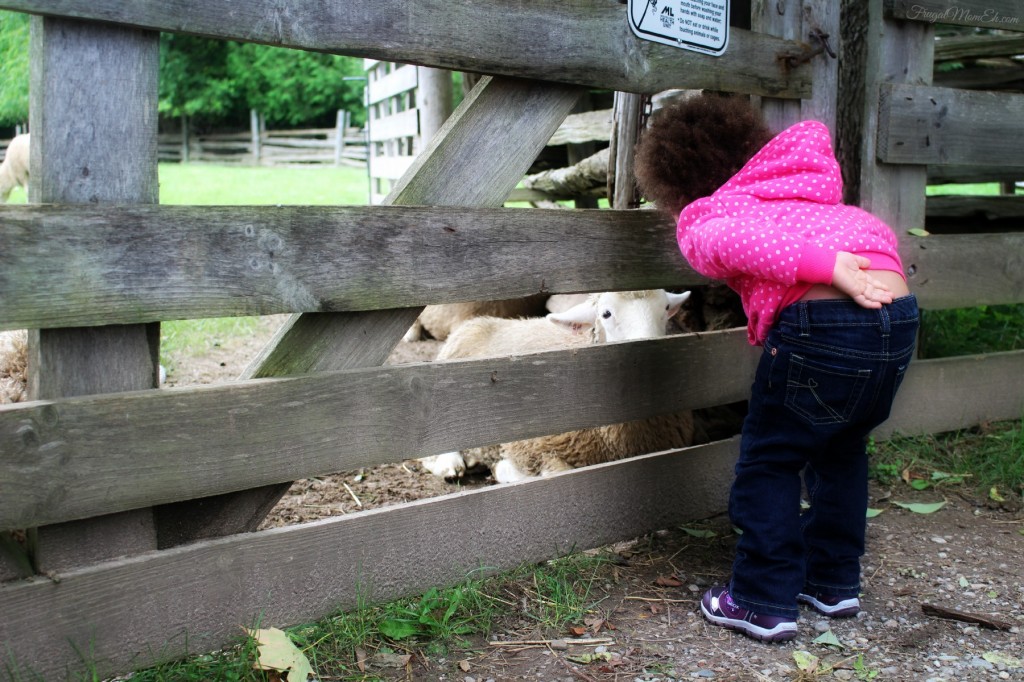 Keira loved seeing the animals and was talking for the rest of the day about the Sheep, Piggy and Ducks that she saw. 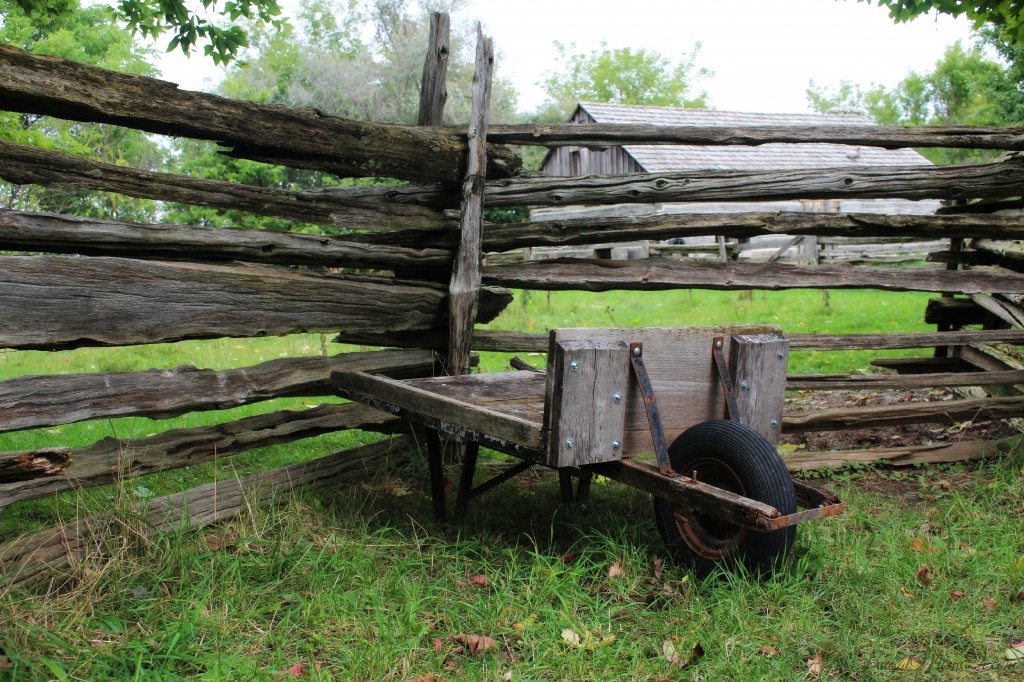 Of course the village also offers many opportunities for really cool photographs.  I’d love to go back when the girls are a bit older so I can attempt some photography without having my arm tugged at. 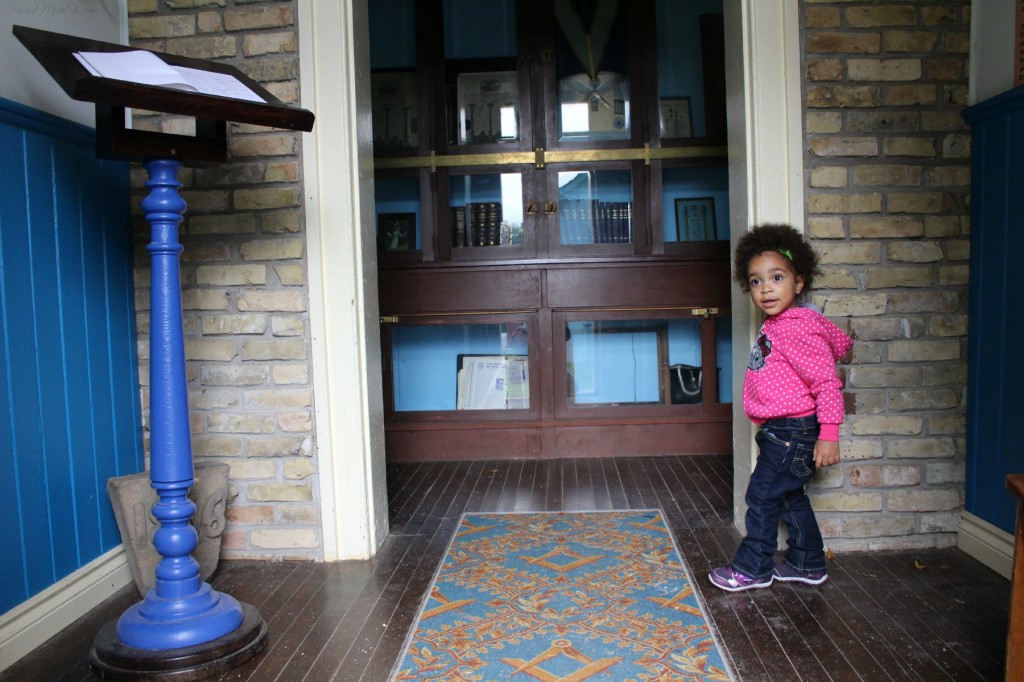 My husband was really intrigued by the Mount Moriah Masonic Lodge.

This structure, which is currently interpreted as a Masonic Lodge, was once the Pond Mills School, formally known as School Section #7. The school was originally located in the village of Pond Mills, Westminster Township, which is now a subdivision in south east London. S.S. #7 was in existence from 1825 -1966 and began as a one-room schoolhouse on land which is now part of Pond Mills Cemetery. In 1844, the original log structure was replaced with a wooden frame building. In 1860, the one-room brick structure, the building now at the Village, was built on an adjacent lot. 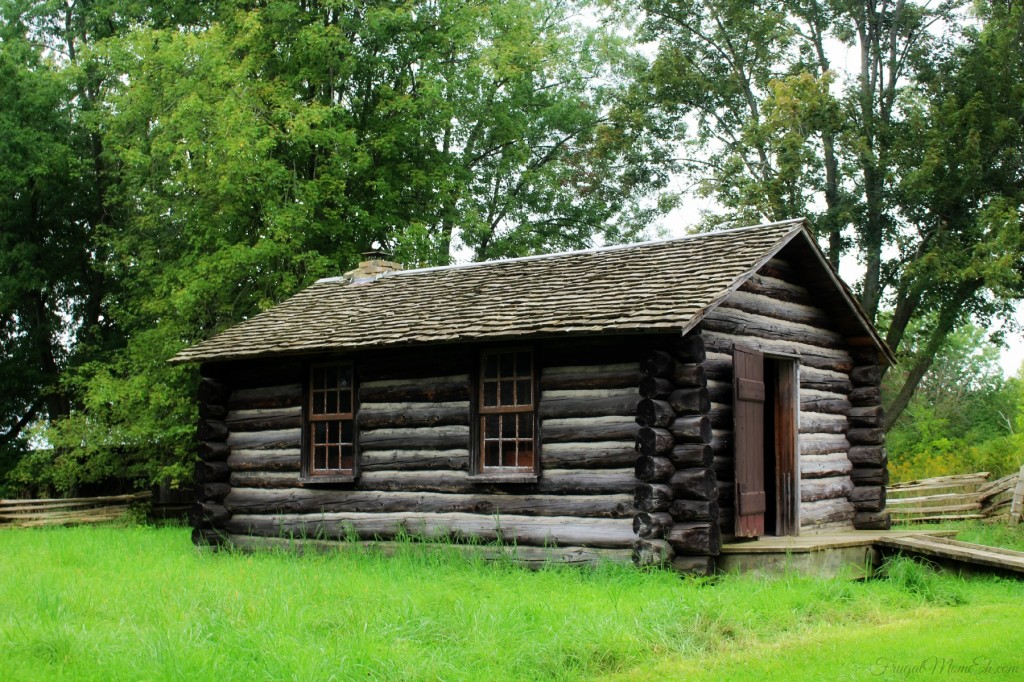 This building is reminiscent of the first log schools built by Talbot settlers for the children on their concession after homes were established. Circa 1830s.

Fanshawe Pioneer Village’s Log School is a replica building, constructed by a “Students Working on Environmental Enhancement Projects” (SWEEP) crew in 1974. The school was originally built beside Lochaber Church, on what is now Concession I of Fanshawe Pioneer Village. The building was later relocated to Orchard Road, and then moved once again in 2006 to its present location on Concession I. 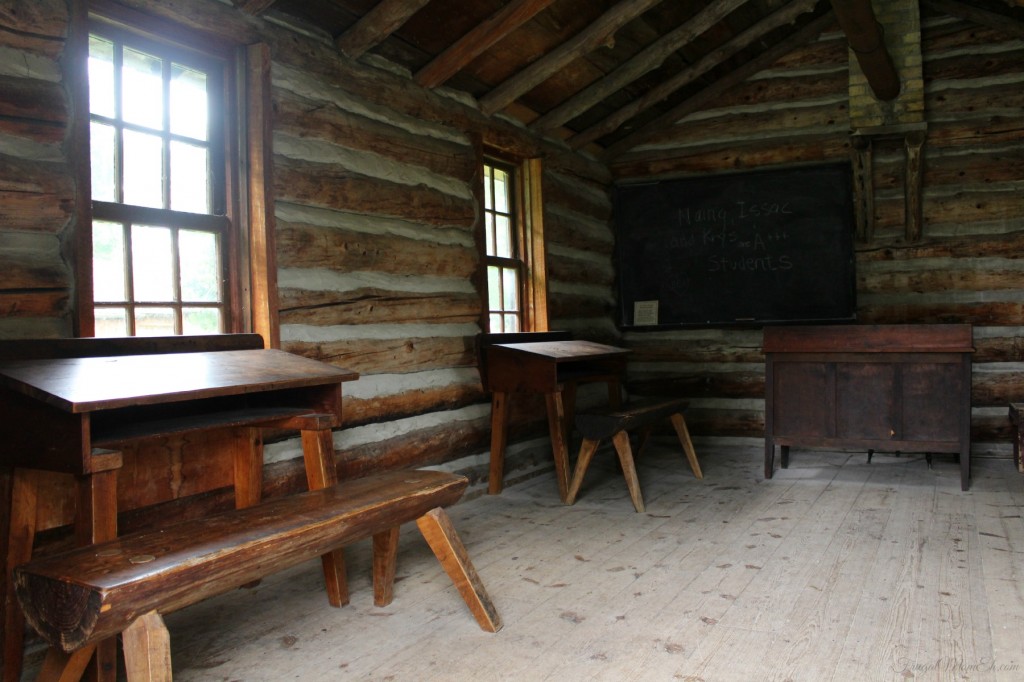 Can you imagine going to a school like this?  Things certainly have changed and quickly! 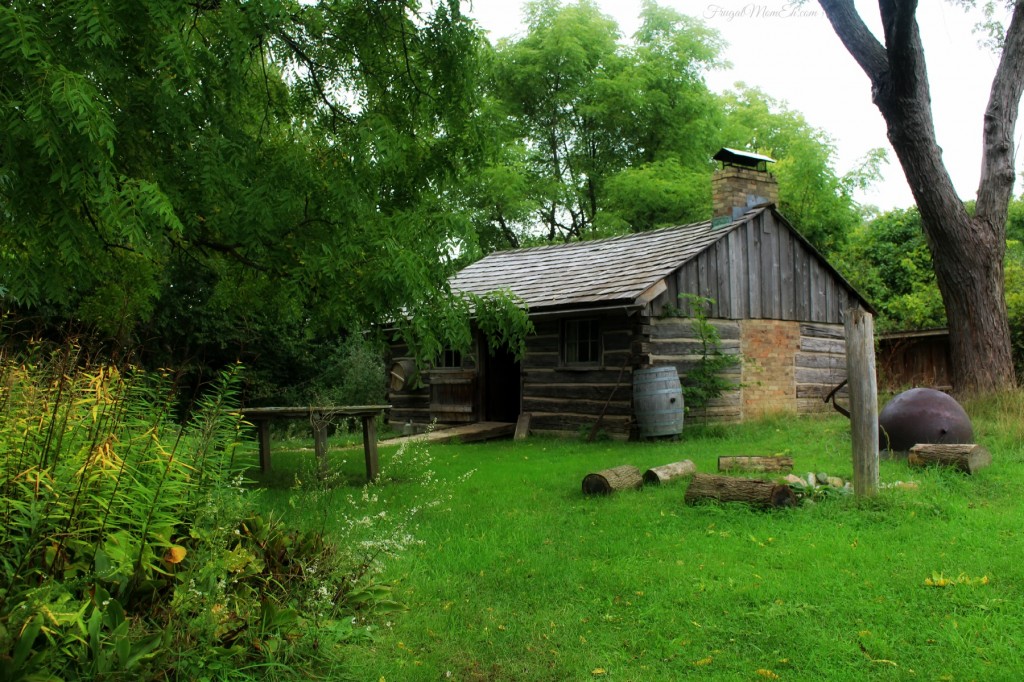 The Elgie Log House was built about 1865 on Lot 24, Concession 7, West Nissouri Township. This building was the boyhood home of Michael Elgie. Elgie’s father, James, moved to West Nissouri Township around 1877 where he purchased the log home and farm. The log house was originally built as a one and a half storey structure typical of the period, but was reconstructed as a single storey dwelling when it was moved to the Village.

The Elgie Log House was certainly interesting and I challenge you to visit it and not feel grateful for the type of life we are all accustomed to thanks to modern conveniences.n  I can’t even begin to image how miserably cold a winter spent in this house would be. 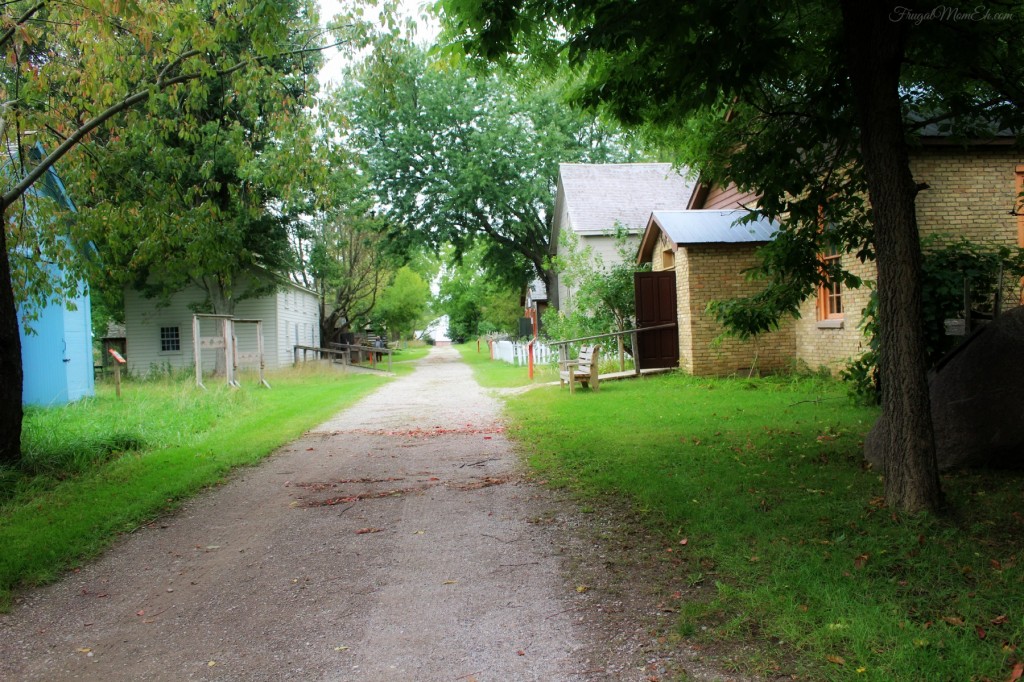 I bet the grandkids would love visiting here

I love these historical sites where they actually have people in the original dress of the day. It was certainly a much tougher life in those days that's for sure.

I remember going here when decades ago -- it was lots of fun!

Wow I love the vintage beauty. I'd totally live there.

This looks like a whole lot of fun was had! We live near to Heritage Park, love it.