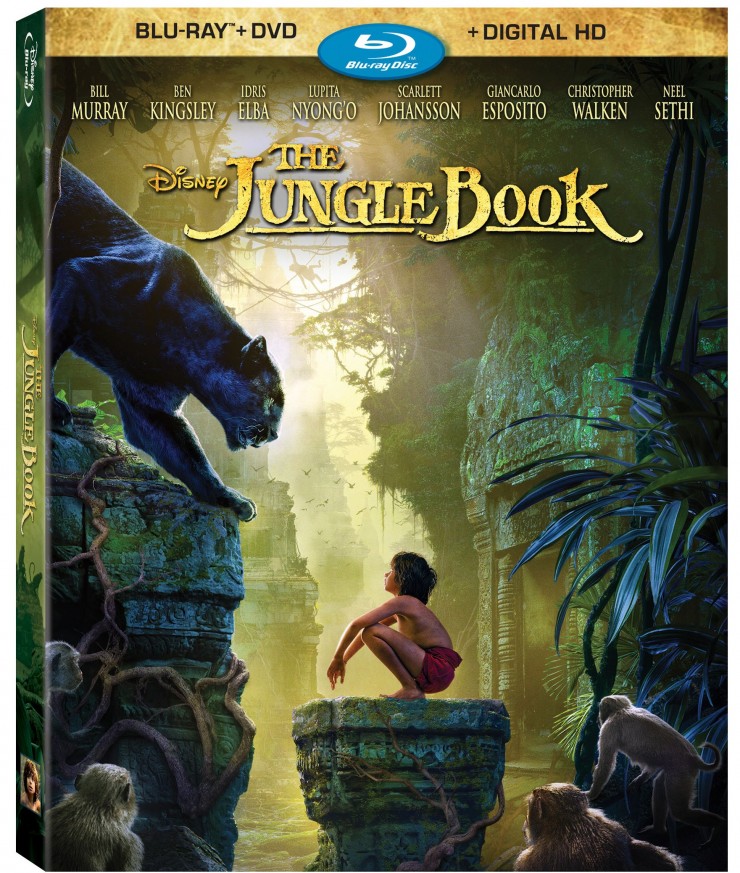 Venture behind the scenes with in-depth bonus features that reveal the innovative filmmaking technology used to create the richly immersive jungle world and characters; Follow the journey of the film’s only on-screen actor, charismatic newcomer Neel Sethi (Mowgli); Delve into a candid and humorous scene-by-scene audio commentary with director Jon Favreau and meet the all-star voice cast who help bring the film’s colourful characters to life, as well as the musicians who accent the adventure with a majestic music score.

The all-star cast includes Bill Murray (“Lost in Translation”) as the voice of Baloo, Sir Ben Kingsley (“Learning to Drive,” “The Walk”) as Bagheera and Lupita Nyong’o (“12 Years a Slave,” “Star Wars: The Force Awakens”) as the voice of mother wolf Raksha. Scarlett Johansson (“Avengers: Age of Ultron”) gives life to Kaa, Giancarlo Esposito (“Breaking Bad”) provides the voice of alpha-male wolf Akela, Idris Elba (“Beast of No Nation”) roars as the voice of Shere Khan, and Christopher Walken (“The Deer Hunter”) lends his iconic voice to King Louie.

“The Jungle Book” is a live-action epic adventure based on Rudyard Kipling’s timeless stories, inspired by Disney’s classic 1967 animated film and centered on Mowgli , a man-cub who’s been raised by a family of wolves. But Mowgli finds he is no longer welcome in the jungle when fearsome tiger Shere Khan, who bears the scars of Man, promises to eliminate what he sees as a threat.

The film’s musical score, composed by Emmy® winner and Oscar-, BAFTA- and Annie Award-nominee John Debney (“Elf,” “Iron Man 2”), features a classic orchestral sound accented by ethnic instruments and pays homage to the original film by highlighting snippets of the classic songs we all know and love.

Note: The 3D version of The Jungle Book will be available later this year.

Favreau sits down with producer Brigham Taylor and visual effects supervisor Robert Legato to discuss “The Jungle Book” and reflect on the years they devoted to the reimagining of this timeless tale. Discover how Rudyard Kipling’s original stories and the classic animated film influenced their unique approach, witness the technical wizardry that enabled the team to create a believable and thrilling movie-going experience, and learn how they borrowed a page from Walt Disney’s innovation playbook to make it all happen. Lastly, meet the all-star voice cast who help bring the film’s colorful characters to life, as well as the musicians who accent the adventure with a majestic music score.
I Am Mowgli

Follow the extraordinary journey of 12-year-old Neel Sethi, who was selected from thousands of hopefuls worldwide to play Mowgli “alongside” some of today’s biggest movie stars. Get a glimpse of Neel’s life before Hollywood came calling, check out his audition that sealed the deal, and see how a close-working relationship with Favreau brought out his best. Plus, Neel shares how filming “The Jungle Book” was one wild ride, from working alongside imaginary animals to performing some super-fun stunts.

So, exactly how do you create a musical number featuring one man-cub, a massive, legendary ape and an army of wild and wily monkeys in the Seeonee jungle? Viewers are granted rare and unique access to the development of the “I Wan’na Be Like You” sequence in which King Louie attempts to coerce Mowgli into giving up Man’s deadly “red flower” (fire). A fast-moving musical progression reel showcases storyboards, animatics, Christopher Walken’s recording session and visual effects layers, which ultimately merge to form one of the film’s most memorable scenes.
Audio Commentary – Favreau delivers his scene-by-scene perspective on the live-action adventure “The Jungle Book” with all the candor and humor you’d expect from this multi-talented actor-writer-director-producer.

Grab some downloadable activities for kids:

…and some fun animal facts too:

This was one amazing movie,i loved the first one and thought it could not be better but man was i was wrong....i cant wait to watch it again

I haven't seen it yet. I've only heard good things. I'm going to see it soon.

I still have to see this movie, looks super awesome!!

Love this movie. Will have to pick up a copy to have.