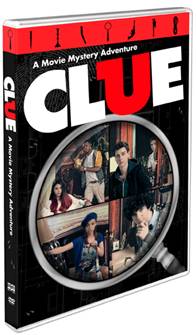 Six very different teenagers – Dimitri, Liz, Lucas, Agnes, Seamus and Whitney – are all enjoying their everyday lives when they witness a dramatic incident. Unfairly accused of creating a hoax, they team up to find out the truth.  On July 15th, 2014, Shout! Factory Kids, in collaboration with Hasbro Studios, will unleash the family mystery adventure Clue: A Movie Mystery Adventure on DVD.  Join the young sleuths as they work together discovering and deciphering a succession of clues.

Clue: A Movie Mystery Adventure features the beloved characters inspired by the world’s most famous crime-solving board game, Clue. Follow six very different young sleuths as they embark on a mysterious adventure beyond their imaginations. As they work as a team to discover hidden treasures, decipher cryptic knowledge, and uncover a secret society, they learn they have more in common than they thought.

To start, I would say that this movie is targeted towards tweens or early teens but is watchable for the entire family.   As an adult, I did enjoy watching it but it isn’t something I would purposely pick up to watch again by myself.  However, I know that if I were younger this would be a top pick as I was kept interested in the plot from start to finish!

Aside from being a fun mystery and adventure movie, there are valuable lessons to be learned about teamwork and bullying.

This movie is rated PG and runs for 1 hour and 45 minutes.

I use to play the board game many years ago, this would be fun to watch

A who done it, teen style

A mystery movie, one that I have not seen in a while

Cant wait to see the movie

This sounds like a fun movie -- we love mysteries!