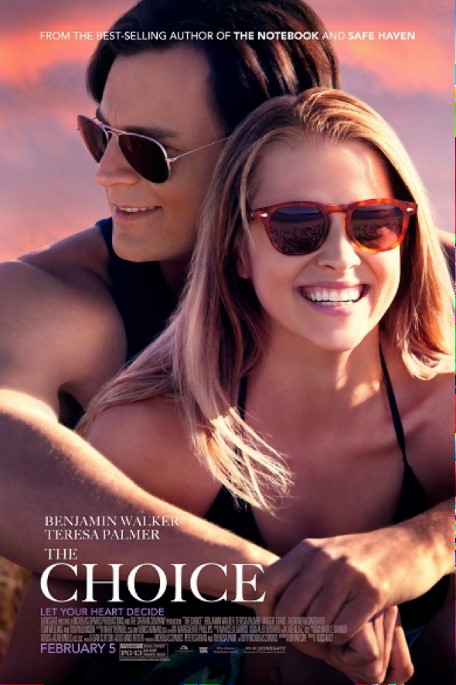 From novelist Nicholas Sparks, the author of classic love stories The Notebook and Dear John, the year’s most moving romance, The Choice, will be available on Digital HD April 19 and on Blu-ray™ (plus Digital HD) and DVD (plus Digital) on May 3 from Lionsgate. Based on Sparks’ best-selling novel, written for the screen by Bryan Sipe (Demolition), and directed by Ross Katz (Adult Beginners), The Choice stars Benjamin Walker (Abraham Lincoln: Vampire Hunter), Teresa Palmer (Warm Bodies), Maggie Grace (Taken series), Alexandra Daddario (San Andreas), Tom Welling (TV’s “Smallville”) and Academy Award® nominee Tom Wilkinson (Best Actor, In the Bedroom, 2001), in a touching love story that will make viewers laugh, cry, and wonder how far they would go to keep the hope of love alive.

Travis is a fun-loving, smooth-talking bachelor who’s never considered a serious relationship—until he falls hard for his beautiful new neighbor, Gabby. But when fate threatens Travis and Gabby’s love, Travis must make a choice that will alter their lives forever in this unforgettably moving romance.

I really wanted to like this movie. I really did. I loved The Notebook and Dear John and I at least liked the 8 other Nicholas Sparks movies – even if they are somewhat formulaic. Unfortunately this one never escaped the constraints of the formula and with little else working for it, I found myself grateful for the credits. The acting was disconnected, the lead characters lacked chemistry between them and you could see the crisis and denouement from a mile away. Don’t even get me started on the checklist of romantic movie tropes it hit along the way.

To be fair, it wasn’t all bad. I did find myself laughing a couple times in the first half of the movie. So there is that. I guess.

I'm not really a fan of love stories but this sounds as if it's intriguing.

I am actually looking forward to seeing this one