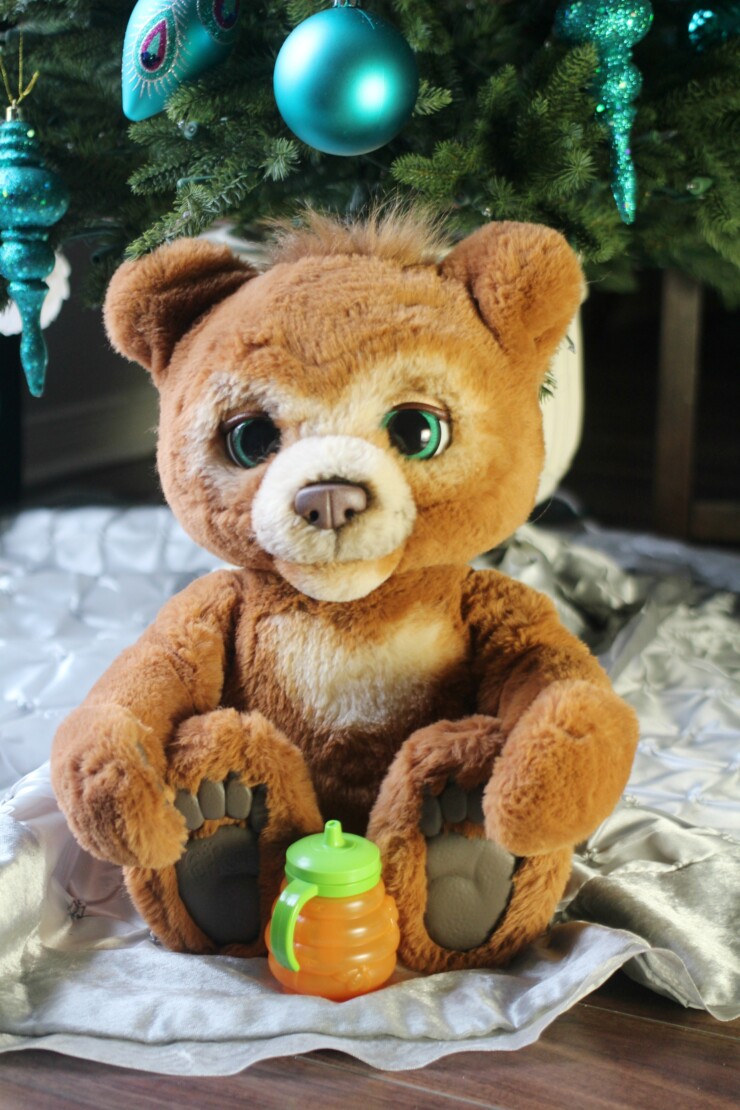 My kids adore their Teddy Bears. They each have a favourite one who comes down with them for breakfast and seems to follow them around everwhere around the house right up until bedtime when they snuggle in under their sheets with their little buddies.

As you can imagine, it wasn’t much of a surprise when they first saw furReal Cubby, the Curious Bear Interactive Plush Toy, they each immediately put it on their Christmas wish lists. When Hasbro agreed to send one for us to review, I knew they would absolutely lose their collective minds. Sure enough, when Cubby arrived and they got home from school to find it waiting they were just beyond excited. Just like Christmas morning!

furReal Cubby is an interactive plush bear toy who is ready to take part in all your kids adventures, and then snuggle next to them at the end of the day.

He has super soft fur, large bright blue eyes, the cutest little bear face and is overall very realistic looking in both design and movement. He does react to the way you touch him and talk to him, he has over one hundred sound and motion combinations. He can sing songs, play peek-a-boo, “eat” a snack or “drink” from his cup, and more. He can move his head, eyes, ears, nose, mouth, and arms, and makes lots of fun sounds including babbling, eating, laughing, and snoring (when put into sleep mode.) Cubby can sit or stand, but it has to be done manually. He doesn’t do it on his own, and he does not walk.

Interactive animals like this, especially bears, usually tend to have a high creep factor for adults, but not Cubby! He is just so sweet looking and sounding with minimal “mechanical” sounds, plus once in sleep mode he doesn’t make random loud noises at night. His babbling is super sweet too, and doesn’t really get annoying to listen to the way many “talking” toys do.

The girls love feeding him his bottle or treat – the eating sounds are super fun! Then they like to carefully comb his fur with the brush part of the bottle accessory.

When playtime is over and it is time for bed, Cubby can be put into nighttime mode which causes him to close his sweet eyes, make sleepy sounds and then plays ambient/white noise nature sounds for 5-minute before shutting off until reactivated.

Cubby does have a hard body, it isn’t soft like a normal teddy bear so he isn’t squishy but the girls still love to snuggle next to him because he is so soft and just perfect for falling asleep with. They also love the “music” he plays as they fall asleep.

I do find, as one complaint, that although he does have the ability to respond with over 100 different combinations, he does seem to heavily favour playing peek-a-boo. Not a problem if your little one loves peek-a-boo too, and so far no complaints from my kids. In fact, they simply adore Cubby who has now joined their Teddy Bears in being dragged around everywhere throughout their day!

I definitely recommend Cubby – he makes an unforgettable gift for any child who loves cuddly bears and is sure to be found on many wish lists this holiday season. Purchase from Amazon for only $115.89 CAD.

Disclosure: I received the above mentioned product in order to facilitate this review. All thoughts and opinions are honest and my own.