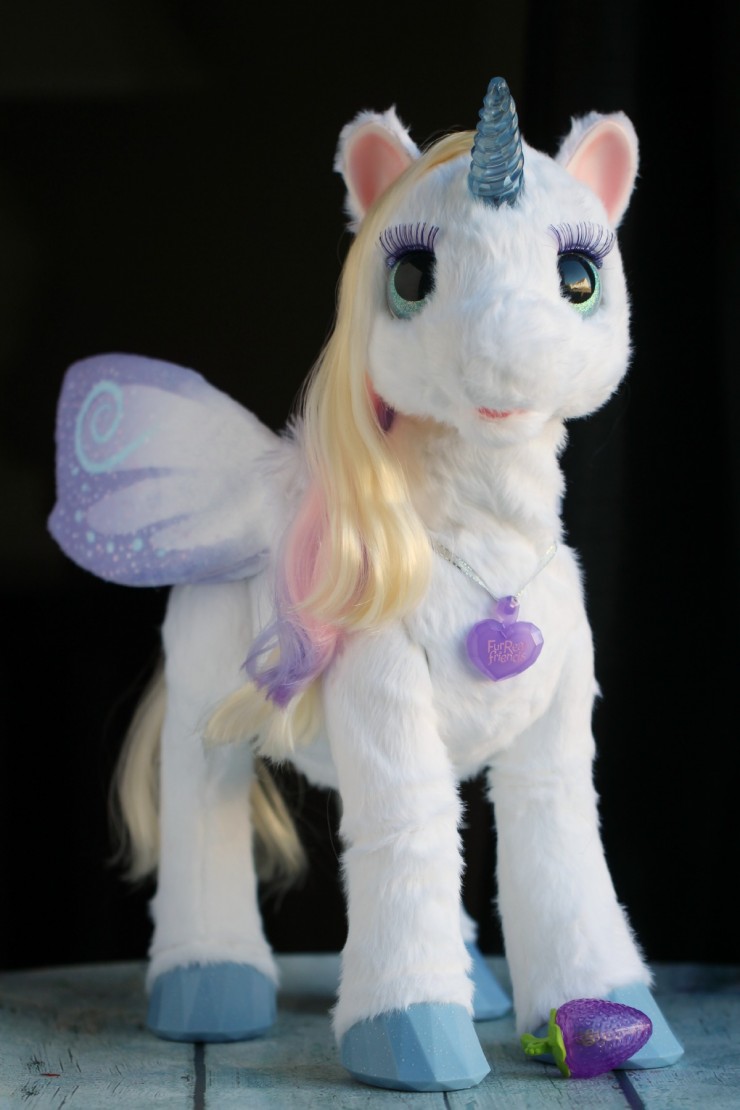 My childhood best friend and I were literally obsessed with unicorns.  We spent a lot of time drawing unicorns, playing with our favourite My Little Ponies – always the unicorns and watching The Last Unicorn, over and over.

It’s pretty safe to say I would have gone crazy for the latest addition to the FurReal Friends line-up – StarLily: My Magical Unicorn Pet.  I think it goes without saying that this is one toy that is going to be on many lists to Santa this year!  StarLily is basically a dream come true for any child who loves unicorns. 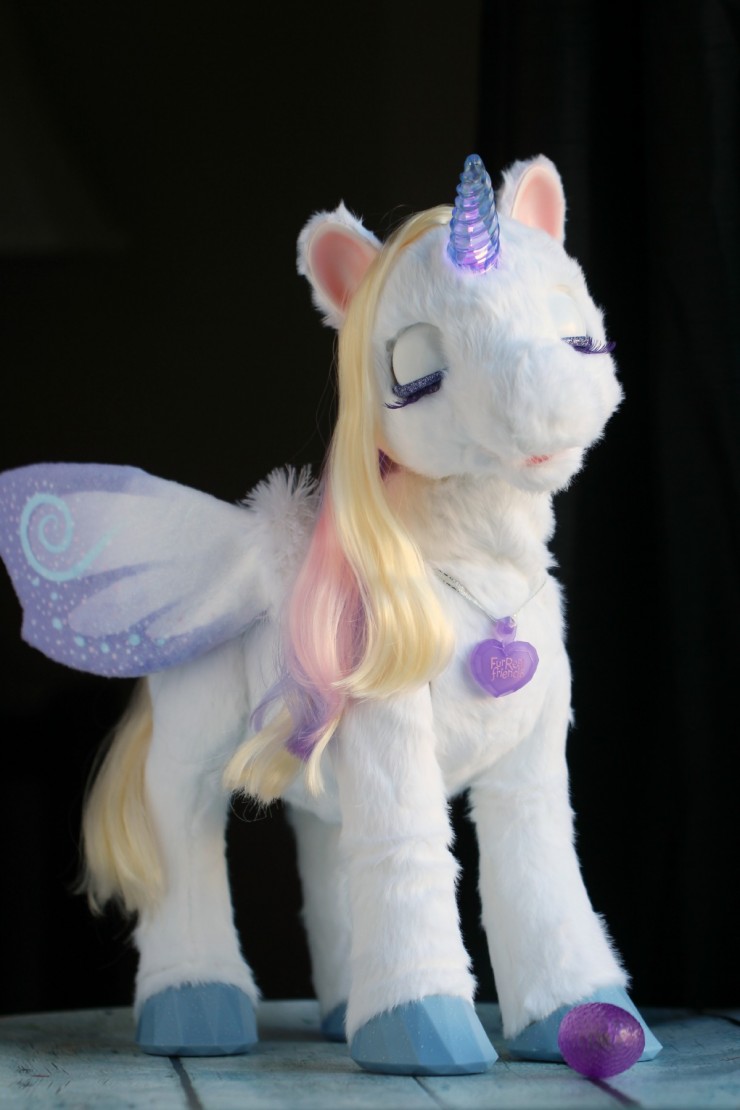 I will start with the stuff that was “meh” as the list is very short.  StarLily requires 4 “C” batteries that are not included.  She does fall asleep pretty quickly which definitely saves on battery life and she wakes up easily either by touch or the wake-up button on her back.

She also does not walk which confused Keira, 3, as she also has the Walking Go-go Puppy.  That said, once she got over the confusion, it did not impact her enjoyment of StarLily as she just does so much other stuff. 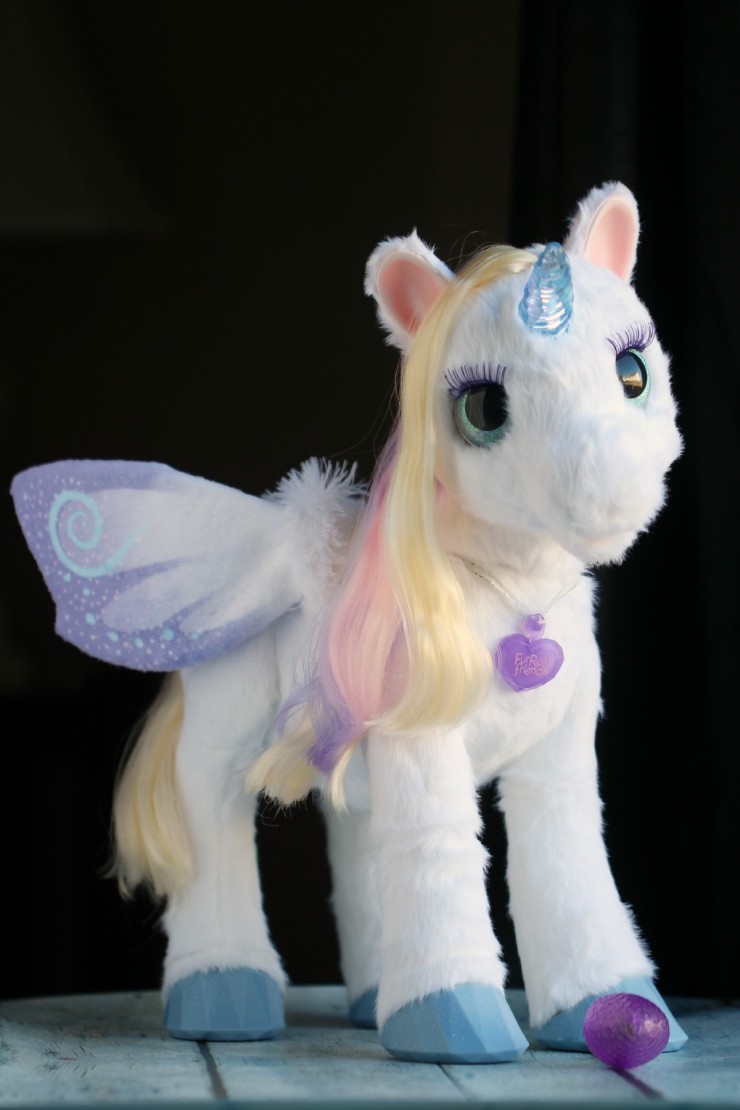 The good – she is a unicorn with a horn that lights up in different colours depending on her mood.  She responds to sound and touch motion and sound and she is capable of over 100 combinations of responses.  She is poseable – you can have her stand, sit or lay down.  She is also able to lift one leg, move her head up, down and around plus she is able to flutter her sparkly wings.  Her eyes feature gorgeous long eyelashes and she is able to blink!  StarLily’s fur is very soft and her hair is long and brushable – Keira loves to practice hair styling on StarLily.  All-in-all she is one beautiful, and endearing, toy! 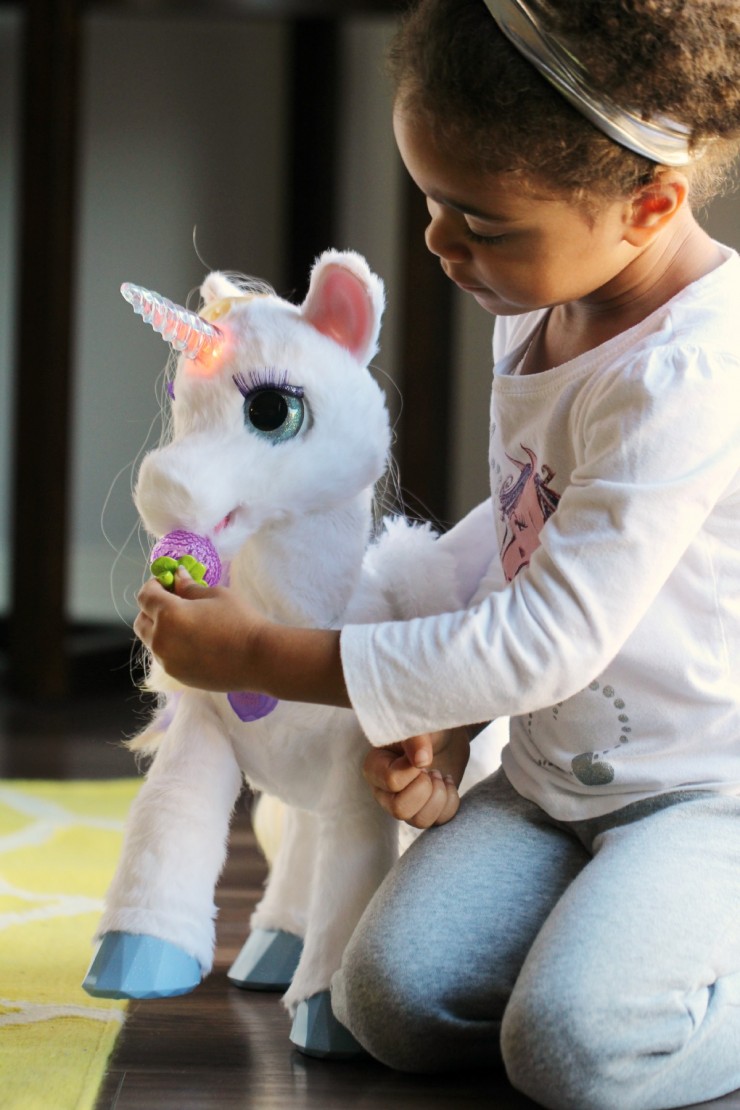 She comes with a Sugarberry treat for feeding, and when fed StarLily responds by making crunching noises.  Most of the sounds we have heard so far  are the crunching noises, “mmMMmm”, humming, music and neighing.  She seems to respond by nuzzling and cooing or sighing when you touch her face. 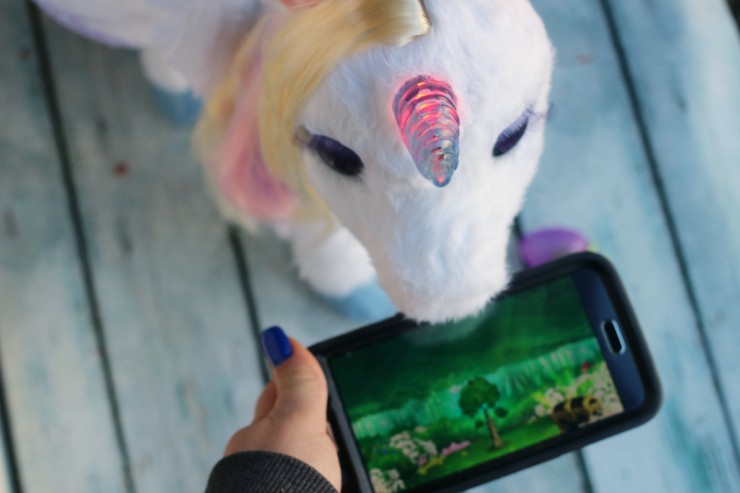 There is also a free StarLily app available in the GooglePlay Store and Apple Store.  The app features several games and activities for little ones to play with StarLily that helps to increase her “powers” which in turn gets her to respond in new ways.  One of the apps lets you grow fruit that StarLily “eats”, showing immediate appreciation of the treats.  The games are progressive so as you explore through them you unlock mores games and adventures to take StarLily on.

StarLily is recommended for ages 4 and up.  That said while Keira definitely knows how to play properly with StarLily, my almost 2 year old loves to play with her too.  She adores feeding her, gently petting her and of course all the reactions she gets from playing with her. 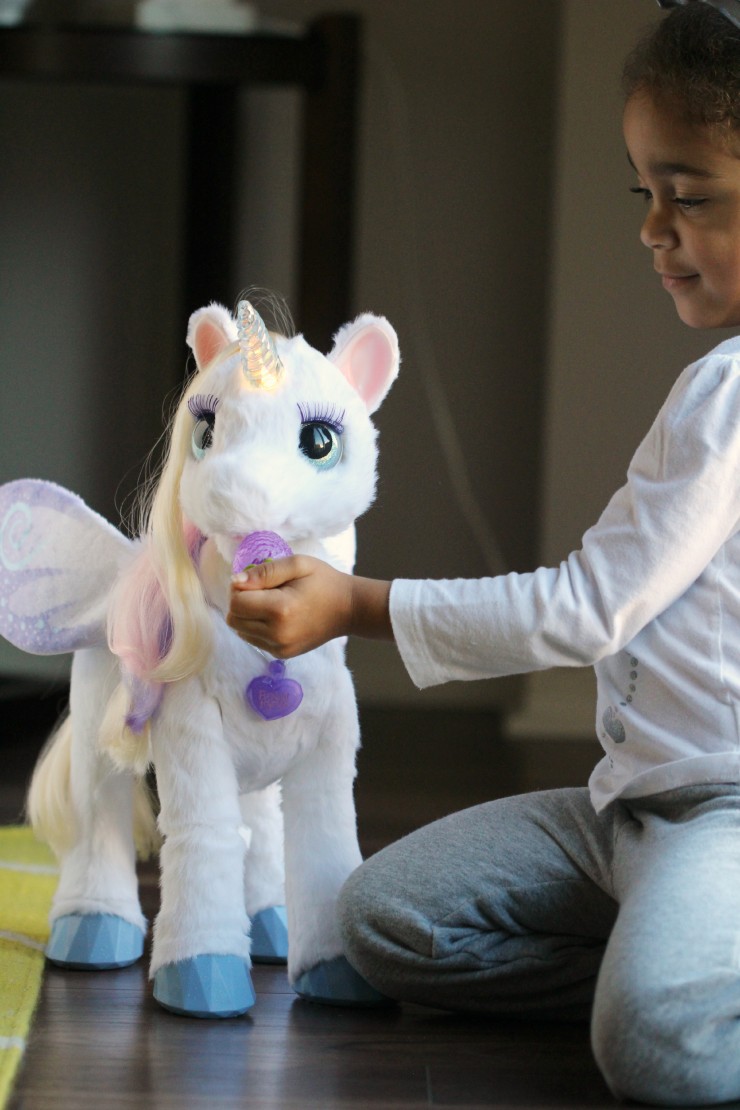 StarLily is definitely more costly than other FurReal friends but she is also the highest quality from the line-up that we have seen.  I do think she is absolutely worth every penny based on all the hours of interactive play she has seen so far.   She is definitely a great option if you are looking for a way to introduce a little magic into your child’s life – and she is sure to impress!

You can purchase StarLily online from Amazon, Sears, Walmart and Toys ‘R Us and she can also be found at a store near you. 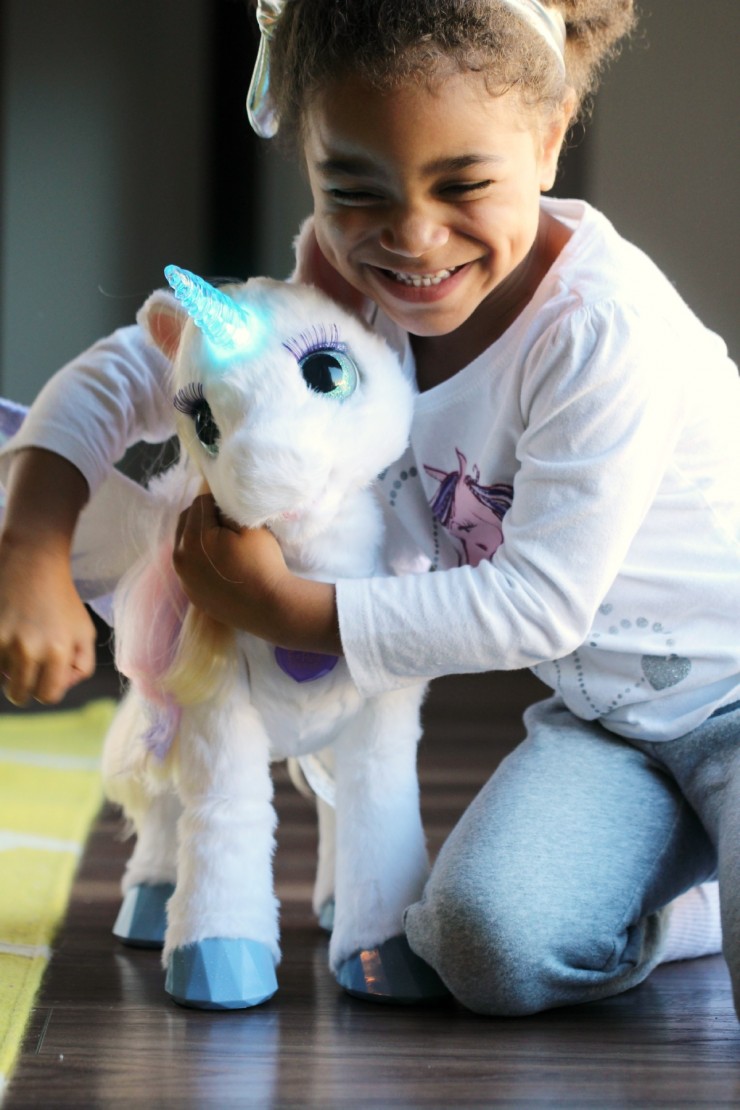 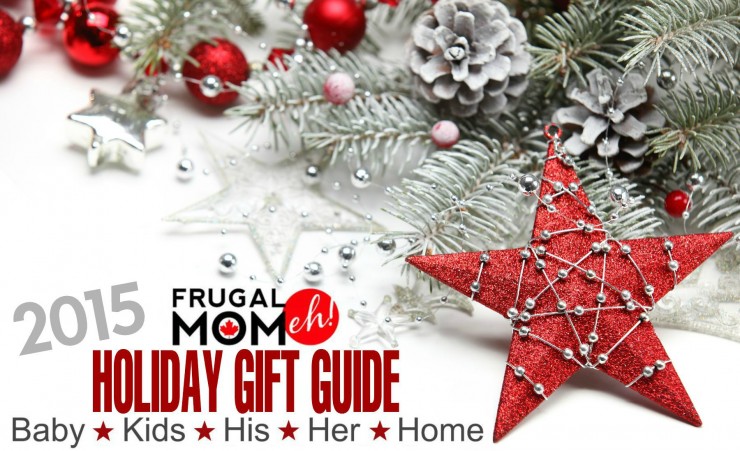