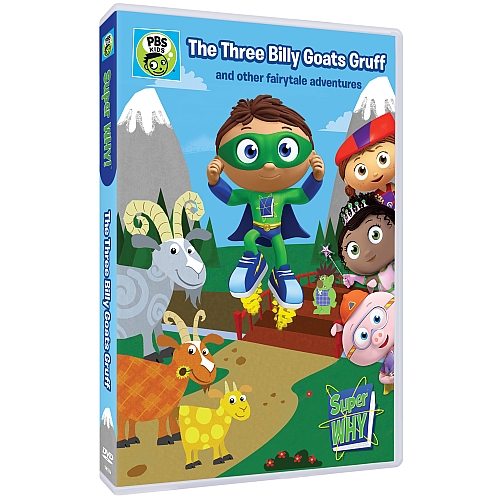 PBS Distribution recently released four stories from PBS KIDS’ popular Super WHY! series on the new DVD “Super WHY: Three Billy Goats Gruff & Other Fairytale Adventures”.  The four reading-powered adventures on this DVD not only help kids with the critical skills they need to learn to read, they also provide them with important life lessons. Two of the lessons kids will take away after watching these stories are the importance of good manners and that in order to learn a new skill, you need to be persistent and keep trying!

Super WHY: Three Billy Goats Gruff & Other Fairytale Adventures is available on DVD now. The DVD has a run time of approximately 120 minutes and an SRP of $12.99. The episodes include:

Grandma will not let Red into the kitchen to get some extra special red velvet cake – and it’s making Red really mad! The Super Readers head into the story of “The Three Billy Goats Gruff,” who really want to cross the troll’s bridge…only this time the troll gets to tell his side of the story. The Super Readers wonder if anyone can make those rude goats behave, and Red figures out what she needs to tell Grandma.

“The Tortoise and the Hare”

Princess Pea and Red are partners in a potato sack race but can’t decide whether to go slow and steady, or fast. The Super Readers fly into the famous race between the tortoise and the hare to help the friends decide on a winning strategy. By the time they have reached the finish line, they’ve learned that winning isn’t always about coming in first.

Princess Pea’s twirls are falling flat and her dance recital is just days away. The Super Readers soar into the story of “The Ugly Duckling,” who’s having just as much trouble learning to swim. With hard work and determination, the Ugly Duckling finally hits his stride and Princess Pea learns that practice makes perfect.

“The Elves and the Shoemaker”

Whyatt has a secret admirer and he wants to know who it is. The Super Readers visit the story “The Elves and the Shoemaker” and discover that the shoemaker is just as curious about his own secret friends. After helping the shoemaker write a note to the elves, Whyatt figures out a way to uncover his own mystery friend.

My girls really enjoy watching Super WHY, especially my 4 year old who went through a period of non-stop requesting to watch Super WHY in a way that only pre-schoolers are capable of.  They were really excited to check this DVD out with me, although I know they’ve already seen the episodes before. It’s a great selection of episodes that had the girls requesting me to play the DVD over and over again.

The girls really enjoy being able to watch Super WHY which is great as it also seems to have sparked a re-interest in Super WHY in my 4 year old!

Super WHY! is a really great series that encourages an interest in literacy, as well as participation from the audience which really helps with getting kids to learn to read.

The Three Billy Goats Gruff & Other Fairytale Adventures sounds like a wonderful watch !