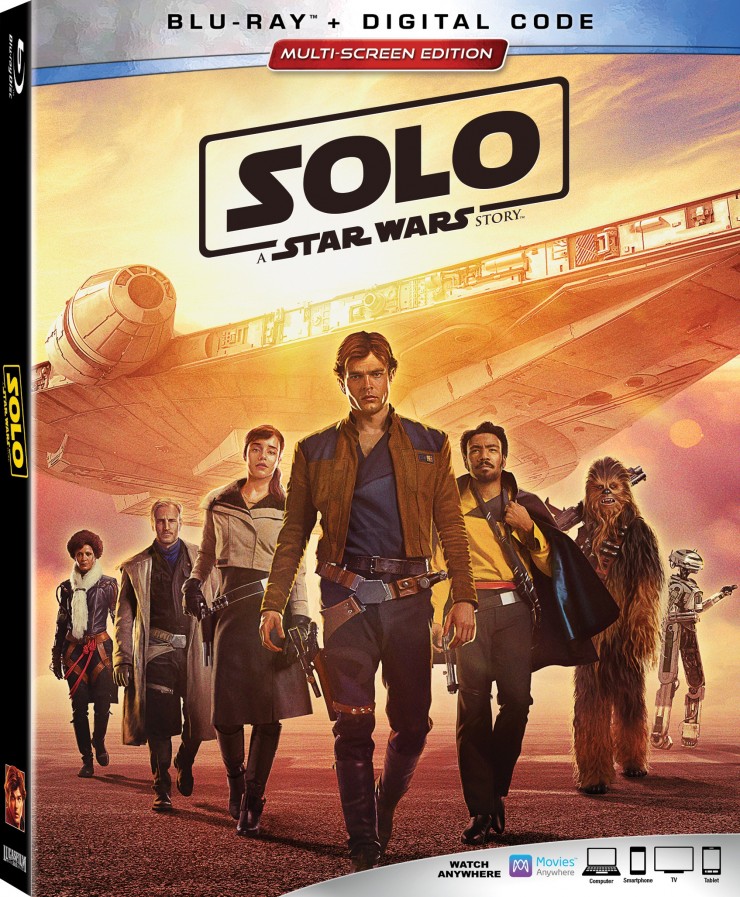 “Solo: A Star Wars Story” bonus content takes fans behind the scenes to experience compelling discussions with the star-studded cast and screenwriters Jonathan Kasdan & Lawrence Kasdan (writer of Star Wars: The Empire Strikes Back and Star Wars: Return of the Jedi); a revealing feature on Chewie and his enduring friendship with Han; a close-up look at the original version of the Millennium Falcon and Han’s first time piloting the infamous ship; the creation of the film’s otherworldly settings and pulse-pounding action sequences; and eight never-before-seen deleted and extended scenes.

DIGITAL AND BLU-RAY BONUS MATERIAL (may vary by retailer):

Sit down with director Ron Howard and the stars for an intimate and entertaining discussion of the film’s making.

See what it takes to bring your favorite Wookiee to life in this lighthearted look behind the scenes.

Get behind the wheel for the making of this high-octane chase through the streets of Corellia.

Explore the challenges and thrills of creating this action-packed sequence, including its remote location and spectacular effects.

Meet the newest droid—and the talented actor who helps bring her to life.

Take an in-depth tour of the rough-and-tumble bar where strangers mix and gamblers risk all in the legendary card game, Sabaac.

Join Han and Chewie at the controls of the Millennium Falcon to see how this legendary moment in Star Wars history unfolds.

The legendary John Williams is credited with the “Han Solo Theme” and original Star Wars music.

I thoroughly enjoyed watching Solo: A Star Wars Story, it makes for a fun and action-filled movie night for any Star Wars fan. While is a stand-alone film, there are a lot of nods to past Star Wars films that fans will appreciate, including the answer to exactly how Han made the Kessel run in less than twelve parsecs (since parsecs are a measure of distance not time). Learning how Han won the Falcon from Lando and finding out how Chewie and Han met was just satisfying.

The extras included are a lot of fun to watch through as well, I especially enjoyed the compelling discussion between the cast and Ron Howard.

Overall, this is a great pick for a fun movie night for mom and dad, whether you are a star wars fan or not.

Looking for a little fun with the whole family? Check out this SOLO: A STAR WARS STORY Activity Pack, filled with tons of cool things for you and the kiddos to do together, including a Mighty Wookiee Word Search!

Disclosure: I was provided with the above mentioned product in order to facilitate this review. All thoughts and opinions are honest and my own.

I liked the film, although due to extensive production problems, Solo became the most expensive film that Lucasfilm had ever shot when its initial budget was about $ 125 million. There were many reasons why Solo failed at the box office, such as a competitive release date and a weak marketing company, although this could have been easily avoided. It is a pity that because of this, the future of the Solo film series has been questioned. Although Solo is an independent film, he laid the foundation for the following films. The filmmakers scattered bread crumbs all over the picture with hints of a sequel.