Skip to Content
As an Amazon Associate I earn from qualifying purchases.
Hi everyone! First, thank you Elizabeth for letting me guest post here! I’m Cheryl and I do have my own little corner of the interwebs at http://beautifulsideofhectic.com. I mostly blog about our day to day life- My 5.5 year old daughter Lauren, my husband Adam, our cat Timbit and our 4 year old daughter Jillian makes regular appearances on my blog. Jillian happens to have Cerebral Palsy and that’s a topic I blog about most. Until I actually had a premature baby, I had no idea there was an awareness month for it. Guess that’s true for CP awareness as well (that’s in March).

It was a dark and stormy night…Nah, scratch that. It was a terribly hot and humid day in September in Toronto. I had just purchased a double stroller since Lauren was only 19.5 months and still relied on the stroller a lot. Since my due date wasn’t until  November 14, I figured I still had tons of time to prepare. Jokes on me.
One of my friends was pregnant and due at the same time I was. Our due dates were only 3 days apart. She ended up having a micro-preemie born at 26 weeks. One of our mutual friends had had a 24 weeker a few years previously and she had been out of the country when Noel was born. Wanting to lend her support, we loaded Lauren and her son Lincoln into the new double stroller to take it for a test drive. It was really easy to push and I didn’t think much about it.

After visiting Noel, Lauren was due for a nap, so I decided to lay down with her since I felt fairly damp when I came home. I was trying to come up with any viable excuse why I’d be “damp”. (I’d never experienced a breech baby before, so maybe she kicked my bladder?) After laying down for an hour, I stood up and felt that familiar trickle again. I immediately called Adam and took myself to the hospital. And thus began my 4 days of hospital bedrest- at 29 weeks, 2 days pregnant. (The initial ‘episode’ was on a Thursday, but I wasn’t actually admitted until Friday afternoon) 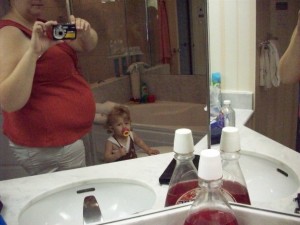 My last belly pic- taken at 26 weeks
On Sunday night, trying to settle in, I was doing my twice daily NST (non-stress test) when Jillian’s heartbeat was up to 210 bpm for over 25 minutes. Based on this alone, my OB (who was on call) ordered an IV to be put in- just in case. Come to find out, he didn’t think I was going to make it through the night without having a baby.
He came to check on me around 8am on Monday. Using ultrasound (since my water had broken), he commented that my cervix was still thick and closed and although I’d been having contractions all night and through the morning, we figured they were braxton hicks and they’d go away. No such luck. I paged my nurse at around 10am. She came RUNNING to my room. I never paged, if I needed/wanted something, I generally waited until they checked in with me. She noticed immediately how serious my situation was and paged for a doc stat. Lucky me, I got a resident. She was debating and debating about checking me since she didn’t want to introduce any cause of infection. I told her to just do it since I was already on oral antibiotics. Immediately, her face fell and she said “uh oh”.  Not really reassuring when a “doctor” says ‘uh oh’. I asked what was wrong and she said “Well, I feel a foot, should I push it back in?” Are you freaking kidding me, lady?! Don’t make her mad!! Go get a real doc! While my room became a bustle of activity quickly, I called Adam to make it to the hospital. He asked if he had time for a shower and I said “nope. If I’m not in my room, I’m in the OR” 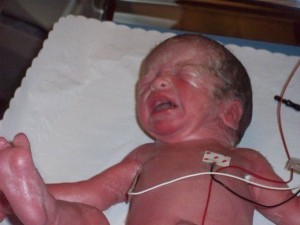 Jillian Nicole was born screaming on September 8, 2008, at only 30 weeks gestation. Since she was breech, I saw her bum as they lifted her out (via c-section) before she was whisked away to the NICU. For the first few hours, I only had pictures and one video to look at while I was in recovery. When I was finally taken to see her, I was still pretty numb from the chest down and she seemed like quite a distance away in her isolette. I only got to touch her foot. 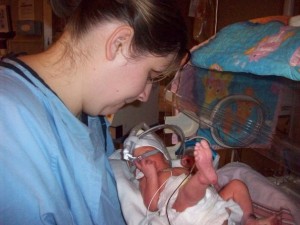 The first time I held Jillian, briefly for a bedding change.

I often say that I didn’t feel like an active participant in her care. I was always the last to know something (like medical exams) and I had to be told when I could touch/hold her. Back then I had no idea I could stand up for myself, I’d always been taught to ‘respect’ others. After all, I don’t have a medical degree.
In the end, Jillian spent 5 weeks to the day in the NICU. Coming home weighing just under 5 lbs and on a very strict 3 hour schedule. I’m positive that having a premature baby was one of the hardest things in my life. Probably a good thing I learned a lot through it.

Oh my gosh. This is a great story. Thank you for sharing. I never even heard of the term micro premie before. That's incredible.