I love pop so much, I can’t even lie about it.  There just isn’t anything as refreshing as a cold soda.  Just something about the little bubbles is irresistible to me.  However, since I’ve been trying to lose my pregnancy weight I’ve been trying to cut down on the soda drinking.  Wouldn’t it be nice to find a soda that is healthier for you for a near guilt free indulgence?
With SodaStream you can!
We received the SodaStream™ Fizz Home Soda Maker in a vibrant green along with a sampler pack of syrups for review.  Exciting right? 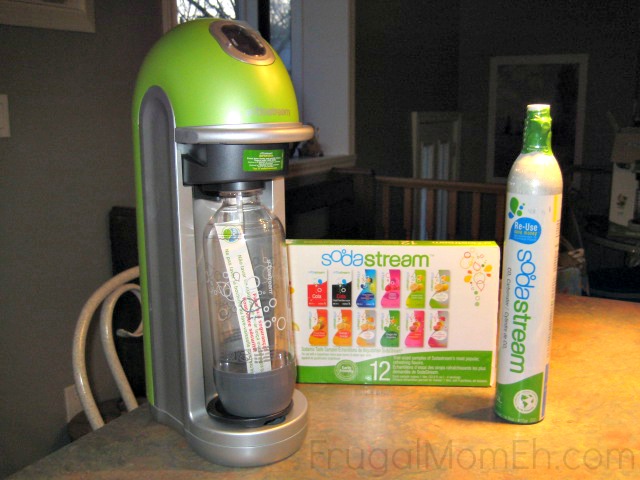 SodaStream offers over 25 regular, diet and caffeine-free soda mix flavors to choose from and you won’t believe just how much healthier SodaStream drinks really are.  Here is just a sampling based on an 8 oz. serving to give you an idea of the difference SodaStream can make:

To make the soda you want to fill the reusable bottle that comes with the SodaStream with water and then chill.  Next use the tilt lever on the machine to easily screw the bottle in.  Carbonation is as easy as pressing down on the ledge of silver plastic you can see in the photo below.  This injects CO2 into the water.

Next use the tilt lever again and unscrew the bottle.  Tilt the bottle to pour in the flavour of your choice, put the cap on the bottle and slowly agitate.  You now have Soda ready to enjoy!

Just a note… refrain from putting the syrup in the bottle and then carbonating.  You will make the biggest mess of your life… including your first birthday.  Seriously, I speak from experience. 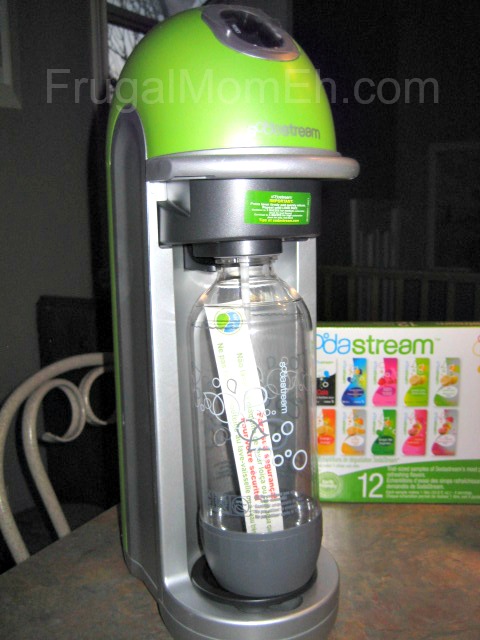 What’s Different about the SodaStream Fizz?

SodaStream recommends 3 injections of CO2 as a “normal” amount of carbonation however I found that wasn’t enough for my tastes.  Luckily though you can make it as carbonated as you want and the fizz chip makes it really easy to gauge just how carbonated a drink you are making.

The fizz chip is an LED display on the front of the SodaStream Fizz.  It not only shows you the strength of fizz in the drink you are making but it also helps keep track of the level of gas in your CO2 canister.  This should help avoid any embarrassing situations like running out of CO2 during a party!

SodaStream also offers a large variety of flavour mixes and syrups.  Thanks to the Sample pack we were able to try out quite a few for the purpose of this review.  We tried Cola, Sugar Free Cola, Ginger Ale and Pink Grapefruit. The Cola flavour was good, it reminded me of what Coca Cola tastes like in the Caribbean/Mexico. The Sugar Free Cola wasn’t my favourite at all, but I really don’t like the Sugar Free versions of anything.  Splenda isn’t my thing.  For those who prefer Sugar Free though, you should be happy with the flavour.

Ginger Ale and Pink Grapefruit were really great.  I loved the fresh tasting flavour from these two. 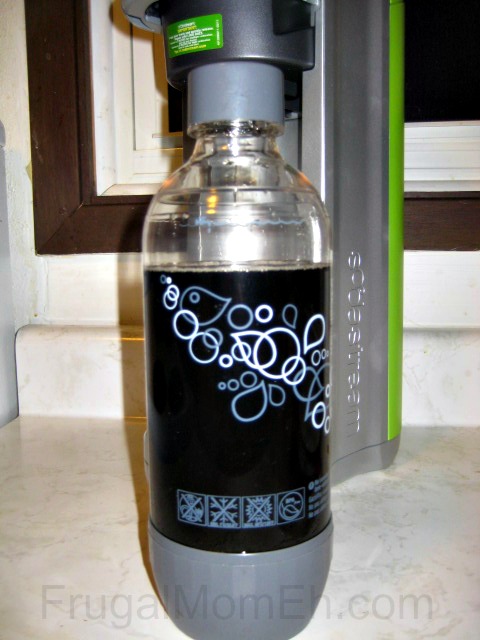 Does the Fizz Last?

One thing I was really curious about was how well the level of carbonation lasted.  I’ve read review after review of people complaining about the carbonation not lasting long in drinks they’ve made.  Now I am not sure what they figure as being “long” and since even store bought bottled pop loses it’s fizz once opened I was thinking they must mean within a few hours.

So I tested this for myself.

I injected the CO2 5 times into my water as that is the level of carbonation I prefer.  I had a drink right away and it was perfect.  Later that day I had another small glass and didn’t notice any decrease in the level of fizz.

So three days later I opened that bottle again knowing that realistically a bottle wouldn’t last that long in any normal pop-drinking household.   You know what I found?  It was just as fizzy as day one.  I declare the complaints about this as silliness.  Stop throwing the bottle around or leaving it open on the counter and you won’t have a problem with it losing fizz.

And it’s Environmentally Friendly too!

I was pleasantly surprised to find that the SodaStream machine does not require electrical power or batteries.  I don’t know why but I thought it would.  Not only does this save money on electrical usage and battery purchases but that is wonderful news for the environment.

SodaStream doesn’t stop there either when it comes to being green.  SodaStream claims that just one Reusable BPA-free bottle equals thousands of plastic bottles.

“One SodaStream carbonator makes 60 liters or 180 cans of beverage and is then re-filled to be reused. One SodaStream reusable bottle can make as many as 50,000 liters of carbonated drink.”

Do you have a SodaStream?  Do you love it?

I'd really like to get one of these, to save on cost, waste, and to have so many flavors available. I don't mind not supporting Coke or Pepsi, either!

I've used my sister's Soda Stream before and LOVE it! Helpful tip - you can use Mio for your syrup! Another sugar free option :-)

I would love this. Santa forgot it at christmas paradiseinmiami@aol.com Fran Major

I've been wanting to try this! Sounds really good!

I am so anxious to try this! It sounds fun and tasty too.