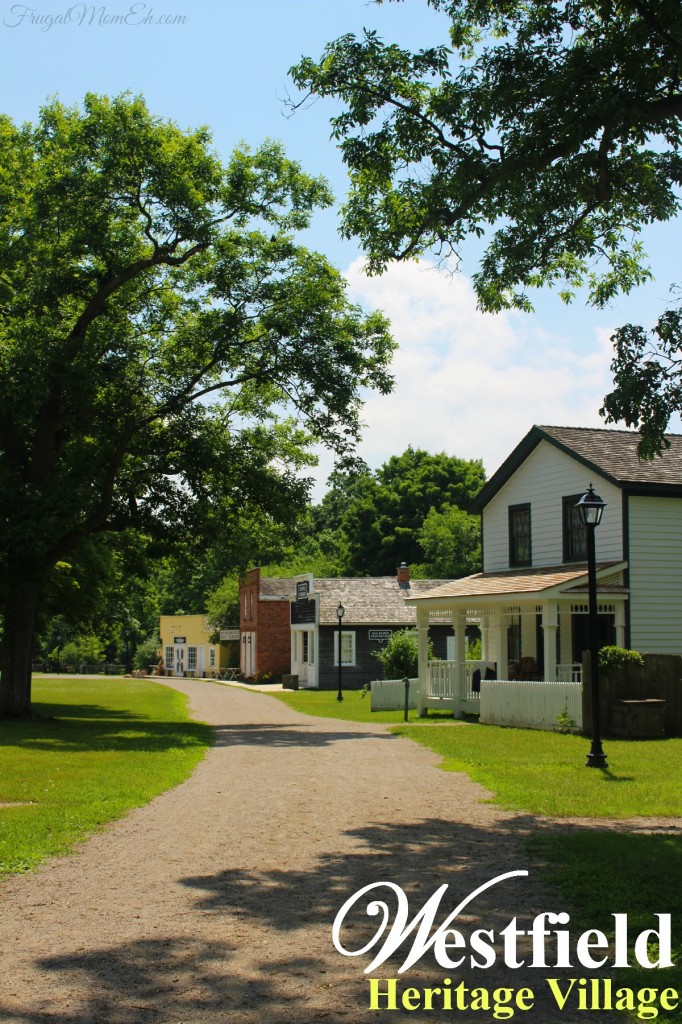 I spent the afternoon yesterday with my Sister, Keira and Ava walking through Westfield Heritage Village, located in Rockton (Hamilton), Ontario.

Westfield Heritage Village is a collection of over 40 historical buildings sourced from the surrounding area and restored as accurately as possible in order to recreate a village typical of the late 19th century.

The village is staffed with costumed historical interpreters and offers many demonstrations of how things were done at the time. 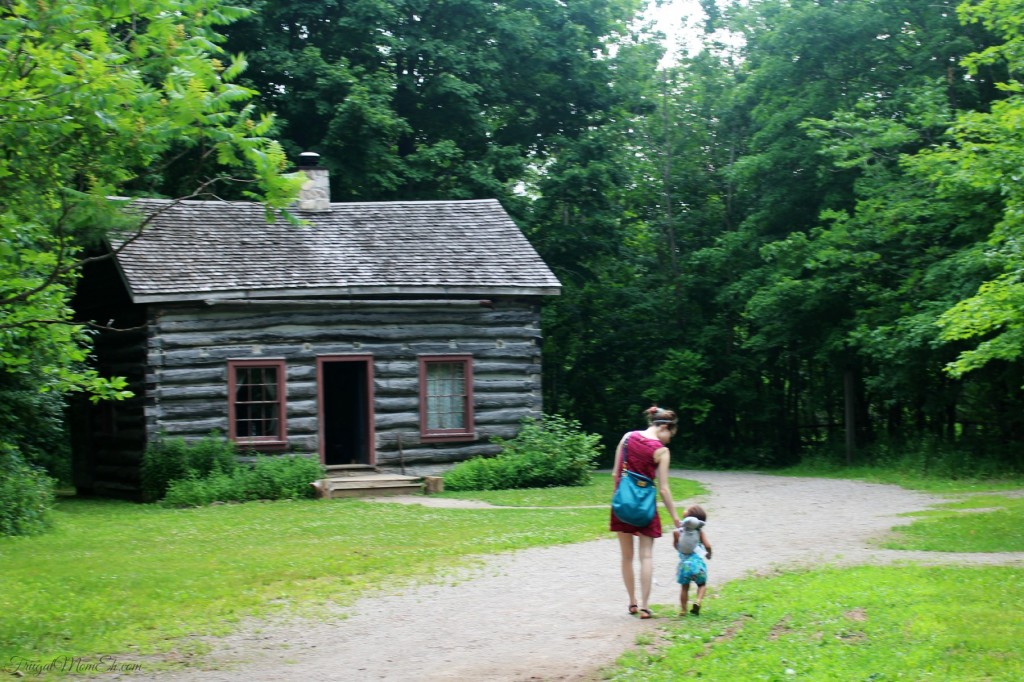 Note that the village is mostly in the middle of a woodlot so be sure to bring not only sunscreen but insect repellent as well.   It is also partially wheelchair accessible which also means only partially stroller accessible.  I would recommend using a baby carrier if possible as getting baby in and out of the stroller to look through buildings with second floors or steps gets a bit silly.

Most of the village is walk-able via dirt path and it is fairly large.  I think we got to maybe 1/2 of the buildings, so we will definitely be heading back later in the summer to take in the rest, perhaps during the Ice Cream Carnival in August. 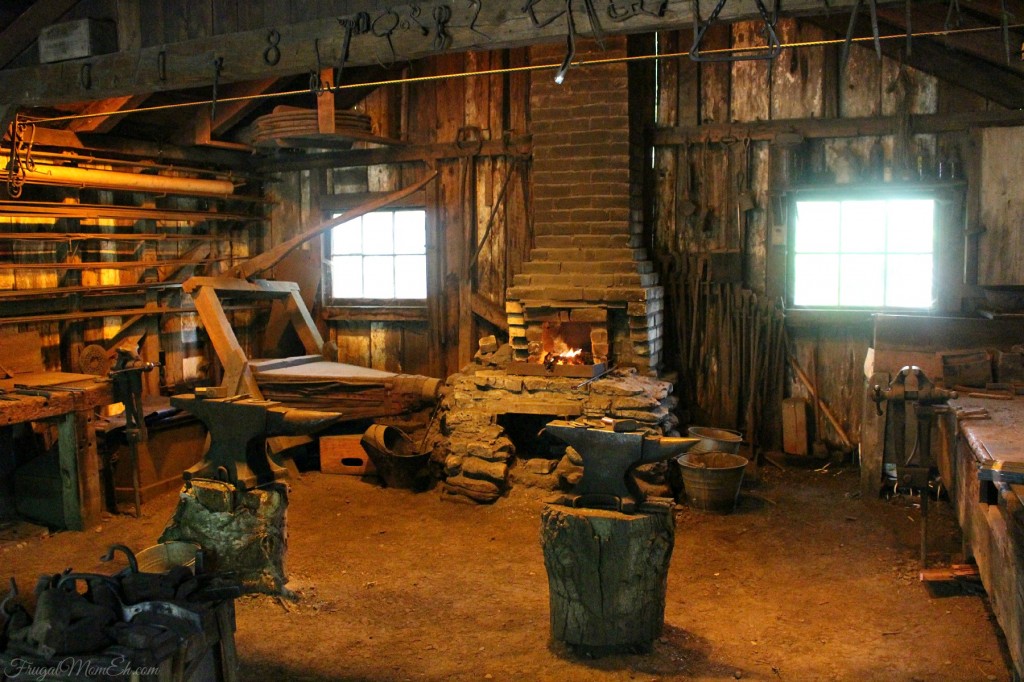 Our first stop was the Blacksmith’s House which was built before 1828 in Beverly Township.  It apparently housed a family of 10 with one large main room, a parlour, a pantry and an upstairs loft for sleeping quarters.

Right across from the Blacksmith’s house is the Blacksmith Shop which was one of the very first buildings moved to Westfield.  The Blacksmith was happy to demonstrate use of the billows as well as to share with us many fascinating details of his trade. 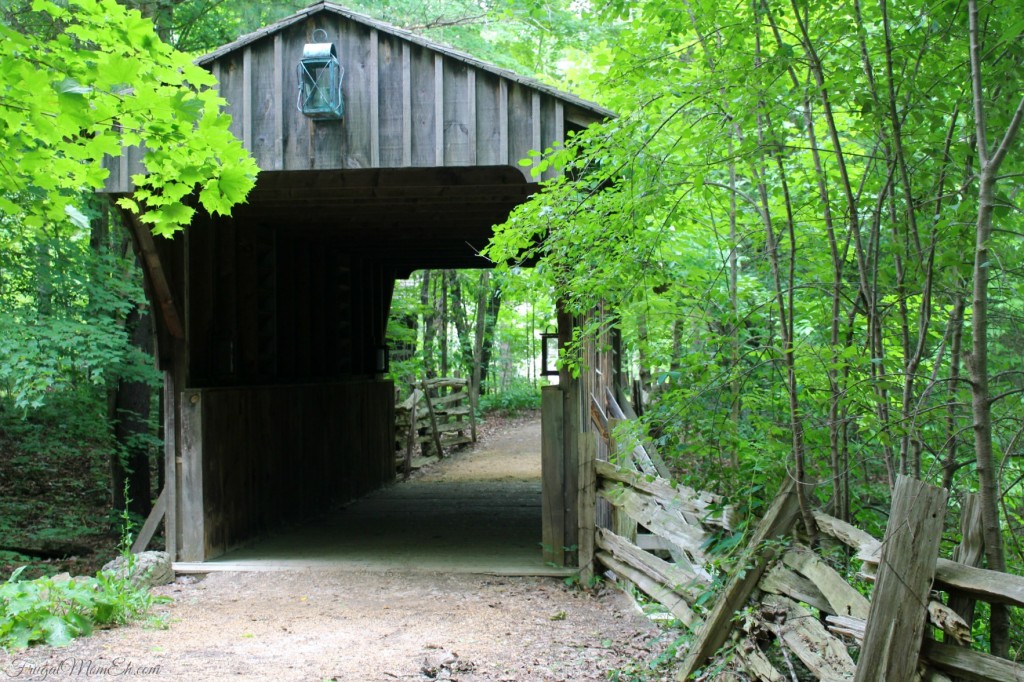 We loved walking through the covered bridge which is a reproduction of the style of bridge you would find in the Victorian Era.  The details, right down to the lantern holders are really special.  It reminded me of the covered bridge in Road to Avonlea. 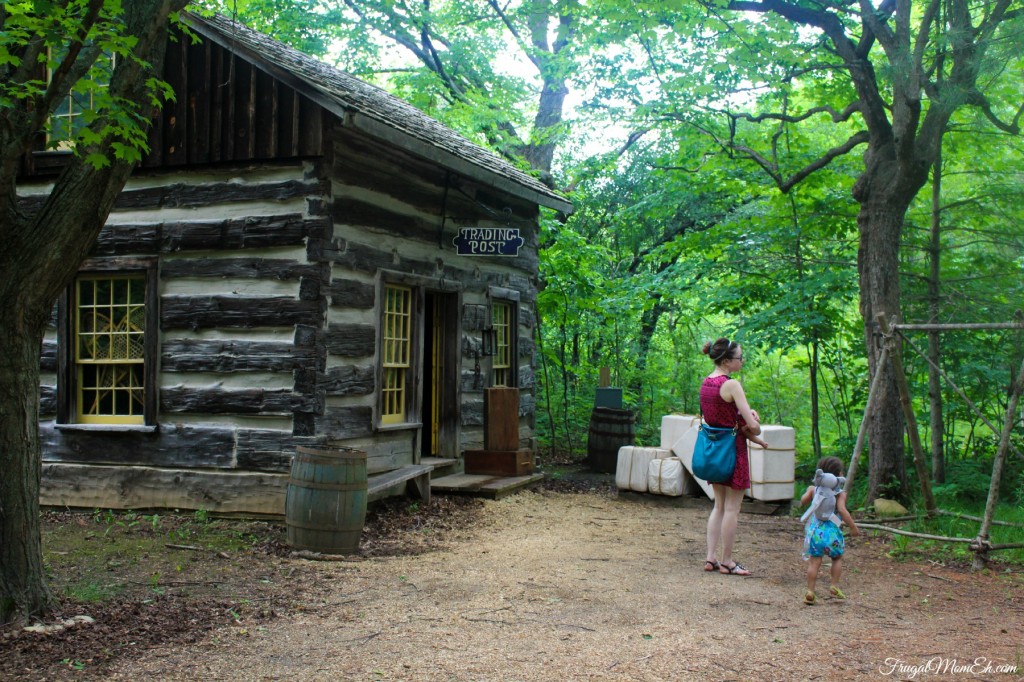 The Trading Post, which was built around 1830, from Leeds County, represents a trading post, circa 1802.  The interpreter at the Trading Post did an excellent job at getting Keira interested and involved, as well as his adult audience.

I have to say that all the interpreters we came across were quite excellent.  All were very knowledgeable and obviously interested in the history of the building they were interpreting. 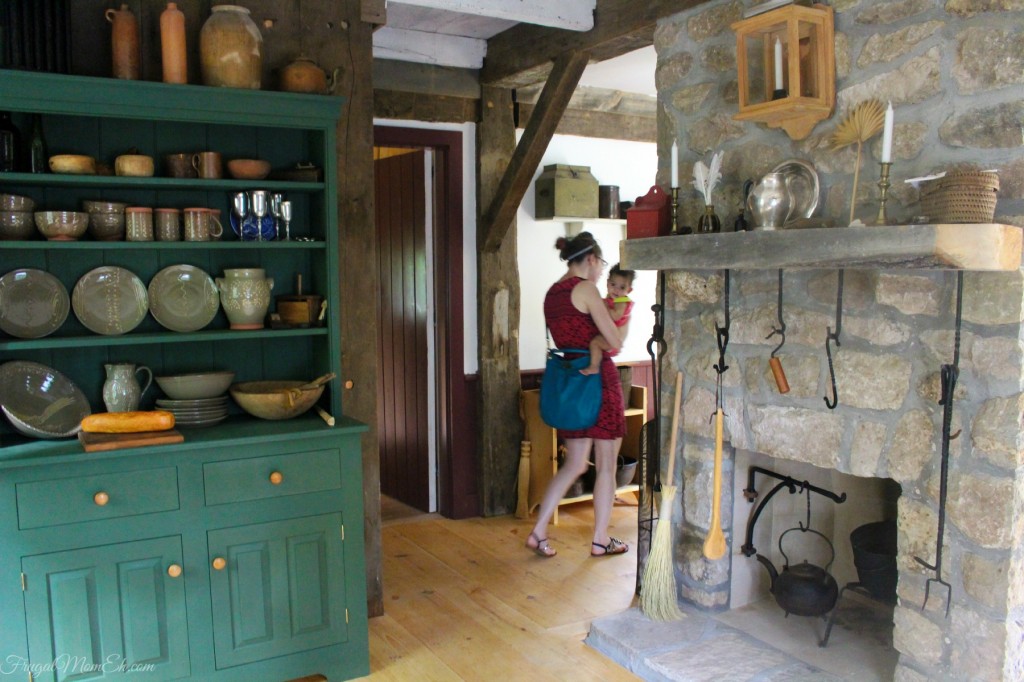 The newest addition to Westfield is the Westbrook House, which apparently just opened in May for viewing.   The building was brought over from Brant County and was build by the family of Haggai Westbrook around 1810.  The Westbrook House is in striking contrast to the Blacksmith’s House which was more the type you would find in Upper Canada at the time.  The Westbrooks were obviously wealthy and the house is what would have been considered large  at the time. 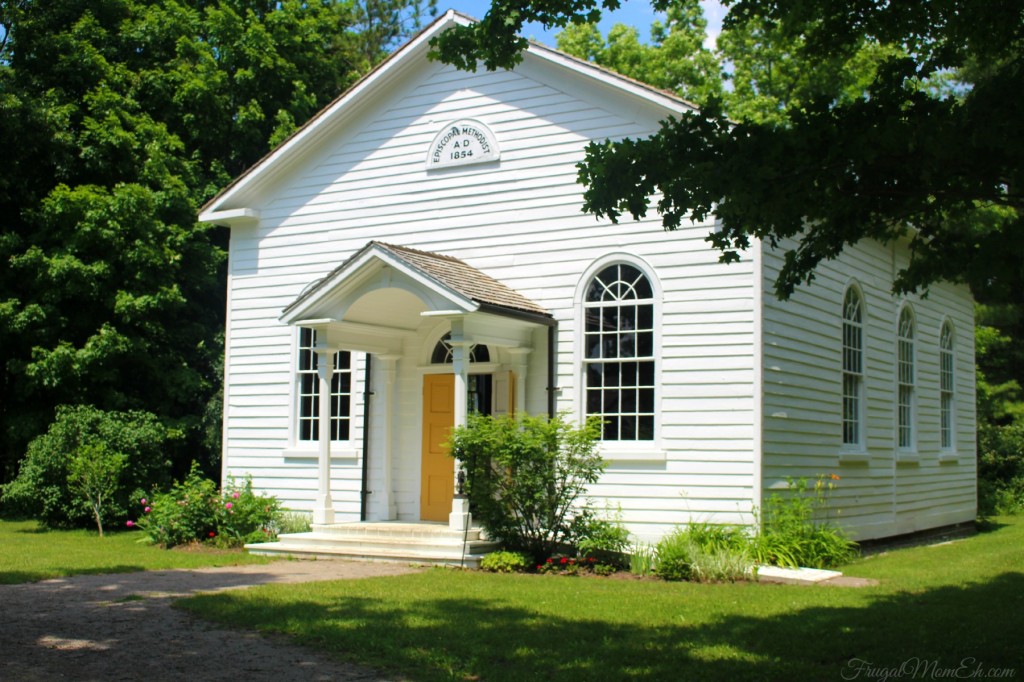 Mountsberg Church was built in 1854 by Charles Mount in Mountsberg.  According to the guide, until 1870 women were seated to the right and men on the left.  Our interpreter had a wealth of information to share with us about the building – it’s history and its restoration.  The Church is also available for contemporary weddings which would be pretty amazing between the use of the Church, the beautiful grounds themselves and the Hall also available for events. 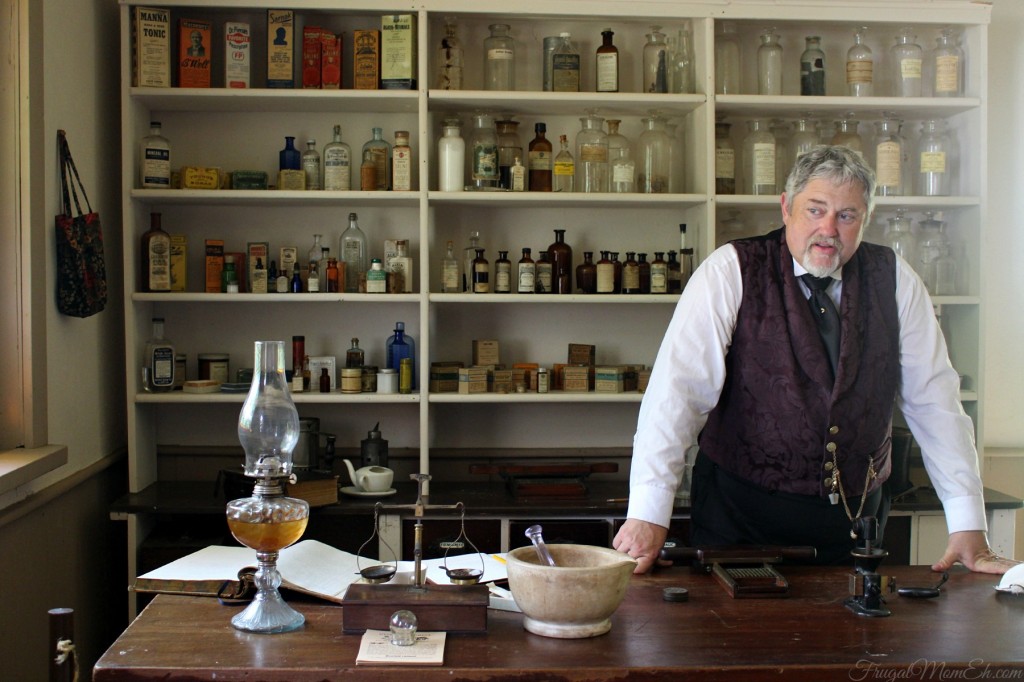 My sister was particularly interested in visiting the Drug Store which combines the examining room of Dr. Beattie with an apothecary.  The stained glass window, showing a mortar and pestle, was made for the first drug store in St. George.  The interpreter playing Dr. Beattie demonstrated how a tooth would have been pulled at the time as well as how medicines and pills would have been made at the time. 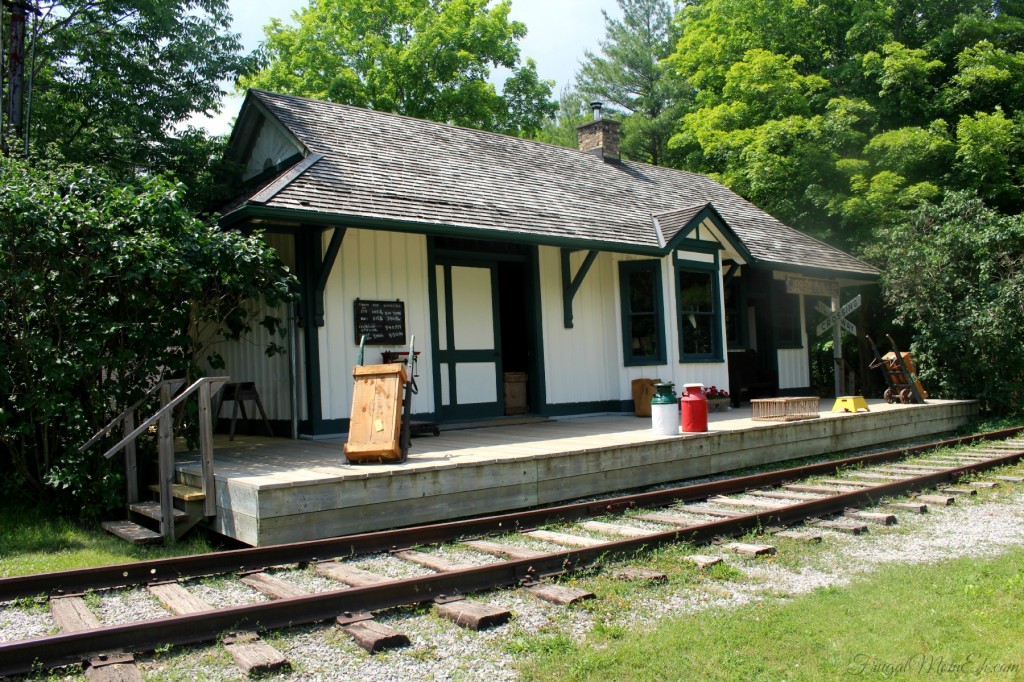 Located right behind the Drug Store is the The TH&B station, originally located in the village of Jerseyville, was built in 1896 and operated between Hamilton and Brantford. It was also featured in the movie Anne of Green Gables and the television series Road to Avonlea.  Keira got a train ticket which she faithfully held on to the rest of our day. 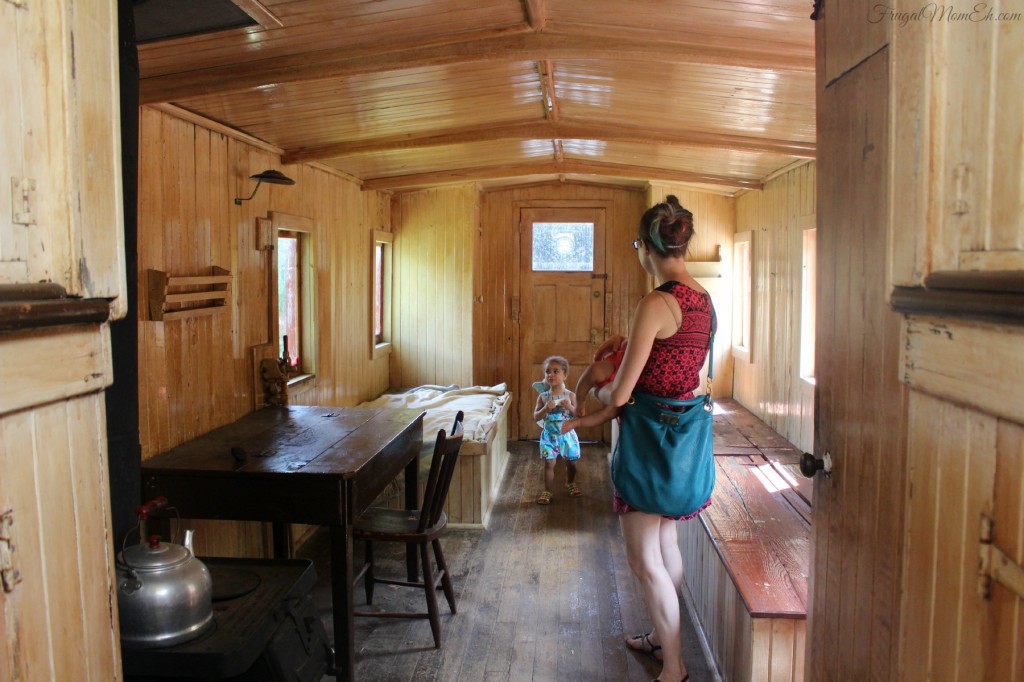 Visitors are able to even venture inside one of the cars of the train which seemed to particularly fascinate Keira.  It was actually really interesting to see inside, I was surprised by all that I found in there, I wouldn’t have expected some of the facilities we found inside. 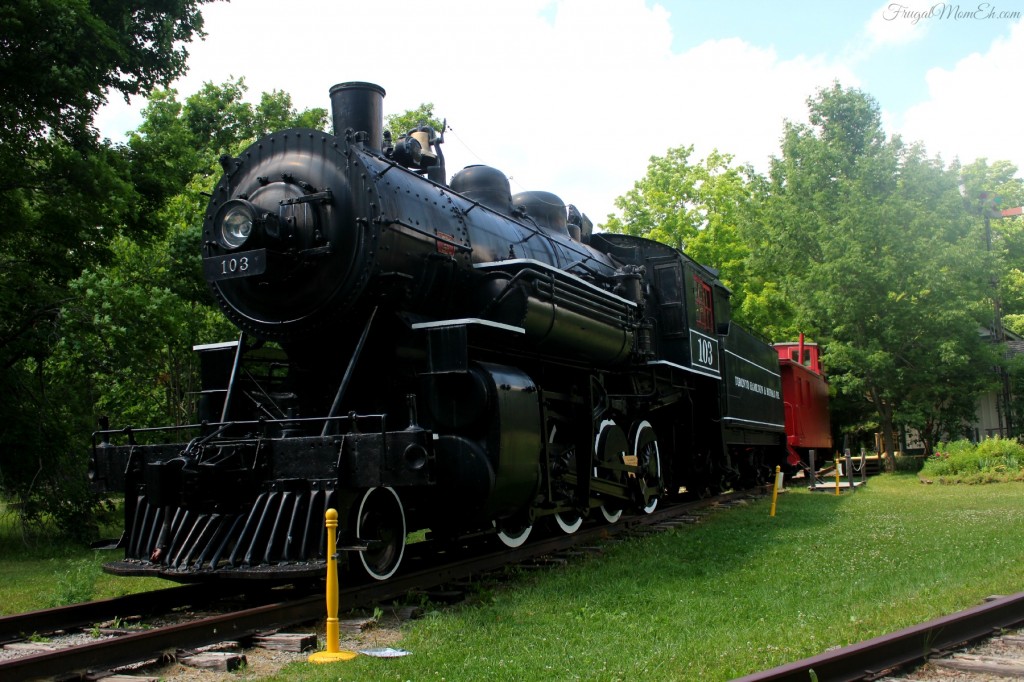 TH&B Locomotive 103, this Class “G” Consolidated type steam locomotive was built in Montreal in 1910 for the Toronto, Hamilton and Buffalo Railway as No. 52, but its number was changed twice, finally to 103.  After many years of service, this mighty locomotive, one of two of its type to be preserved, was placed in Hamilton’s Gage Park before being moved to Westfield in the early 1970’s. 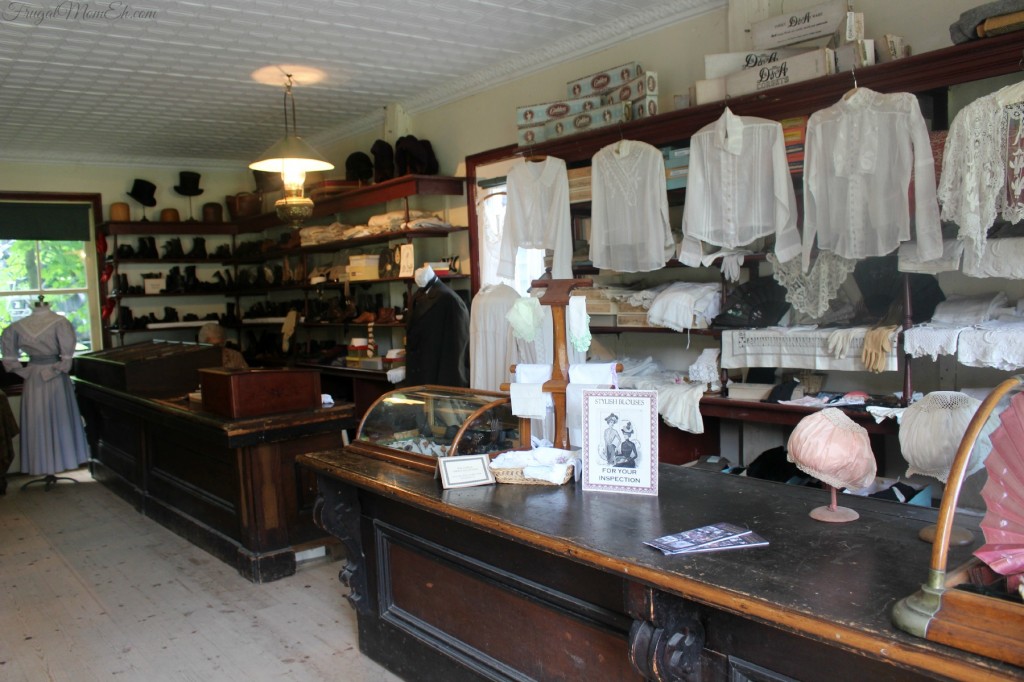 McRoberts Dry Goods Store was originally located in the town of Troy, the second floor depicts the working and living area of a seamstress. The main floor features ready-made clothing, materials, and trimmings for making your own.  It features a rather large and impressive collection of clothing from the time period, including a section of baby and childrens clothing. 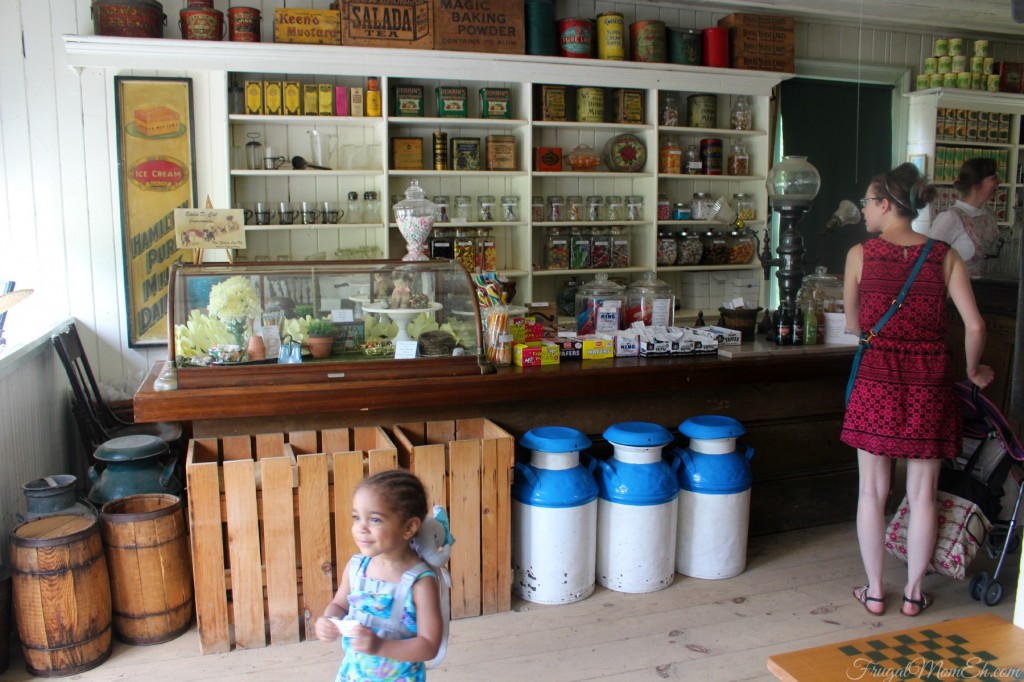 Stopping in at the General Store is a must.  The building is from the village of Springfield in Elgin County, circa 1848. The storekeeper also served as a banker, extending or denying credit to his customers. Eddie D. Cat Confectionery features old-fashioned candies and other treats. 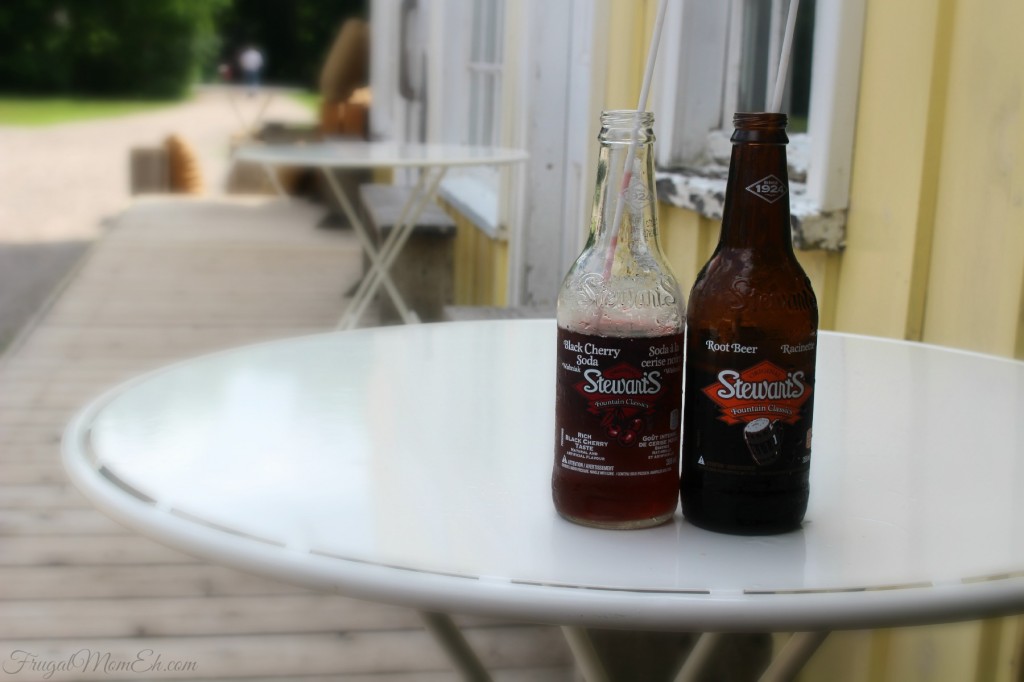 It was hot so this was the perfect time to buy some ice cold soda from the General store and enjoy it out on the boardwalk.  I definitely recommend the Black Cherry.  Yum! 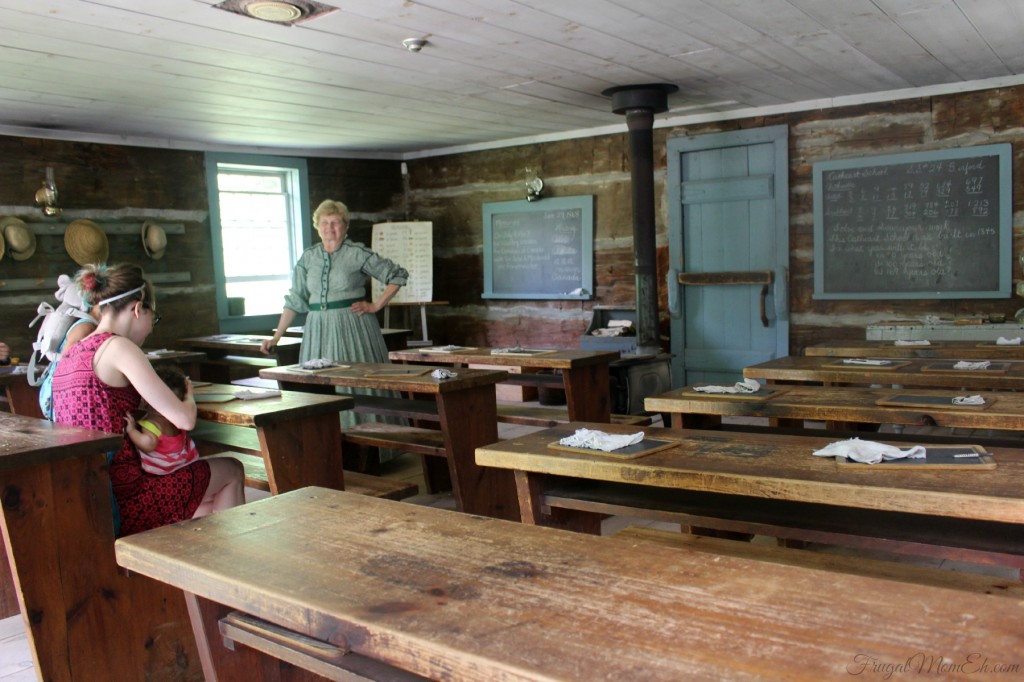 Another of our favourite stops was the Cathcart School.  Built in 1845, from Brant County.   The schoolhouse was particularly interesting to us as our dad actually attended a one-room schoolhouse before it burnt down in 1957, the very same one my grandmother attended in the 1920s. 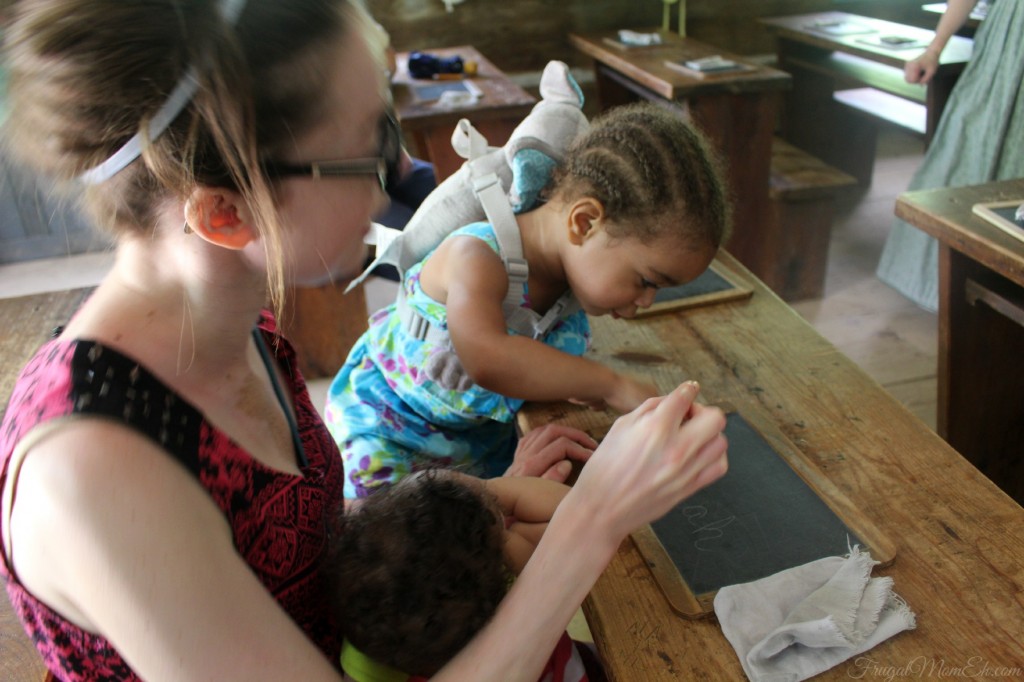 Keira loved practising her letters on the slate boards with real slate pencils.   The school also features a bell the teacher may let you ring if you’ve been well behaved and remember to clean your slate. 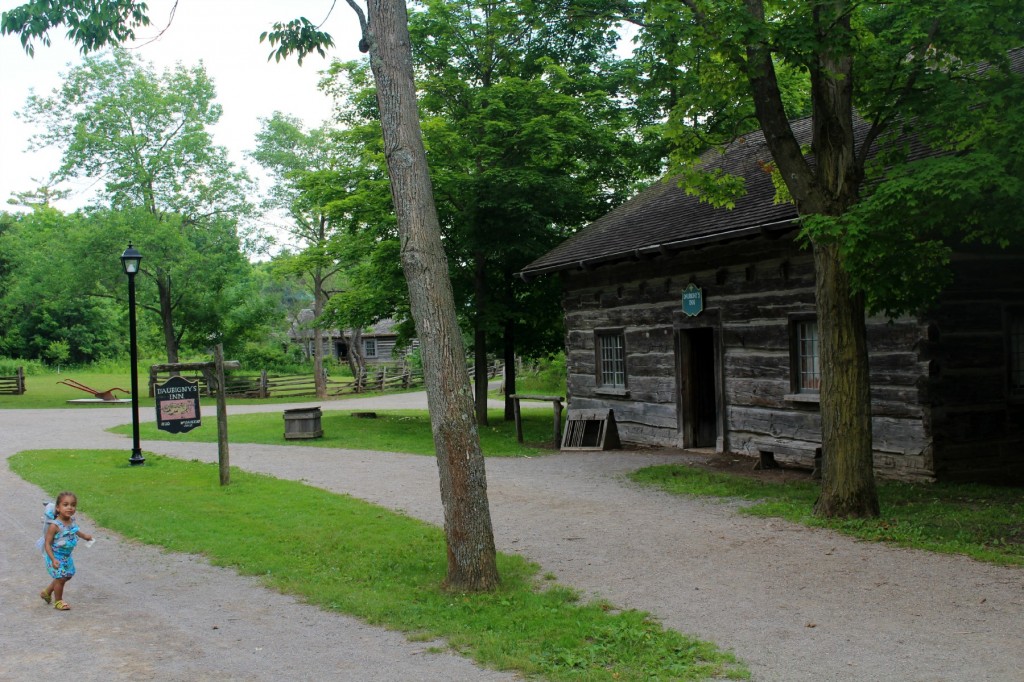 Operated by Hamilton Conservation Authority, Westfield Heritage Village is open Sundays and Holidays from 12:30 p.m. until 4:00 p.m. from March through October.

Next time we will show up at opening and planned to stay for the day, and we will definitely be returning to see the rest and to experience the village during different seasons.  Westfield Heritage Village is a true treasure and so interesting and fun for all ages, and I am thrilled that we discovered it!

Westfield Heritage Village is open for Canada Day, and I can’t think of a better way to celebrate than by exploring life at the very beginning of our wonderful Country.

Westfield heritage village is so mesmerizing for me because I love and respect that era and I am fascinated by their way of life in that century.I would love to visit there someday.It reminds me of Upper Canada Village near Cornwall Ontario..

So many wonderful comments about this

One of the many places located in "my backyard", it is nice to visit

At the end the month we'll be visiting family close to the area....might just have to check it out. Love heritage sites. Never heard of Westfield, looking forward to seeing it :)