I recently spent the weekend in Thunder Bay, Ontario. It’s a city I have driven through before but have never spent time exploring, or even considered as a place to go adventuring. Boy was I wrong!

The weekend was part of Ford’s #EscapeandDiscover event that brought 12 Toronto area influencers together on a mystery trip. It really was a mystery too. I agreed to attend an overnight event with Ford with absolutely no details as to where we were going or what we would be doing. In fact, I had no idea where I was heading to until early Saturday morning when we arrived at Toronto’s Thorncrest Ford.

I used to be pretty adventurous and always down to go on random trips with my friends. I mean I did once go on a frightening trek to Buffalo in my Ford Mustang at 2 am on a whim with a friend at one point. Suffice to say, despite my type A personality and desire to have way more control over what was going to happen over the weekend, I thoroughly enjoyed the mystery of the whole adventure.

The 12 of us were split into 4 groups, headed by an also-in-the-dark Ford rep – my team included Chris of realmantravels.com, Davindra of goatrotichronicles.ca and Craig from Ford, also of bigdaddykreativ.ca.   We were then finally given the information about where we were all headed. 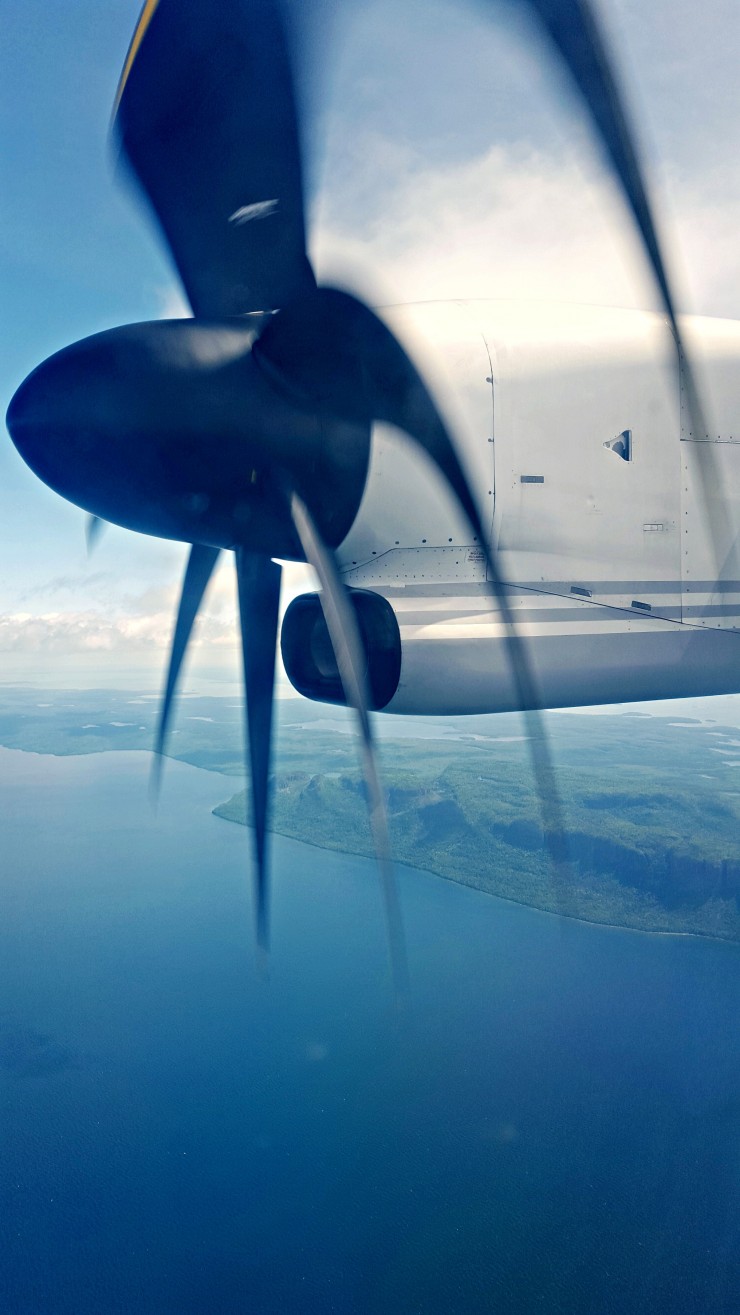 My team discovered we were flying to Thunder Bay. Anyone that knows me well knows that I have a major fear of flying. So the panic I felt when I realised we were going to be flying was not good, so you can imagine my horror as I discovered we were flying on a propeller plane out of Billy Bishop Airport. The horror. It was actually fine though and after surviving two flights on a smaller plane over a 24 hour period, I think I am over my flying anxiety.

Once we landed in Thunder Bay, we were met with Matt and Malcom, also on the Ford team along with our ride for the weekend – a gorgeous white 2017 Ford Escape which we used to explore in comfort as much as we could around Thunder Bay in less than 24 hours.

So if you are in Thunder Bay, what are the must-see attractions? Well here is a quick run down of 7 Must-See Attractions in Thunder Bay – some of which we weren’t able to see but are on my bucket list for my next trip to Thunder Bay (and there will definitely be one, but next time I’m bringing my DSLR, I was kicking myself all weekend for not bringing it!)

The Terry Fox Monument just off the Trans-Canada highway on the outskirts of Thunder Bay is the one attraction I have experienced before. Once when on my way to Manitoba to help with relief efforts from the Red River flood and the second time while trekking across Canada. 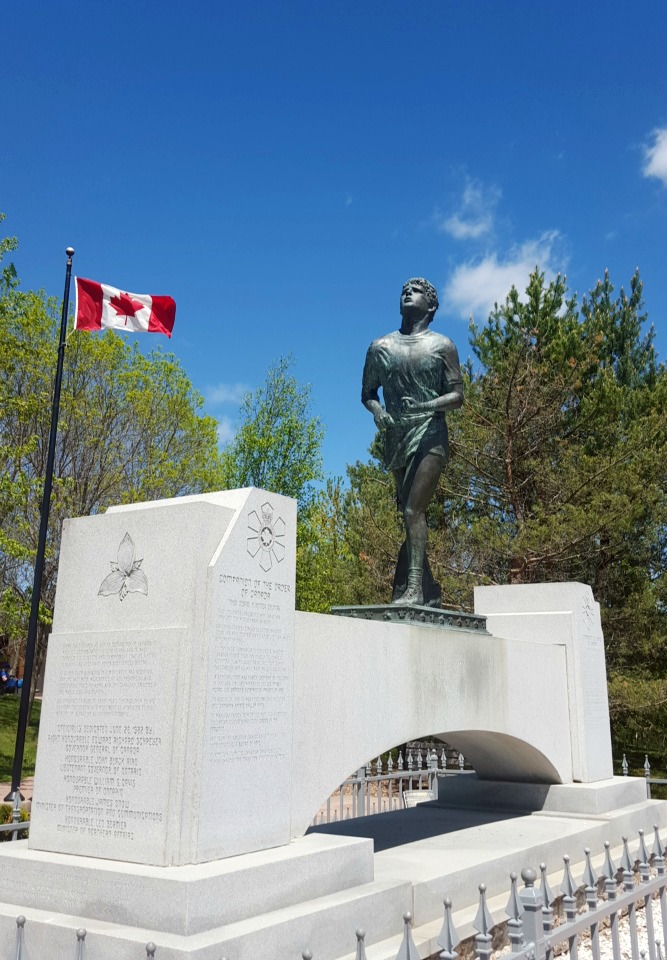 This time was just a little bit different, a little more sombre with the sound of bag pipe music being played by another visitor, drifting down the path in tribute to Terry Fox. It’s also a gorgeous lookout spot to take in a spectacular view of Thunder Bay. 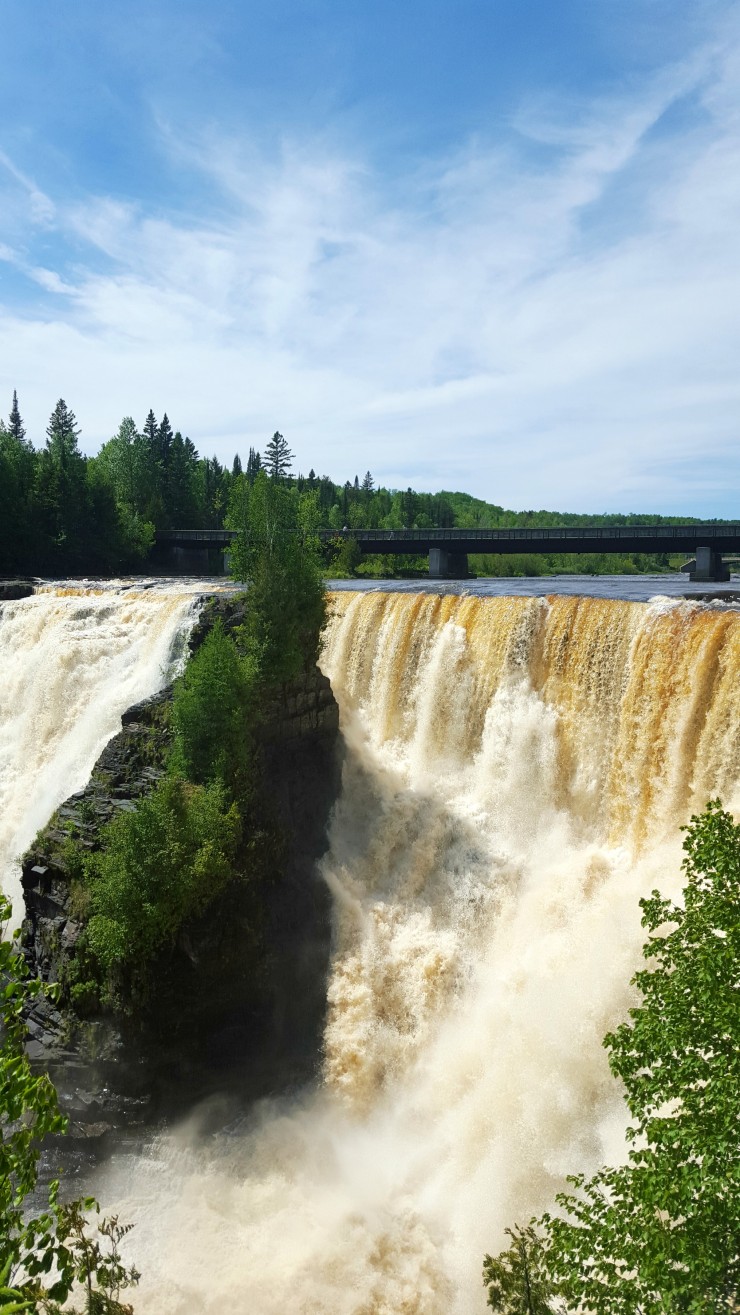 Our second stop was to Kakabeka Falls on the Kaministiquia River, about 30 km west of Thunder Bay. The falls has a drop of 40 metres (130 ft) and cascades into a gorge carved out of the Canadian shield. It is actually the second highest waterfall in Ontario which is why it has been nicknamed “the Niagara of the North”. The name “Kakabeka” comes from the Ojibwe word gakaabikaa “waterfall over a cliff”.

I actually prefer Kakabeka Falls to Niagara Falls as you can take in incredibly close views of the falls and gorge from a boardwalk that wraps around the top of the falls. I was in awe of the rock face of the gorge in which you can view the many layers of shale and other rock compressed over time – which has even revealed 1.6 million year old fossils. Apparently the view of the falls is even more spectacular in the winter.

The view of the copper coloured water cascading down the falls is unparalleled and a stunning display of the power of nature.

The next stop is Mount McKay, a mafic sill found south of Thunder Bay that can be seen overlooking the city as you drive through it and is located on the Fort William First Nation Reserve. Mount McKay was actually formed during a period of magmatic activity about 1,100 million years ago. It is also the highest, most northern, and best known of the Nor’Wester Mountains.

We did not have the opportunity to drive up closer, but there is a lookout providing views of Thunder Bay and the harbour. 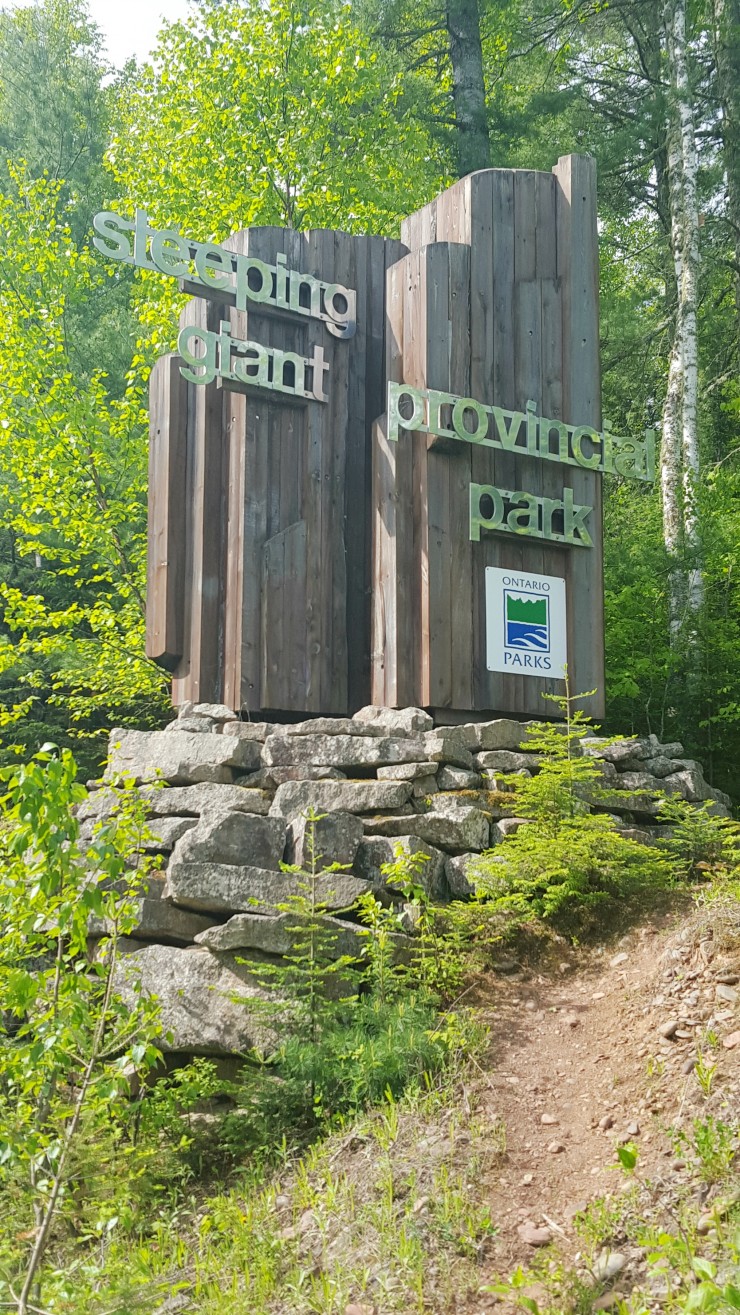 The next day we drove in the other direction to visit Sleeping Giant Provincial Park. The primary feature of the park is the Sleeping Giant, which is a formation of mesas and sills resembling a giant lying on its back when viewed from the city of Thunder Bay. 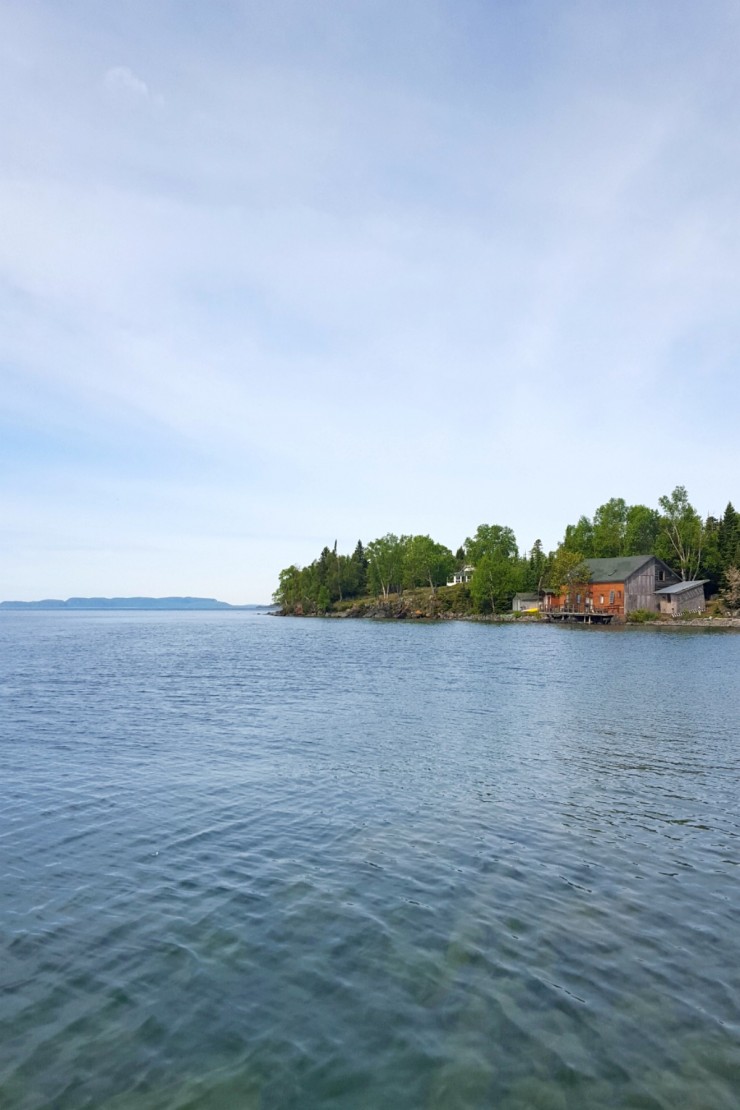 Driving through the road system that takes you through the park is incredible in and of itself. We came across at least a dozen deer, along with a fox and a ground hog on our route through the park to our first stop at Silver Islet which is the site of a sunken mine and a small seasonal community at the southern-most tip of the peninsula. 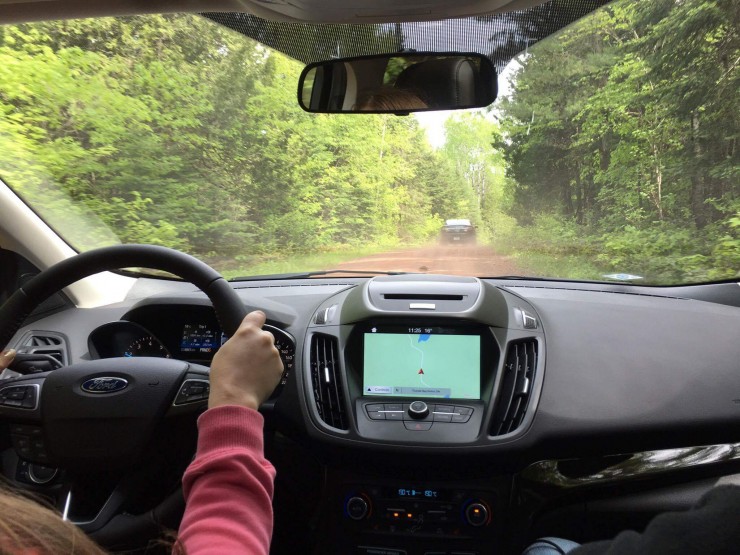 I had the opportunity to take over driving the Escape through the park on our drive from the Silver Islet to the Thunder Bay Lookout. This is a really fun, although somewhat hair raising drive down a narrow twisting dirt road that eventually gives way to solid rock – all of which the Escape handled beautifully. 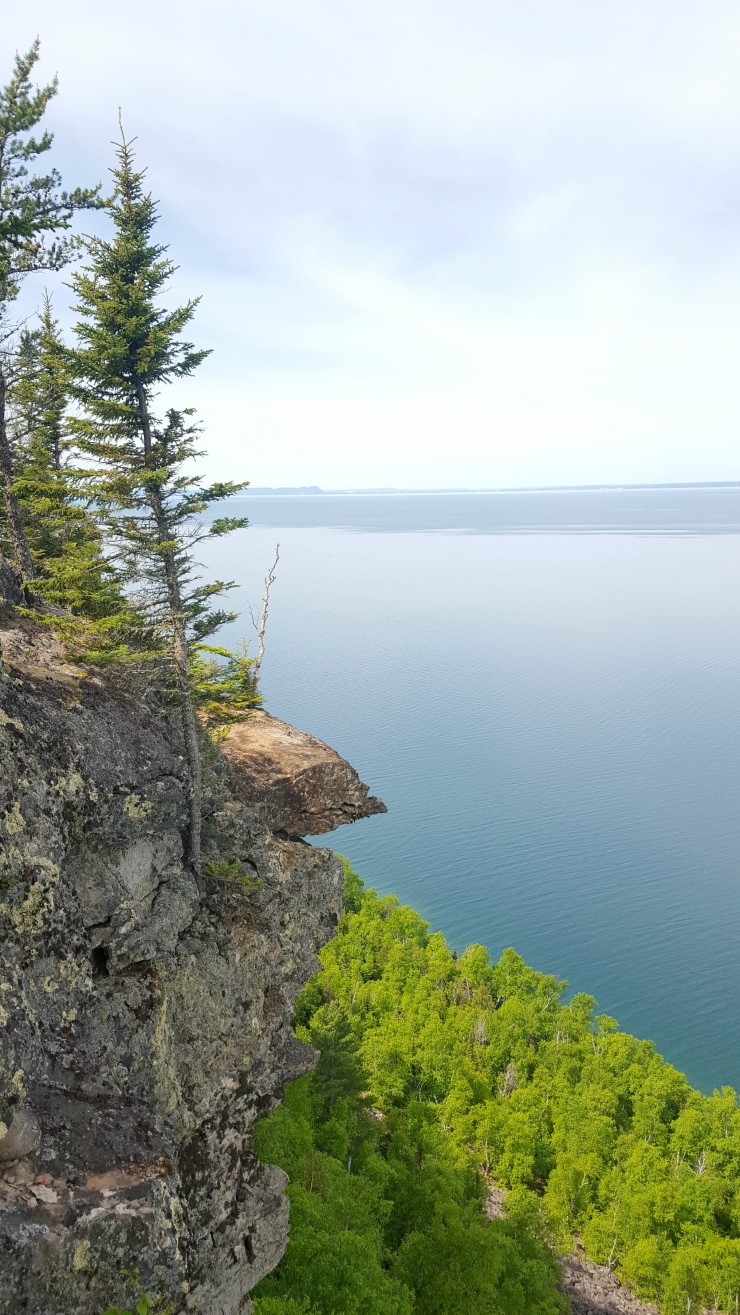 Once you park your car, it is a couple metres to the lookout which is a wooden and steel deck that takes you about 2 metres out from the cliff and about 100 metres above the forest and lake below. The silence at this spot is about as stunning as the view itself.

The Thunder Bay Lookout does not require a hike which makes the breathtaking views of Lake Superior and the surrounding areas accessible for everyone.

The park also features camp-grounds and plenty of hiking trails with other spectacular views of geological features as well as the local wildlife.

Thunder Bay is actually located in the heart of Amethyst country which means there are plenty of Amethyst mines within a relatively short drive of the city.  You can visit one of several open-pit mines for a fun pick-your-own gemstone adventure.

On my bucket list is Fort William Historical Park; a living history site dedicated to portraying the Canadian Fur Trade in the early 1800’s, featuring over 40 re-constructed buildings from the era and area.

Hillcrest Park provides one of the best scenic outlooks over the city, harbour, and of course the Sleeping Giant.

While in Thunder Bay we also explored some of the local restaurants and I was really impressed with the culinary delights we were presented with. So if you need a recommendation for where to eat in Thunder Bay, this is it!

Seasonal and locally sourced ingredients make up the modern Canadian menu at Bight, located along the shore of Lake Superior in the heart of Thunder Bay’s scenic Marina. I had their California Turkey Club – applewood smoked bacon, avocado, tomato, alfalfa sprouts, sweet onion relish, and ancho pepper aiol on toasted bread for lunch paired with a bowl of pork belly soup.  The delicious food and scenic views make a visit to Bight a memorable one.

The exterior of Caribou is a little misleading as it appears plain and unassuming, the interior however is large and warm with a wonderful atmosphere.  I had the Mojo Sirloin which is a 10oz certified angus beef steak brushed with a red mojo bbq sauce and grilled along with several of the creative appetizers. I finished my meal off with a delicious custard topped with caramel and fresh raspberries. Perfection.

The Hoito Restaurant is a Finnish-Canadian restaurant established in 1918 which is found in the bottom floor of the historic Finnish Labour Temple. This spot is a Thunder Bay landmark, well known and loved by locals. Be sure to try the Finnish pancakes with fresh berry sauce.

So there you go. Thunder Bay. Who knew?