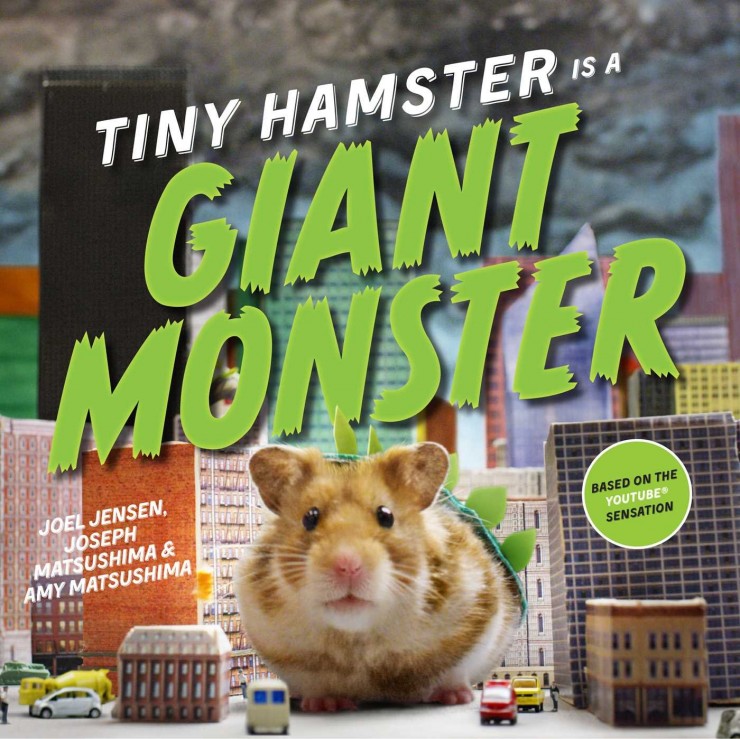 I remember the first time I saw Tiny Hamster Eating a Tiny Burrito after having it shared with me by a friend.  I remember thinking that THIS is why the internet exists and just giggling to myself over the silliness and seriously adorable new YouTube star.  Now Tiny Hamster has an entire series of extremely popular YouTube videos featuring his escapades.  New videos are uploaded monthly.

If you haven’t yet seen the video that started it all, Tiny Hamster Eating a Tiny Burrito, here it is:


The Creators of the videos, Joel Jensen, Joseph Matsushima, and Amy Matsushima. have been working hard to take their YouTube sensation into a Children’s picture book and it is available now!   The book is titled Tiny Hamster is a Giant Monster, published by  Simon & Schuster and even features a YouTube video to go along with it.

Tiny Hamster eats more than tiny burritos when he turns into a giant monster in this debut photographic picture book starring the YouTube sensation Tiny Hamster, whose viral videos have been viewed more than 16 million times.

When Tiny Hamster accidentally eats some mad scientist goo, he turns into a giant, Godzilla-like hamster, stomping through the city and eating everything in sight! This adorably monstrous story perfectly pairs with an all-new video set to release simultaneously with the book. There’s a reason Time deemed the creators of the HelloDenizen YouTube channel “heroes of the Internet”—because Tiny Hamster is just that irresistible.

This is an adorable giant monster story perfect for little kids, and while the hamster goes on a feeding rampage, no people are eaten making it appropriate for even younger children.  He does eat trees, trains, billiards, and more though. 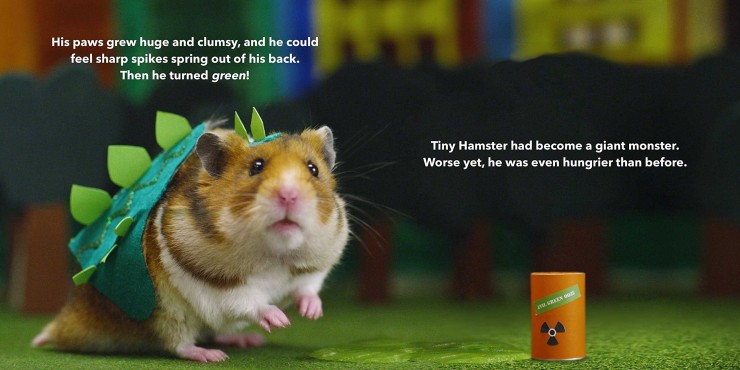 This is actually a really beautiful hardcover book, complete with dust cover.  The pages inside the book are full-page and in some cases full-spread photographs featuring Tiny Hamster turned Giant Monster along with the story itself.

Keira thought the story was funny but she couldn’t stop pointing at the hamster and telling me he was “soooo cute!”.    Of course, once I showed her the Tiny Hamster YouTube videos she loved the book even more!

Seriously, can you blame her though?  What isn’t there to like?

An adorable little Hamster goes Godzilla style and ravages a city with a pretty happy ending.   It’s a fun story that will appeal to many, whether they are already a Tiny Hamster fan or not. 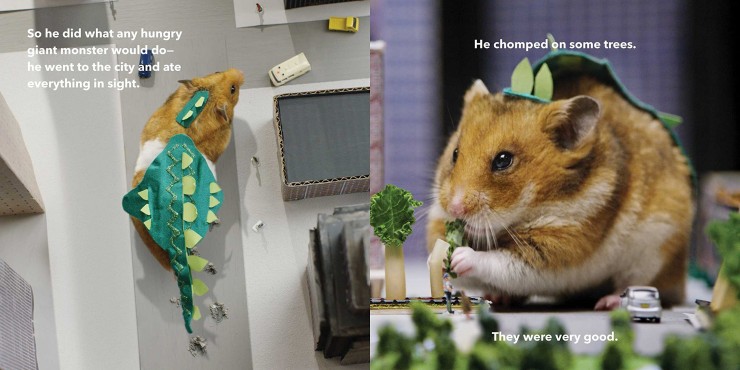 Tiny Hamster is a Giant Monster is not only great for the children in your lives but I think it would make a gift for those who already get a kick out of the Tiny Hamster YouTube videos.

Joel Jensen, Joseph Matsushima, and Amy Matsushima are cofounders of The Denizen Company, a social media marketing company based in California, helping major corporations gain online traffic. Eager to start their own creative projects, The Denizen Company made the first, wildly popular, Tiny Hamster video. They’ve since turned the project into an ongoing series. Tiny Hamster Is a Giant Monster is their first book.
Connect with Tiny Hamster
For more adorable Hamster fun, connect with Tiny Hamster online by checking out their YouTube Channel, or following on instagram, Facebook or Twitter!
What is your favourite Tiny Hamster video?

This is cute and funny!

I've never heard of Tiny Hamster before so obviously I've been missing out :-) He actually sounds like something my grandchildren would love to see - not to mention some of my adult children who are still children at heart. :-)

This is the first time I have heard about this, but it looks so cute & funny too. The videos are awesome and I love the wonderful book as well.

lol Wow I didn't know there was videos. I've only seen the pictures and think they are so funny!

I totally want to buy a hamster now is that wrong. I know that is not the intent of the post but it was so adorable.