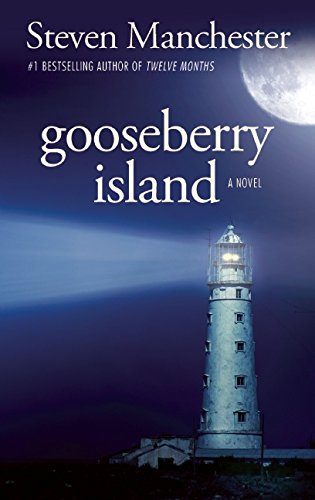 They met at the worst possible moment…or maybe it was just in time. David McClain was about to go to war and Lindsey Wood was there at his going-away party, capturing his heart when falling for a woman was the last thing on his mind. While David was serving his country, he stayed in close contact with Lindsey. But war changes a person, and when he came home very little had the same meaning that it had before – including the romance that had sustained him. Was love truly unconquerable, or would it prove to be just another battlefield casualty?

Gooseberry Island is a nuanced, dramatic, and romantic novel, plumbing the depths of human emotion.

Gooseberry Island is the third Steven Manchester novel that I have had the pleasure of reviewing.  Steven has a way of grabbing at  your emotions and attention with intense story-lines that are not only entertaining but also provide a life (changing) lesson.  This novel is no exception and did not let me down.

The story first introduces us to David, a very introspective and deep young man and Lindsey, who is a little reserved and has been dealing with her fathers PTSD from serving in the Gulf War.  They instantly connect but unfortunately David is off to War for a year in Afghanistan.  Their relationship blossoms through e-mail and Skype and things seem to be going well until David has an experience that changes him forever.

I was struck with just much David’s personality changed from that point onward.  He remained introspective but turned very dark and the effects of PTSD became quickly and horrifyingly apparent.  What really impressed me though was how Steven introduced the many ways that PTSD can affect a person (as well as those around them).  It is also a very real lesson as to how there is often very little support and understanding for those who need it most.

While the story does have a happily ever after ending, it is still quite heartbreaking and leaves you emotionally raw.

PTSD is one of the biggest problems facing soldiers as they return from war. As an experienced veteran himself, Steven Manchester understands that. That’s why, during the promotion of this book, Steven and The Story Plant are going to be working toward helping returning veterans. And we need your help to do that.

From now until January 31, 2015, The Story Plant will donate $1 to the Wounded Warrior Project for every copy of Gooseberry Island that is pre-ordered and sold. All you have to do is email a copy of your receipt and they will make the donation. In addition to that, they will also donate a copy of the e-book to returning soldiers, one donation for each copy sold.

Steven Manchester is the author of the #1 bestsellers, Twelve Months and The Rockin’ Chair. He is also the author of the award-winning novel, Goodnight, Brian, as well as the critically-acclaimed novel, Pressed Pennies, A Christmas Wish (Kindle exclusive), Wilbur Avenue (novella), Just in Time (novella), The Thursday Night Club (novella, released November 2014) and Gooseberry Island (novel, released January 2015). His work has appeared on NBC’s Today Show, CBS’s The Early Show, CNN’s American Morning and BET’s Nightly News. Three of Steven’s short stories were selected “101 Best” for Chicken Soup for the Soul series. When not spending time with his beautiful wife, Paula, or their four children, this Massachusetts author is promoting his works or writing. Visit: www.StevenManchester.com

Sounds like a good book. I want to read a lot more in 2015 so I'll have to add this to my reading list.

This looks great! I'll add it to my TBR list! Thanks for the suggestion!

It sounds like its a good book! I will have to check it out soon