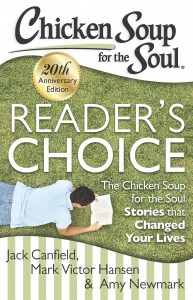 We’re 20! And as part of our 20th-anniversary celebration, we asked our readers to tell us how their favorite Chicken Soup for the Soul stories affected them. You’ll find the stories in pairs in this volume-a new story written just for this book, followed by the story or poem that the reader found so inspiring in one of our past 250+ titles.

You’ll read about the military wife who was mentally prepared for “the phone call” the morning after she read a story about a soldier who lost his limbs. You’ll read about the Vietnam vet who discovered that one of the soldiers he rescued went on to win the Super Bowl four times, which he learned decades later in a Chicken Soup for the Soul story. You’ll read about a birth mother whose 23-year-old found her through one of our stories. All in all, you’ll read 100 stories about epiphanies, attitude adjustments, great advice, motivational tips, doing good, and the amazing connections that people made as a result of these stories.

With each story you get a real look at what a profound effect these stories have had on many readers lives.  Like other Chicken Soup for the Soul books, I was laughing and crying as I read the stories.

Disclosure:  I received a copy of Chicken Soup for the Soul: Reader’s Choice 20th Anniversary Edition in order to facilitate this review.  All thoughts and opinions remain my own.

I love the chicken soup books, have taken most out of the library to read.

I love these books - so inspirational!

This book would make such a great gift, as do many of the Chicken Soup books. I can't believe they've been around for 20 years!