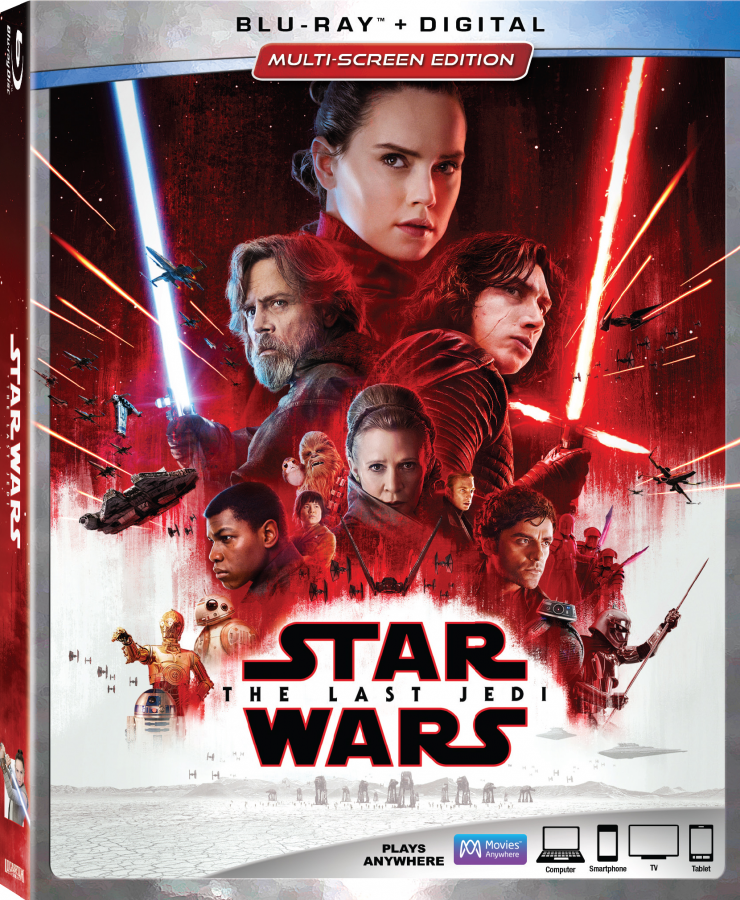 In Lucasfilm’s Star Wars: The Last Jedi, the Skywalker saga continues as the heroes of The Force Awakens join the galactic legends in an epic adventure that unlocks age-old mysteries of the Force and shocking revelations of the past.

Director Rian Johnson takes fans on an intimate journey into the creation of Star Wars: The Last Jedi in a feature-length documentary, explaining his unique interpretation of the Force, detailing the painstaking process of creating Snoke, and deconstructing action-packed scenes from the film such as the epic space battle and the final confrontation. Johnson also reveals two exclusive scenes, featuring Andy Serkis as Snoke prior to his digital makeover, as well as 14 never-before-seen deleted scenes, in addition to his audio commentary.

Star Wars: The Last Jedi is packaged several ways to ensure fans get the most out of their in-home viewing experience. The Multiscreen Edition (formerly the Blu-ray Combo Pack) includes Blu-ray, and a Digital copy, giving viewers the flexibility to watch the film on different devices. Those with 4K Ultra HD capability may opt for a 4K UHD Collector’s Edition, including 4K Ultra HD disc with Dolby Vision and Dolby Atmos, Blu-ray disc, and a digital copy (where available). Dolby Vision delivers greater brightness and contrast, as well as a fuller palette of rich colors. Dolby Atmos places and moves audio anywhere in the room, including overhead. Together on 4K Ultra HD Blu-ray disc, viewers will practically feel the Force in their own home.

Star Wars: The Last Jedi is one of my favourite Star Wars movies since the original trilogy. It has a dark atmosphere but still very family friendly depending on the age your kids. I enjoyed the twists and humour included throughout the film almost as much as the closer look into some of the characters in the film. This is a great option for family movie night!